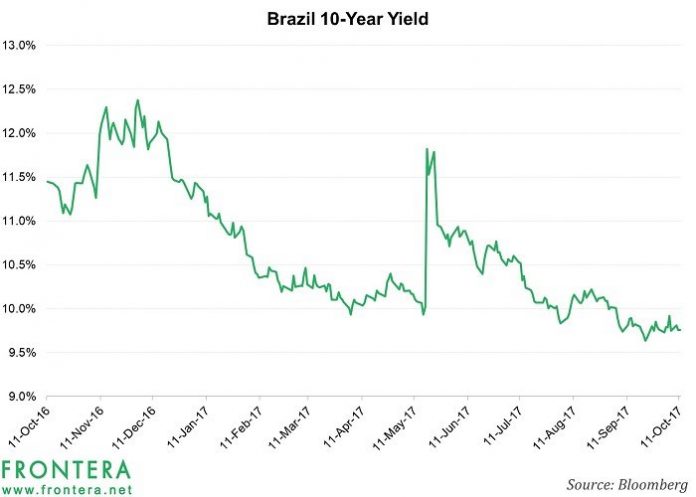 This is post 3 of 4 in the series “Take It ‘Easy’: Monetary Policy in 2017 and Emerging Markets Bonds”

Inflation has been benign in Brazil. In its latest reading for September, it rose 2.5% from a year ago, which is below the central bank’s target of 4.5% plus or minus 1.5%. There are wide-ranging expectations regarding the Selic to be reduced to 7% by the end of this year. 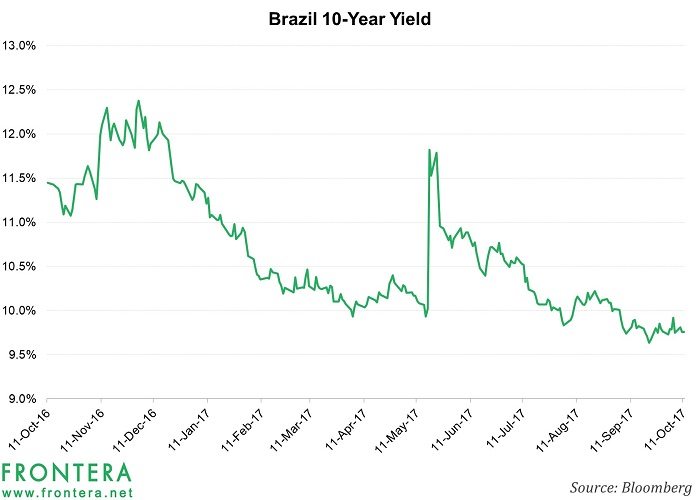 In all likelihood, these expectations will materialize. However, the central bank has already expressed that future rate cuts could be gradual.

Given that the reduction of the Selic to 7% is largely expected, it is already priced into its bonds. At this juncture, aggressive rate cuts in 2018 are not expected and investors in the country’s bonds would need to focus on developments on the political front to drive bond yields once the rate cut cycle draws to a close.

Monetary policy easing in Peru this year has been aimed at spurring economic growth. The country’s economy had grown at a less-than-expected 2.4% pace in Q2 2017 after posting a 2.1% rate in the first quarter.

Inflation has stood at 3.04% in May, higher than the 1-3% range that the Banco Central de Reserve del Peru targets, but the reserve rate was still slashed for the first time this year. Though this seems counterintuitive, it was needed to support the economy and was made possible by views that the factors putting upward pressure on inflation were transitory. 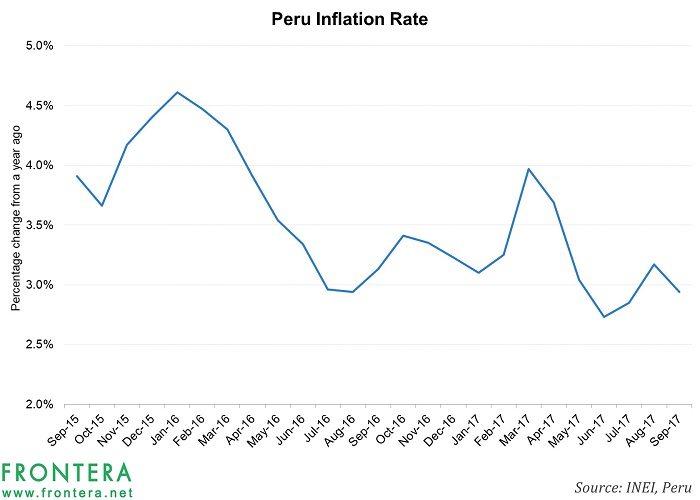 Another indicator which helped the central bank reduce rates was the strength of the Peruvian sol against the US dollar. A stronger domestic currency increases the returns on local currency-denominated bonds when converted to dollars.

Similar to Brazil, the Peruvian central bank may be close to ending the rate reduction cycle. However, it can still consider cutting rates once either this year or the beginning of the next year depending on how inflation moves in response to the most recent rate cut. Inflation slowed to 2.94% in September, and if the impact of the intermittent rise in food prices is only transitory, one more rate cut may be in the offing.

Unlike Brazil and Peru, monetary policy easing may have come to a close for now for both Chile and Colombia.

Chile’s Monetary Policy Rate was last slashed in May, and even though inflation remains benign at 1.5% in September, lower than its 3% target, moderation in the central bank’s stance indicates that until essential, further rate reductions may not be considered.

In its May policy statement, the Banco Central de Chile sounded neutral on further rate cuts by pledging to remain flexible about monetary policy. This was a major change from consideration of additional easing in the April statement, and easing being necessary given market conditions in the March statement.

However, the central bank has headroom to reduce rates further if conditions warrant in 2018.

As far as Colombia is concerned, the Banco Central de la Republica de Colombia may like to see the effect of the rate cut at the end of August on the economy. A bounce back in economic growth may reduce the necessity to ease policy rates further.

This is post 3 of 4 in the series “Take It ‘Easy’: Monetary Policy in 2017 and Emerging Markets Bonds”