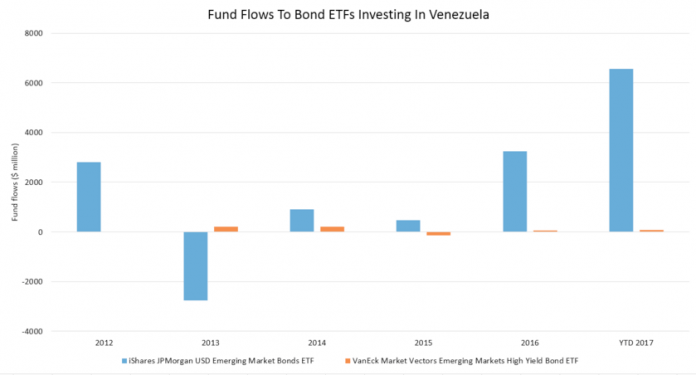 Foreign investors are pulling out of Venezuela

Foreign companies have been pulling out of Venezuela since the country fell deeper into an economic crisis. Despite the chaos in the country, foreign investors are investing in the country’s distressed debt to gain outsized yields. Venezuela’s bonds are available at steep discounts and have attracted investments from the likes of Goldman Sachs, BlackRock, T. Rowe Price, Fidelity, JPMorgan Chase and Ashmore, an emerging market specialist based in London. According to data from DataStream, Venezuelan bonds have yielded 14.1% in 2017 so far.

However, Venezuela’s foreign reserves are deteriorating which is raising doubts on the government’s ability to repay its debt obligations. Inflows into state oil company, PDVSA, bonds cannot offset the massive outflows over the past few years due to the fall in exports, rise in imports, and flight of capital. 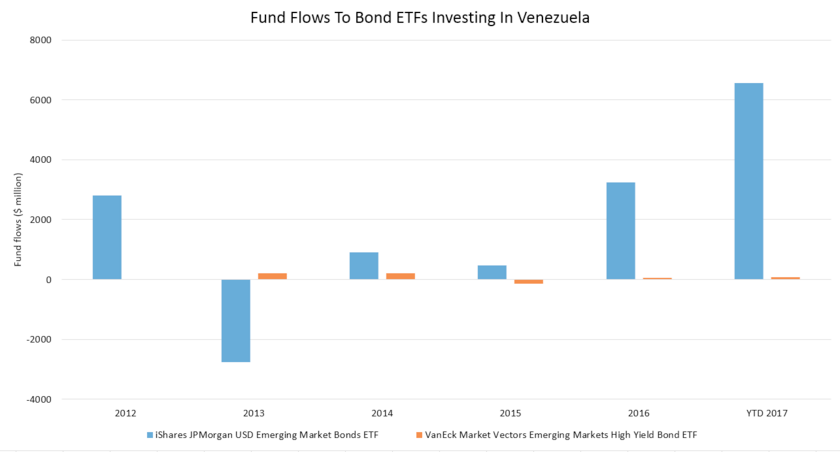 Among the exchange traded funds investing in Venezuelan debt, the iShares JPMorgan USD Emerging Markets Bond exchange-traded fund (EMB) has seen the highest inflows YTD amounting to $6.6 billion. In 2016, the EMB ETF has witnessed inflows of $3.2 billion as investors stayed away from emerging market bonds in fear of rate hikes by the Federal Reserve. The VanEck Vectors Emerging Markets High Yield Bond ETF (HYEM) ETF has seen inflows of $84 million YTD and $54 million in 2016. In 2015 however, investors redeemed $133 million from the HYEM ETF.