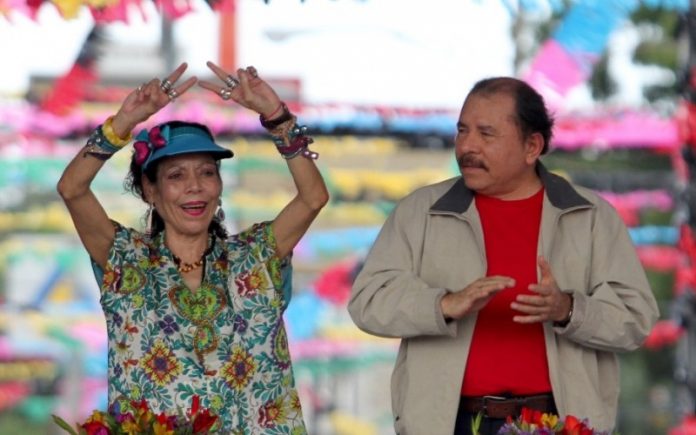 President Daniel Ortega’s move to nominate his wife Rosario Murillo as vice-president has riled the opposition, as the government’s lip service to feminism covers an attempt to create an increasingly autocratic political dynasty.

With national elections scheduled for November 6th, President Daniel Ortega is aiming to secure his third consecutive term. A long-time figure in Nicaraguan politics, Ortega has been criticized, both domestically and internationally, for his dictatorial tendencies. For instance, concerns for Nicaraguan democracy were raised in 2014 when the constitution was amended, allowing Ortega to be re-elected indefinitely.

More recently, the Supreme Court ousted Eduardo Montealegre – leader of the opposition Independent Liberal Party (PLI) in June. Last Friday the court went further, unseating 16 PLI politicians who had refused to acknowledge Montealegre’s replacement. This has only further consolidated the hold of Ortega’s Sandinista National Liberation Front (FSLN) party (which holds more than two-thirds of the seats) in the national legislature.

Keeping it in the Family

The latest affront to the opposition came yesterday, following Ortega’s announcement that he has chosen his wife, Rosario Murillo, as his vice-presidential candidate. Ortega’s opponents have pointed out that such a move violates the constitution – characterizing the decision as further evidence of his dynastic ambitions. While initial polling places Ortega with some 65% of the vote, his choice of vice-president has galvanized the opposition. Despite this, Ortega is likely to win the November election, a turn of events that would cast a negative forecast for Nicaragua’s democratic prospects.

The president stated the vice-president had to be a woman, citing Murillo the obvious choice. Conversely, opponents of the government, such as former opposition congressman Eliseo Nunez have called the move nepotistic and farcical: “to me it is an insult – not just to all Nicaraguans, but also to the entire Sandinista movement – because it says that in Nicaragua there are no Sandinistas or Sandinista women who can aspire to this role; only the Ortega-Murillo family.”

Murillo has been the driving force behind Ortega’s change of style, with paramilitary uniforms being replaced by civilian clothes, pink campaign posters, and less confrontational rhetoric. It is important to note that these changes are not merely cosmetic, as many Nicaraguans already surmise that Murillo is pulling the strings. Even before her nomination as vice-president she has been the official spokesperson of the government, with ministerial rank, as well as chair of all ministerial meetings.

Despite Appeal to Feminism, Violence Against Women Remains Rampant

Murillo and Ortega have cobbled together an odd mixture of progressive socialism, with ultra-conservative Catholicism and Murillo’s various new age beliefs. Murillo has become the regime’s poster girl and cheerleader, one who is campaigning for Ortega with feminist slogans, touting empowerment and pointing to the high numbers of female officials.

It is true that Nicaragua ranks very highly in terms of gender parity in positions of power, yet local feminist organizations continue to feel unrepresented, as female politicians in the Ortega government are more loyal to the FSLN than any feminist agenda. Outside of the political elite, life for ordinary women in Nicaragua remains fraught with dangers.

Moreover, despite the government styling itself as pro-feminist, Nicaragua continues to be one of only six countries that forbids abortion under any circumstance. The country also has very high rates of underage pregnancies, the second highest rate of domestic abuse in Latin America, and many incidents of femicide (the killing of women because they are women and/or considered property). President Ortega himself is even accused of sexually abusing his step-daughter for years, yet has hidden behind presidential immunity and Nicaragua’s short statute of limitations for sexual violence.

These dismal facts exist alongside Nicaragua’s deteriorating economic freedom and ease of doing business, and HDI scores (ranked 108th, 119th, and 132nd in 2015 respectively). The one bright spot is Nicaragua’s comparative safety, as the country is not faced with the levels of gang violence of other Central American states. Furthermore, while openly anti-American, especially given the FSLN’s struggle against the Contras, Nicaragua has yet – unlike Venezuela – to become antagonistic towards American and other foreign firms. This is reflected by a GDP growth rate that has averaged 5% in the last five years, as well as foreign investment, notably a $50 billion Chinese canal building venture.

Despite this, Nicaragua is facing economic uncertainty and slowdown, as the commodity supercycle ends, Ortega’s ally Venezuela faces implosion, and inflation ticks up: reaching 4% in 2015, thus eroding the gains from a 4.9% GDP growth rate.

Don’t Cry For Me Nicaragua

Political dynasties are commonplace in Latin America, yet Ortega has justified his choice by invoking feminism, a new take on an old tactic. Ortega has ample inspiration of other power-couples at hand, be it from Juan and Eva Peron (herself a feminist campaigner), or more recently the dubious power plays of Nestor and Cristina Kirchner. Ironically, while Ortega’s nomination of his wife has led to accusations of dynasty building, Ortega himself came to power on the heels of the Nicaraguan revolution against the Somoza dynasty in 1979.

Another important influence is likely the current political situation in the United States. The 2016 U.S election also puts American political dynasties in the spotlight, as pro-Ortega observers in Nicaragua can point to the back and forth between the Bushes, and (if Hillary wins) Clintons over the last 25 years to counter allegations of a nascent Ortega-Murillo dynasty.

With Hillary Clinton (herself part of another political power couple) securing the Democratic nomination and promoting herself as a feminist, Ortega is likely taking notes.

As feminism continues to increase its profile in mainstream political discourse, Ortega can draw on the FSLN’s revolutionary Marxist-Leninist past (and its attendant calls to equal opportunity) to draw a link to modern feminist calls for equality, to re-legitimize the party in the post-Cold War era. By coating the party with a thin layer of ‘feminist’ rhetoric, Ortega can try to shake off his incumbent status and regain some revolutionary zeal by claiming to again stand at the frontier of the people’s struggle.

Furthermore, by adopting the veneer of feminism, Ortega and Murillo can claim a moral high ground and – to a certain degree – insulate themselves from Western criticism. Just as autocrats have draped themselves in the language of independence and human rights, so too can the language of feminism be co-opted in the war of words with the United States and others. In doing so Ortega forces the U.S to appear hypocritical when criticizing a regime which allegedly supports American ethical standards.

Jeremy Luedi is a senior analyst at Global Risk Insights