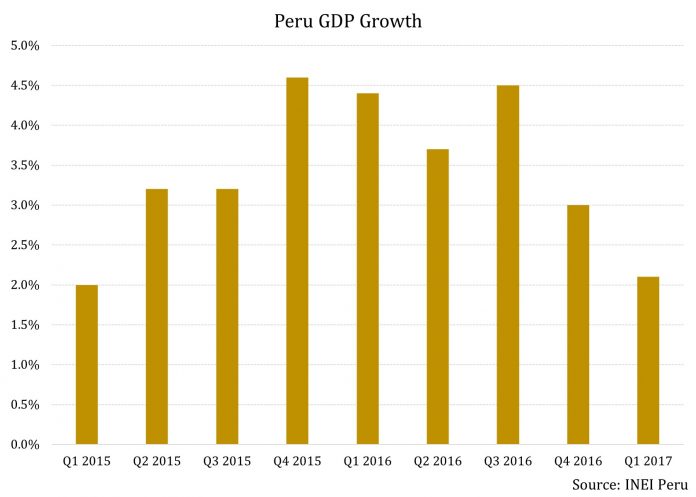 This is post 2 of 3 in the series “Can Peruvian Equities Brave The Rough Weather?”

Macro factors have had a major bearing on the stock market in Peru this year. Monthly economic growth in the country fell to near an eight-year low of 0.17% in April from a year ago as construction and manufacturing activity plummeted.

The country’s central bank also reduced the growth forecast for 2017 to 2.8% in June from 3.5% projected in March.

Floods in the first quarter of this year were the main reason for the sharp decline in economic activity, particularly in construction.

The country’s Ministry of Economy and Finance has held that the floods damaged infrastructure worth about $4 billion and has estimated that it may have shaved close to 0.5% of economic growth off the first quarter of this year with construction having nose-dived by 5.3% in the same period.

The other challenge is the corruption scandal.

Due to this, the country has witnessed a drop in investment confidence, which has resulted in an overall decline in investment. Current President Pedro Pablo Kuczynski has promised a clean-up, but it will take time for investors to regain confidence.

As far as the damage from floods is concerned, President Kuczynski has said that reconstruction and new infrastructure will cost $9 billion over the next five years. This will undoubtedly push the country’s fiscal deficit up. Central Bank President Julio Velarde stated that the institution expects a higher fiscal deficit of 3% of GDP in 2017 and 3.5% in 2018.

However, the spending plan will be helpful in raising the country’s economic output. Though the impact was severe enough to slow down economic growth this year, the central bank expects GDP to grow by 4.2% in 2018 – a tad higher than previously estimated.

The challenge posted by the corruption scandal is a common thread across the region, hence it’s not a challenge for Peru alone. The government’s response so far has been swift, and given the robustness of the economy, the country stands a better chance of seeing investors return earlier than most of its Latin American peers. But this will also depend on the future course of action taken by the administration.

What do these and other developments mean for Peruvian equities going forward? Let’s look at this in the next article.

This is post 2 of 3 in the series “Can Peruvian Equities Brave The Rough Weather?”