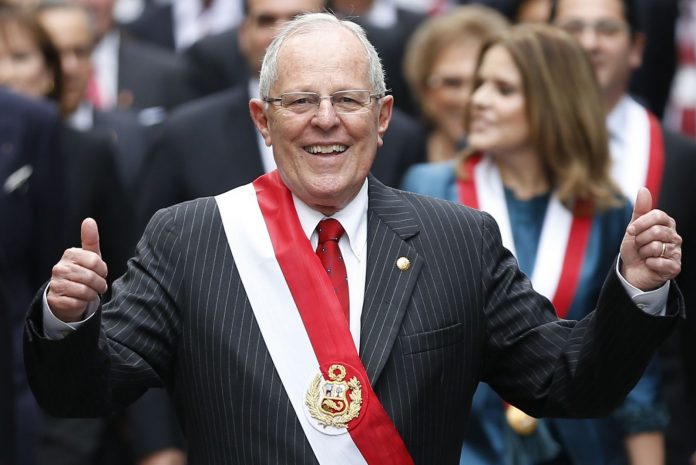 President Kuczynski is shaking up Peruvian politics with a roll-up-your-sleeves approach to reviving economic growth. His rhetoric could reverberate throughout a divided Latin America.

Peru’s new President, Pedro Pablo Kuczynski, hit the ground running — literally. Before his first cabinet meeting, PPK (as he is popularly known) took his cabinet to a fitness workout session in front of Palacio de Gobierno, seat of the country’s executive branch. He intended to show the commitment of his administration to sports and health, but also to send a very graphic message to the political establishment: Peru is ready to shake things off.

A few days earlier, Kuczynski made his inaugural address calling for a social revolution. With 23% Peruvians now living below the poverty line, he vouched to modernize the country, fight corruption, reduce income inequality and provide access to basic services for all. To support his ambitious social program, he intends to improve the country’s business environment, boost foreign investment and increase public spending. Nevertheless, he will have to face fierce political opposition and a sluggish economy after a decade of the Peruvian Miracle. He aims to put economy back on the 5% GDP growth mark by 2018.

Kuczynski defeated Keiko Fujimori — daughter of former president Alberto Fujimori, who is now serving a 25-year prison sentence for corruption and crimes against humanity — in a run-off by a 39,000 vote margin. With Fujimori winning the first round, he had to mobilize the left and the anti-fujimoristas, which he successfully did by harnessing the widespread dissatisfaction with old fashioned politics.

Yet, his party, Peruvians for Change, obtained a meager 18 seats in the parliament, while Popular Force, Fujimori’s party, will control the house with an overwhelming majority of 78 out of 130 seats. In a unicameral parliament, the new government will have to find a happy medium with an embattled opposition to enact its reforms.

After a remarkable growth burst (an average 6.4% between 2003 and 2013) largely fueled by the commodity boom, the country’s economy seems to be losing pace. The slowdown is due to the falling prices of gold and copper (half the country’s exports), but also, in a large part, a result of Peru’s inefficiencies. To start growing again and reduce the country’s reliance on volatile commodities, the new president has proposed bold reforms to unleash a new cycle of growth.

Kuczynski plans to tackle endemic corruption and red tape, two of the most pressing issues hindering investment and growth. Moreover, he will concentrate on changing rigid labor laws — a business-sector complaint that has led to nearly two-thirds of Peru’s workforce being hired informally. The crackdown on informality is one of PPK’s main platforms to curb tax evasion, increase income, and pay for tax breaks aimed at attracting foreign direct investment. He has set a bold deadline: by the end of his term in 2021, 60% of jobs will be on the books.

Together with the tax cuts, he also plans to increase public spending on strategic infrastructure projects to stimulate the economy. Kuczynski says he will unlock some $20 billion in investments in mining and energy. He also intends to spend another $15 billion on projects to achieve his goal of providing access to water and sanitation to all Peruvians. To that end, he created a new Ministry of Regional Support focused on improving the efficiency and increasing control over public spending. Additionally, the Peruvian investment promotion agency, ProInversión, will be decentralized to reduce project time frames and make them more adapted to local needs.

Kuczynski and the future

To finance all this, PPK will rely on the country’s low public debt— which will give him room to spend — and a solid credit rating. During the campaign, Kuczynski had already garnered support from foreign investors eager to finance his plans. Furthermore, the country has accumulated a remarkable stock of foreign currency during the golden days of commodity bonanza, which could also be used to pay for the projects.

Getting the parliament on board may be easier than predicted, since raising public spending is one the few policies where PPK and Fujimori’s opinions converge. To speed up the process, the administration will very likely favor public-private partnerships, increasing the opportunities for foreign investors.

Kuczynski’s victory over Fujimori has been widely applauded by international markets — mainly because he represents the maintenance and improvement of the business-friendly policies implemented by his predecessor. Yet, most of the public — and many analysts — remain skeptical about the viability of his minority government and his capacity to unite Peru, criticizing him for being an out-of-touch representation of the country’s upper-class.

Indeed, PPK is an outsider, and his biography epitomizes a cosmopolitanism which very few Peruvians can relate to. He was educated at Oxford and Princeton, worked for the World Bank and Wall Street, and has close family ties with Jean-Luc Godard and Jessica Lang. More tellingly, he had to renounce his American citizenship to run for president.

Nevertheless, his genial and spontaneous style seems to be pleasing the public and bringing new life to a job normally seen with contempt and disregard by Peruvians. Despite the remarkable economic performance of recent years, presidents have been consistently rated poorly. Recent president Ollanta Humala left office with an approval rating of 19%, even with an expected GDP growth of around 4% for this year.

More importantly, Kuczynski’s victory is mainly due to an unexpected alliance with the country’s left — something unseen in Latin America — and the possible birth of a new non-partisan approach to a continent rapidly plunging into polarized politics. How he will conduct negotiations with the opposition and if he will eventually succumb to traditional patronage remains to be seen.

Still, his resolve to get things done, decentralization push, and anti-corruption rhetoric could reverberate among the continent’s increasingly restless and discontent population. Beyond a mere antithesis to the declining leftist reign in Latin America, Kuczynski might well be the leader the region so badly needs.