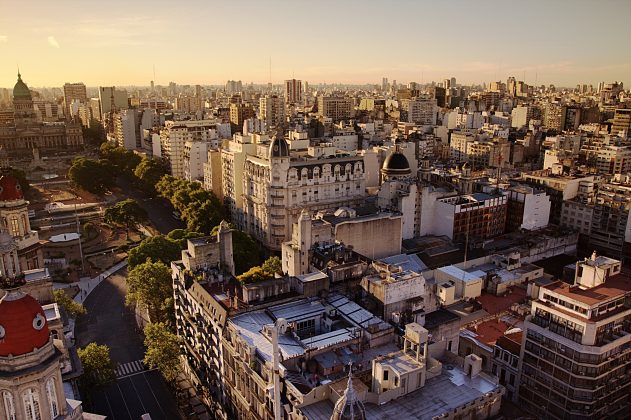 On 10th December 2015, over a year ago, Macri assumed office as President of Argentina from the complicated Cristina Fernandez de Kirchner.  Kirchner and her late husband who was President for almost four years preceding his wife had many successes and failures during their time at the helm, but it was clear that things were heading down a dangerous path in Argentina.

During Kirchners’ tenure, inequality, as defined by the GINI coefficient declined by 20% (see figure below), this was laudable as it was also matched by an increase in median household income from ~$1,300 annually to ~$2,700 in 2015, that is annual growth of 6.2% which is commendable, but what this statistic conceals is that median household income reached a peak of ~$5,700 in 2013 and fell -47% since.  This is largely caused by currency problems, as the Argentinean Peso during the Kirchners’ time fell -70%.  This was in spite of hard-fought efforts by Christina Kirchner to control the value of the currency. 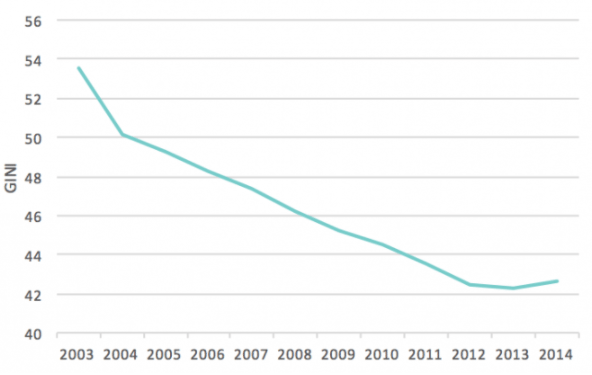 The Kirchners’ mix of socialism, populism, and authoritarianism detrimentally impacted Argentina’s image abroad.  Image is not simply a branding exercise but also resulted in poor levels of foreign investment.  One of the major reasons for a sharp drop in foreign investment in the latter part of Christina Kirchner’s presidency was her erratic decision to nationalize YPF, Argentina’s national oil producer which had been privatized in 1993.  This was done without any negotiations with Repsol, the other owner of YPF.  YPF’s performance declined substantially and forced Argentina to import energy, creating an inflation spike.

Areas of improvement where the Kirchners did do well, include an improvement in education and access to healthcare.  However, this was balanced by targeting farmers with excessive taxes, particularly on soybeans and currency controls which had a very material negative impact on the average Argentinean.  In the Kirchners’ worldview, the economy was a system where certain parties exploited other groups.  There was no vision or infrastructure to allow the economy to grow where all segments of the population could improve their lives.

In this environment, Macri took over, the former Mayor of Buenos Aires and a sharp capitalist who was ready for shifting Argentina away from disastrous policies which favored present consumption at the expense of future growth.  One of Macri’s first steps was to remove all currency controls and allow the currency to freely float.  The result was a 1-day drop of the currency by -30% causing significant pain to the economy.   Important to keep in mind though, that most Argentines were never able to transact FX at the official rate, and this drop after Macri removed controls is more reflective of the actual effective FX rate.  Controls are impossible to maintain when there is limited confidence in your currency and you lack any firepower in terms of FX reserves to maintain your controls.

Macri cut export taxes on several commodities including major cash crops such as beef, wheat, and corn.  Macri also reduced export taxes for soybeans by 5%.  This was done in his first week in office.  The impact of this was significant, for example, corn exports increased 21% in 2016, and beef by 13%.  He could have certainly done more, but this was useful in placating angry farmers, and nobody wants angry farmers.

In April 2016, Macri ended a 15-year saga that Kirchner had made a farce, by agreeing to pay $9.3 billion to holders of Argentina’s notes that the country defaulted on[7].  In one action, Macri won the respect of international investors and built credibility for the new government, allowing Argentina to borrow $16.5bn and later another $20bn from international markets.

Macri has been fortunate with a victory for Trump.  Trump and the Macri family go way back to a real estate deal in New York which is outlined in ‘Art of the Deal.’  We can expect materially better relations between the two countries and foreign investment from the United States over the next 4 – 8 years.  The two met last week and by both accounts, the meeting went well.  Exports to the US in 2016, under Macri were up 30%, primarily due to biodiesel sales.

What to expect going forward

Macri’s work is just getting started and he does not wield a tremendous amount of power, given lackluster economic performance last year from the economy turning around and limited control for his party.  However, indications are that inflation is now under control and we can expect up to 2.2% GDP growth in 2017.

Argentina has a material amount of natural resources, including significant gold, copper, oil and natural gas.  Major projects have long been delayed such as Pascua Lama, and shale field Vaca Muerta.  Macri needs to ensure that major energy companies are secure and that investments will be respected within the laws of Argentina.

Macri would like to reorient the economy towards technology, this will be a significant challenge.  Within Latin America, Brazil, Mexico, and Chile are eons ahead of Argentina.  They have developed a strong ecosystem for startups, innovation, and education.  Argentina has languished for more than a decade under Kirchner and suffered a significant brain drain with Argentines going abroad for education and often staying there.

The reception for Macri has been largely positive from the international community because Argentina was being operated so terribly.  Someone halfway decent who is sane is very welcome.  To draw an extreme parallel, if Maduro in Venezuela or Kim in North Korea are replaced by a sane person, no matter how they err, they will be heroes internationally.

Macri has his share of corruption, such as the debt forgiveness of his own company.He may also ignore the needs of those hoping to remove barriers towards upward mobility in Argentinian society and weaken the advances that Argentina’s indigenous population have made.  These failures are what we worry the most about. The stock market in Argentina is up 80% since he took office and the currency has stabilized.  We remain very optimistic about the future of Argentina… for now.