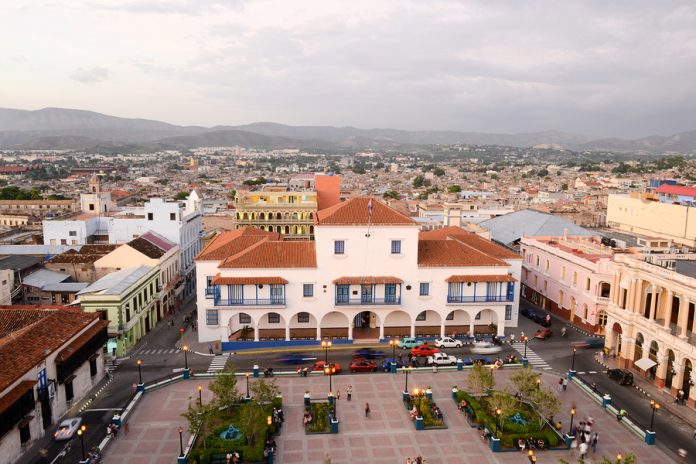 On 8 November, Washington imposed fresh sanctions on Cuba, targeting the tourism and business industries. The latest actions of the Trump administration, while serving to erode Barack Obama’s diplomatic efforts with Cuba, must be interpreted within the wider context of prolonged historical tension between Washington and La Havana.

The latest US sanctions against Cuba pose a major obstacle in the way of trade and travel relations between the two countries. The restrictions, which directly target many state-owned Cuban businesses, aim to prevent the Communist government from benefiting from American capital. For Americans, travel and business opportunities in Cuba are significantly reduced. This is the latest example of President Trump’s determination to undermine the policies of his predecessor.

The new restrictions forbid American engagement with some 180 Cuban businesses. As part of the crackdown on US trade with Cuba, the hotel industry is targeted severely. 83 of the Island’s hotels are blacklisted, precluding American tourists from staying there. Such hotels include Ambos Mundos, where Ernest Hemingway frequently sojourned. In addition, tourist agencies, shopping malls, marinas, and liquor producers with links to the Castro administration are affected and fuel the threat to tourism on the island.

The sanctions also threaten US businesses seeking investment opportunities in Cuba.American industries will be prohibited from investing in the Mariel Special Economic Development Zone. This is a sprawling industrial hub west of La Havana that the Castro government is using to attract foreign investment. Currently, 27 companies from Europe, Asia, and Latin America have received permission to inaugurate business on the 115,000-acre site. This will be a blow to US companies with interest in the Mariel zone, as other international investors will benefit from the new investment constraints.

The actions of the White House against Cuba come after President Trump restored the annual tradition of voting against a UN resolution that denounces the US trade embargowith the island. Last year, Barack Obama signalled historic change in the dynamics of US-Cuban relations. His policy to restore diplomatic relations with Cuba and the abstention to vote against the UN resolution appeared to symbolise closer relations between the White House and the Castro administration. However, Trump’s revival of Cold War relations between the two countries appears to subvert Obama’s ambitious diplomatic efforts.

Those in favour of isolating the Castro government emphasise democracy and human rights as crucial elements underscoring Trump’s Cuba policy. Since the decision to impose a trade embargo on Cuba in 1962, Washington has argued that the government in La Havana has impoverished its people and failed to fairly distribute the capital that it has accumulated. Nikki R. Haley, the US ambassador to the UN, stated that Trump’s position on Cuba reflects “continued solidarity with the Cuban people and in the hope that they will one day be free to choose their own destiny.”

Along the same lines, Treasury Secretary Stephen Mnuchin posited that the latest sanctions aim to ”to channel economic activity away from the Cuban military and to encourage the government to move toward greater political and economic freedom for the Cuban people.” He believes this can only be achieved through supporting the ”private, small business sector” in Cuba, as the alternative means economically and politically supporting the Communist government.

In contrast, the Island’s political leaders assert that the sanctions directly damage the Cuban people. Josefina Vidal, Cuba’s main US affairs diplomat, stresses that revenue for the Cuban government is revenue for Cuban society, with strong investment in the areas of education and healthcare.

The position of Trump or the United States?

Since coming to power in January, eroding the Obama legacy has been a primary goal for Donald Trump. There is enough evidence to suggest that the President’s destruction of Obama’s Cuba-friendly policy is an attempt to differentiate himself as much as possible from his predecessor, already evidenced in healthcare and the Iran deal. On the other hand, Trump has only restored a position that accurately reflects US scepticism of Cuba since the Cold War era. 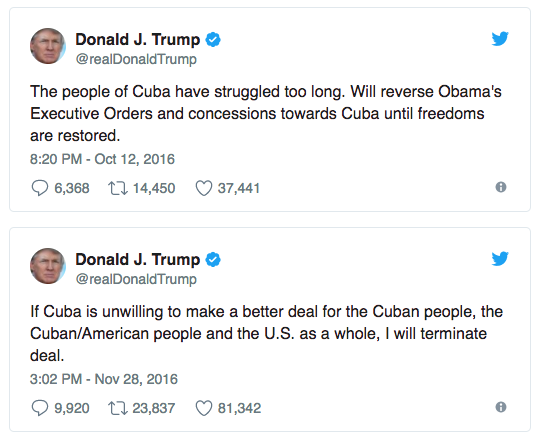 The new sanctions only reintroduce measures against travel and business that were present before Obama’s historic thawing of relations. The only change is that the latest restrictions emphasise the significance of the Cuban people. Under the ”Cuban people” category, authorised travelers must interact with private individuals and engage in activities that enhance civil society on the island.

It is also important to note that it took Obama until the end of his presidency to restore diplomatic relations with Cuba. His rush to ”get things done” before the end of his second term may have compromised a meticulously thought-out long term solution to the impasse between Washington and La Havana. In 2015, Roberta Jacobson, the chief US negotiator for the normalisation of US-Cuban relations, was cautious of raising expectations regarding the historic restoration of diplomatic relations between the two countries given the treatment by the Cuban government of its people. Despite this uncertainty, in 2015 US-Cuban diplomatic relations were normalised.

The sentiments of hardline politicians highlight the continued existence of distrust that America has towards Cuba. Cuban-American lawyer, Senator Robert Menendez, strongly opposes the Obama policy and claims the latest sanctions are too lenient on the Castro government. Although he recognises the sanctions as a step in the right direction, he is concerned with the fact that they don’t affect existing trade and travel transactions between the two countries.

Since the election, Trump has displayed a conspicuous position regarding Cuba. During the 2016 presidential campaign, he stated that the US should not prop up the Cuban government, thereby taking a dig at Obama’s diplomatic efforts to normalize US-Cuban relations. In June, the president announced he was retracting Obama’s ”terrible and misguided deal” with Cuba. He also labelled the former president Fidel Castro a ”brutal dictator”, making the links between the revolutionary and current regime of Raul Castro clear.

The current stand-off in relations between Washington and La Havana continues, with the foreign ministers of North Korea and Cuba having met on 22 November to reinforce their unity against the United States and its ”unilateral and arbitrary lists and designations”. The 86-year-old Raul Castro is expected to leave power in 2018, but with his likely successor – Vice President Miguel Diaz-Canel – expressing a strong stance against US “imperialism”, the animosity is likely to continue, further undermining the prospects for US investment in the country.

Niall Walsh is an Analyst at Global Risk Insights. As originally appears at: https://globalriskinsights.com/2017/11/trump-normalisation-relations-cuba/