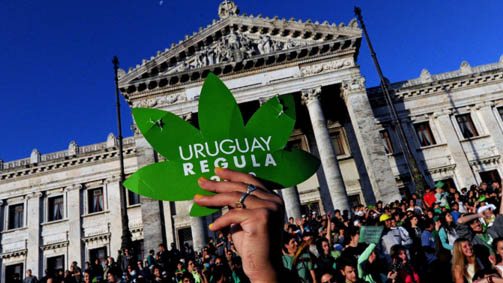 Here at the Fringe, your authors have grown tired of writing about ongoing economic troubles in Latin America. We’re happy to report, though, that there is a bright spot. Tiny Uruguay – the country with three million people and ten million cows – has notched growth rates of six percent or better so far this decade. The global property firm Cushman & Wakefield has just listed Uruguay as the second-most attractive real estate market among 42 emerging markets worldwide. And interestingly, the country’s largest trading partner is not neighboring giant Brazil – but China, due to substantial exports of soya and other agricultural products.

And Uruguay, a traditionally left-leaning democracy, is surprisingly free-market in a unique way. Two years ago it became the first country to not only legalize marijuana usage, but to tax and regulate it. The legislation was passed by former president Jose Mujica – a maverick head of state on a continent that breeds them with increasing regularity. “Pepe”, as he was known during his five-year term, donated 90 percent of his salary to charity, drove a 1987 VW Beetle to the office, and lived on a run-down farm in Montevideo’s outskirts. His government justified the decision to tax and regulate marijuana as an alternative to what Latinos call “Plan Colombia”, whereby US DEA agents employed draconian enforcement measures that alienated millions in Latin America and has sparked widespread violence from Paraguay to Juarez. Needless to say, he left office this year with record approval ratings.