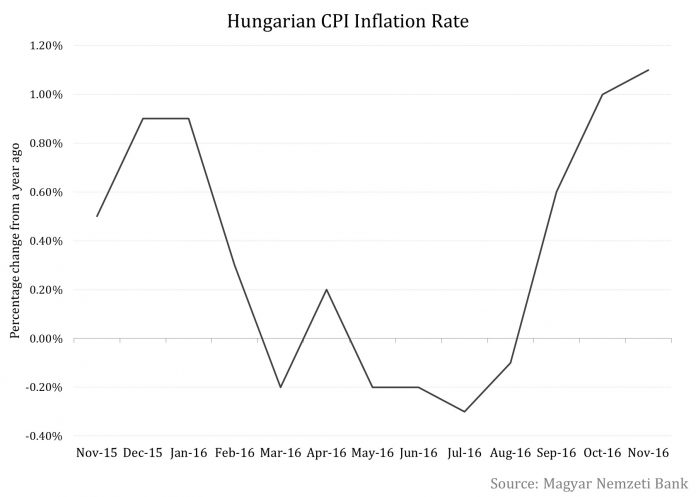 Hungary’s central bank – the Magyar Nemzeti Bank – in its December 2016 policy statement, noted that economic growth in the nation continues to pick up pace. And though capacity utilization has scope for improvement, the dampening impact of the economic environment at home is slowly losing its grip.

The central bank informed that the Hungarian economy grew at a 2.2% annual pace in Q3 2016. This improved showing was on the back of robust household spending. This is reflected in the increase in October retail sales.

Among other indicators, industrial output has declined on a year-on-year basis in October while the unemployment rate continues to fall. An increase in wages indicates that household spending may increase further going forward, thus providing further fillip to future economic growth.

According to the Magyar Nemzeti Bank, Hungary’s GDP (gross domestic product) growth rate is expected to be 3.6% in 2017. This is sharply higher from the 3.0% rate projected earlier. It is also up from the 2.8% projection made for 2016. Meanwhile, for 2018, the central bank expects the economy to grow at 3.7%.

Even after sizable revisions to the pace of GDP growth, the central bank’s estimates pale in comparison to those expected by the government. Substantial wage increases agreed upon in November, combined with corporate tax cuts, have led government to project GDP growth for 2017 at 4.1%, up from 3.1% projected earlier. This pace is expected to pick up to 4.3% in 2018, up from 3.4% expected earlier.

The stance of monetary policy hinges on the state of inflation in an economy. This is no different for the Magyar Nemzeti Bank. The Hungarian central bank aims at a 3% annual pace of inflation in the medium-term. From the graph above, one can see the difficult situation the central bank has faced in that regard.

However, there are encouraging signs: CPI (consumer price index) inflation rose by 1.1% in its latest reading. According to the central bank, CPI inflation should reach its mandated level in H1 2018 – slightly earlier than expected.