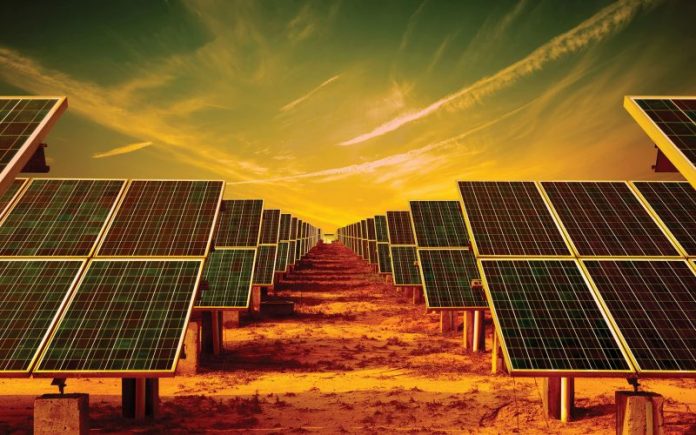 The MENA region saw over 2 GW of new solar capacity tendered in 2016, and 2017 looks to easily surpass this level as hundreds of billions of dollars begin to flow into green energy in the Arab world.

On April 6th, Middle Eastern nations announced an ambitious energy project to establish an Arab Common Market for electricity. The energy ministers from 14 Arab countries signed a memorandum of understanding, confirming their commitment to the development of an integrated electricity supply system for the Middle East. This announcement in itself is very important, yet it also comes at time of even larger changes in energy in the Middle East: solar power. A future common electricity market will see an ever increasing role for solar power as countries across the Middle East are heavily investing in renewables.

Ongoing low oil prices together with rising demographic concerns are increasingly motivating MENA states to invest in a more secure and diversified energy portfolio. With an estimated population of 692 million by 2050, the MENA region will require a substantial increase in generating capacity to meet future energy demands. This point has been hit home this year as Fitch has warned that most oil producers will not break even in 2017, based on a predicted average price of $52.50 per barrel. Most MENA countries need substantially higher prices (ex: Saudi Arabia needs $74) to balance their budgets.

These fiscal pressures risk instability, both in the short and long-term, not only due to general budgetary concerns, but the risk of energy-related social unrest. Erratic domestic electricity supply has been a main instigator of social unrest in Iraq, Lebanon and Egypt. To this end a common electricity market and grid would help mitigate localized energy disturbances, aiding both economic and social stability.

It appears that MENA governments have taken heed, as “over the past year we have seen huge investment in renewables […] It seems clear that this is a trend set to continue as nations in the Middle East strive to reduce their carbon footprints and increase generation capacity,” notes Anita Mathews, director at Informa Energy Group. In the GCC alone, which accounts for 47% of MENA generating capacity, some $316 billion worth of investments are needed by 2020. 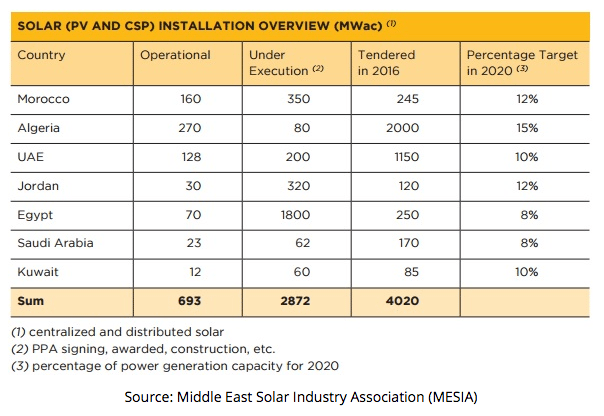 Across the MENA region, hundreds of billions of dollars worth of investment opportunities are emerging, both in solar power production and the wider electricity supply chain. Consequently, alongside Chinese and Japanese investors, EDF – Europe’s largest energy producer – is looking to acquire renewable assets in the Middle East, in order to diversify its primarily nuclear-based portfolio and capitalize on growing market demand. This demand is poignantly highlighted by the fact that the MENA region tendered over 2 GW of new solar capacity in 2016.

In the GCC, power construction contractor awards increased 14% to $25.5 billion in 2017 over 2016. The highest increase was in Saudi Arabia, which saw a 50% increase to $12.35 billion in contractor awards versus 2016. This comes as Saudi Arabia launched its first competitive global tender for utility-scale solar power projects in January. Government renewable energy initiatives and smart city development has also boosted the regional cable market, which is expecting consolidated annual growth rates of 8.4% through 2023, leading to the creation of a $12 billion market. Again the growth rate is higher (9%) for the Saudi cable market through 2023. Similarly, the thermal energy storage sector is expecting a cumulative annual growth rate of 11% between 2017-2022, reaching $6.2 billion. This is being driven by renewable investment in the MENA region, which is quickly becoming the largest market for thermal energy storage.

These trends are MENA-wide, but are particularly noticeable in the GCC, and Saudi Arabia in particular. The Kingdom has announced its Saudi Arabia Vision 2030 and King Salman Renewable Energy Initiative, as well as created the Energy, Industry & Mineral Resources ‘super-ministry’ in May 2016 to streamline decision making. Unlike previous fitful efforts, these latest efforts are different because “they represent the highest level of commitment to renewable energy ever seen from the Kingdom,” argues Ahmed Nada, Middle East VP at First Solar. Indeed, the involvement of King Salman and Crown Prince Nayef indicates a proactive Saudi leadership that bodes well for ongoing energy diversification efforts.

This is supported by plans to break-up the state-owned utility, Saudi Electricity Co. to increase efficiency. This move has generated significant interest from domestic and international investors. Shifting to solar power, will also save the Kingdom money in energy generation, as currently one third of the country’s three million bpd oil consumption goes towards energy generation. Similarly, a focus on concentrated solar power would allow the Kingdom to use waste heat from solar plants to power vital desalination plants. This trend has also benefitted greater economic diversification, as local energy infrastructure expertise is being harnessed by Saudi Arabia’s ACWA Power to gain a regional reputation for underbidding European and Asian competitors for solar projects. ACWA is already active in several projects in the UAE, Jordan and Morocco. 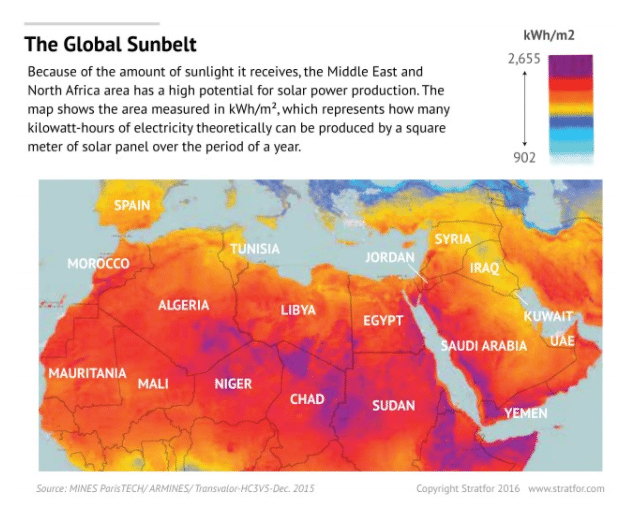 While the Saudi juggernaut is slowing turning itself around, more nimble GCC states are undertaking even more daring efforts. The UAE is positioning itself as a renewable energy technology and investment hub, and is home to the International Renewable Energy Agency. The UAE is also reviewing its energy strategy and alongside Saudi Arabia is moving to reduce gas subsidization for energy generation. “We have so many open-cycle power plants, [that] it doesn’t make sense to continue with them – they’ve very low efficiency. The reason that they are there is because gas is subsidized,” explains UAE Energy Minister Suhail al-Mazrouei.

Dubai has announced plans for 75% renewable energy by 2050, and to this end is building the Mohammed bin Rashid Solar Park, which is set to bring 1,000 MW online by 2020. The UAE is also planning $150 billion in renewable energy investment by 2050, with expected savings of $192 billion compared to LNG for the same period. This is in addition to the up to $10 billion worth of savings expected in the GCC from smart grid technology by 2020.

Oman is also investing some $2 billion in solar energy production along with Swiss and Middle Eastern partners to generate approximately 400 MW. Oman is also building the world’s largest solar steam producing plant, Miraah, next to the Amal West oilfield. The project set to begin production in 2017, will produce 1,021 MW of energy to ease oil recovery efforts, saving the equivalent of 5.6 trillion Btu of natural gas per year that would otherwise be injected into the field to recover crude oil.

Outside the GCC, other countries are also ramping up solar power investment. Chief among these is Morocco, which imports 97% of its energy. To counter this, the Moroccan government is aiming for 50% renewables by 2025 and has begun an ambitious plan to turn Morocco into a net energy exporter, by capitalizing on its proximity to Europe and ample solar power potential. The $9 billion Noor concentrated solar project has become the poster child for this effort, and is set to produce 160 MW upon completion. These efforts would in turn tie into the trans-continental, $423 billion Desertec plan for a combined grid for Europe and the MENA region. 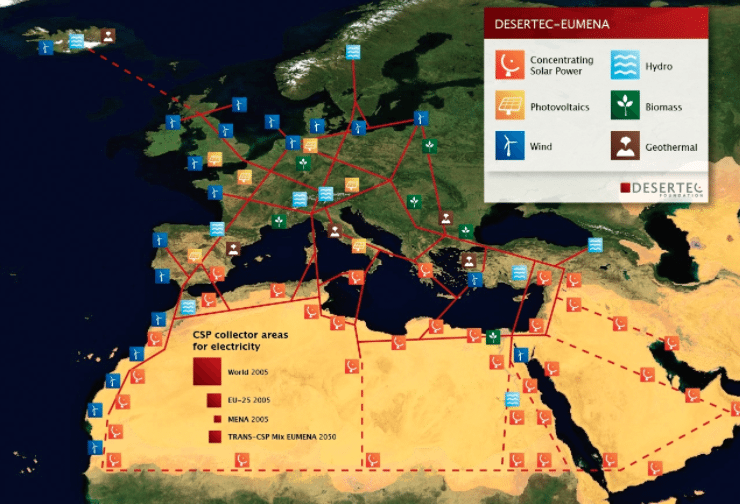 Similarly, Jordan imports 95% of its energy at a cost of 16% of GDP. Energy disruptions in the past have threatened Jordan’s stability, and while a common energy market will aid supply stability, Jordan is also focusing on increasing domestic energy production. To this end, Jordan has simplified the bidding process on renewable energy projects in order to entice investors. Moreover, the Mafraq I and II solar projects soon to begin construction, and expected to begin production in June 2018, will add 133 MW to national generating capacity. This one project alone will fulfill 2% of Jordan’s energy needs. Furthermore, Abu Dhabi’s Masdar announced plans for a 200MW solar plant in Jordan on January 20th. This announcement in turn comes less than a month after the inauguration of the 117 MW Tafila wind farm.

On April 7th, Algeria announced plans to invite bids for the construction of three solar plants with a total generating capacity of 4,000 MW, drawing interest from international investors and the African Bank of Development. Algeria has already partnered with Italy’s ENI to develop renewable energy projects. Like Morocco, Algeria has plans to act as a green energy exporter to Europe and Africa going forward. Doing so would also, like Saudi Arabia, free up more natural gas for export instead of being consumed locally for energy production.

Moving to Egypt we see a concerted effort by Cairo to stabilize its energy production, with the country aiming for 20% renewable energy by 2022. A key component of this endeavour is the $3.5 billion Aswan solar project, a network of 41 solar plants orchestrated by Egypt’s New & Renewable Energy Authority and partners. Set for completion in 2018, the network is expected to generate the equivalent of 90% of the existing Aswan dam, or 1.8 GW of solar energy.

Blessed by ample solar resources, the MENA region is well situated to continue to play a leading role in 21st century energy markets, with the added benefits of greener production, increased domestic diversification, technological innovation and greater access to markets via common electrical grid initiatives in Europe and the Arab world.