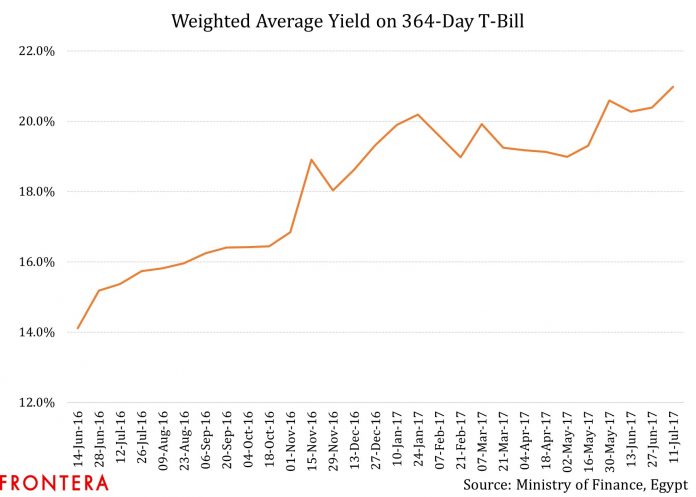 This is post 3 of 4 in the series “Egypt: Appetizing or Antagonizing?”

High yields are attractive, especially in a yield-starved world. Investors have shown affinity towards riskier, much higher yielding emerging market bonds this year, which reflects in their performance. Egypt fits right into this scenario. 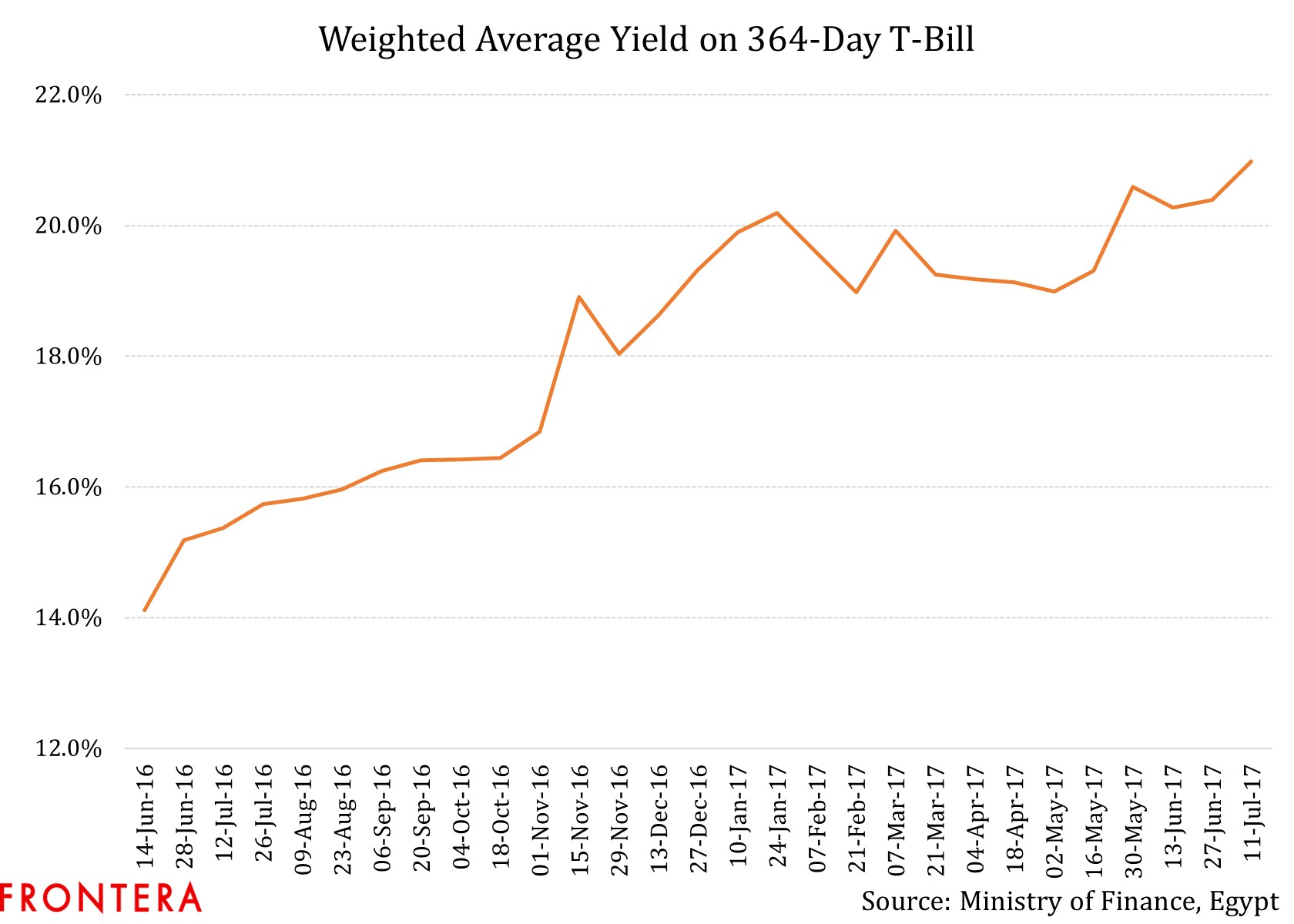 Due to aggressive rate hikes by the Central Bank of Egypt since November 2016, yields on the short-end of the yield curve have risen noticeably. This is shown in the 364-day T-Bill graph above.

On the other hand, yields on the long-end of the yield curve are influenced more by inflation expectations than by policy rate changes.

The graph below shows the weighted average yield on the 10-year Treasury bond. A new bond was issued on May 9, 2017, and though the sharp and unexpected 2% rate hike in the month did lead to a spike in its re-issuance on May 23, yields since then have declined. 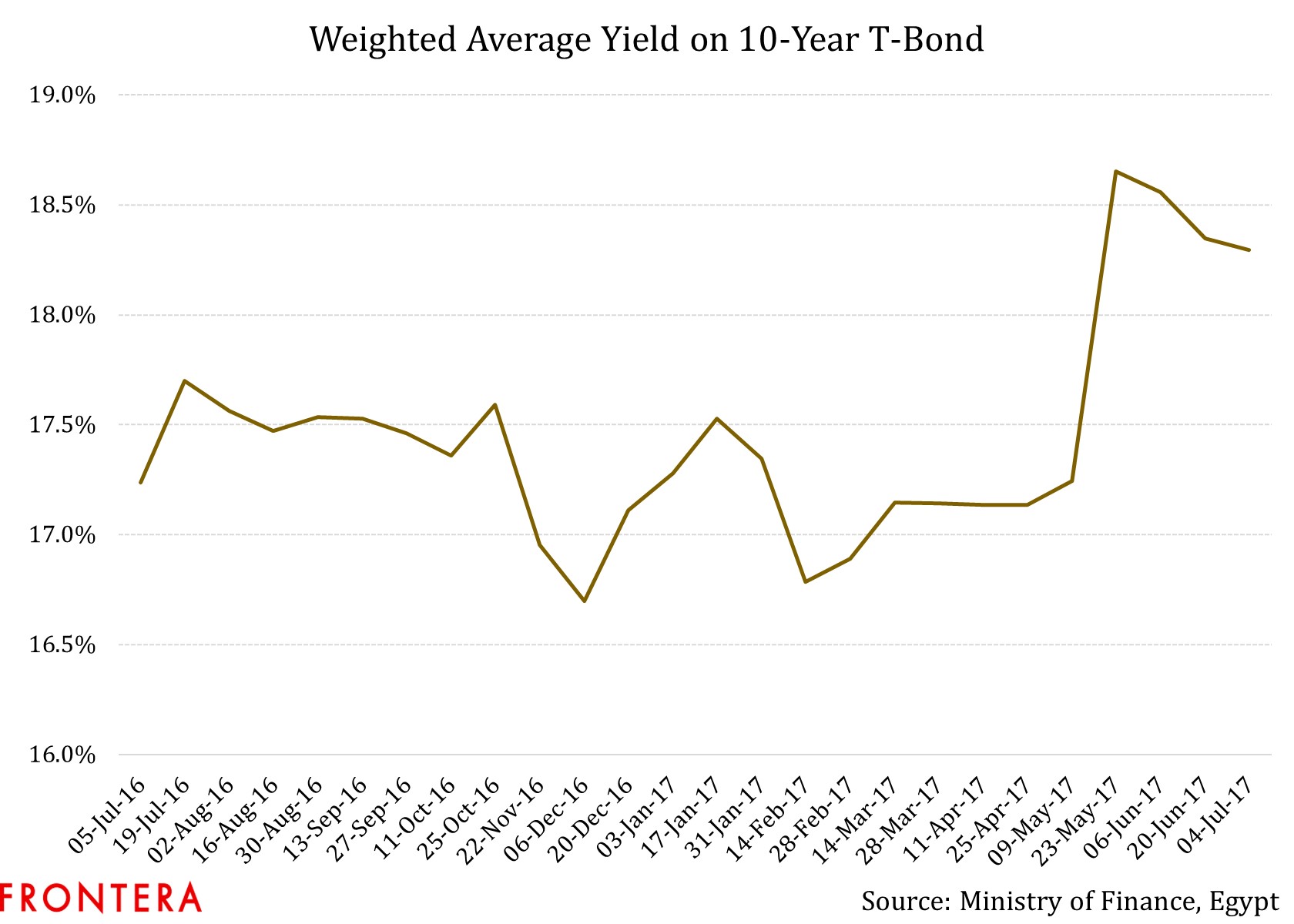 This indicates that markets are expecting inflation to fall going forward.

So how will inflation and monetary policy stance shape the future of Egyptian bonds, investor appetite and outlook?

In May, the country received over $11 billion in purchase requests for $3 billion worth of re-opening dollar notes according to an official release. The Finance Ministry deemed this response to be “the greatest ever for any emerging market when re-offering its notes in markets.” The borrowing costs for the country had declined by 0.55% from the initial offer in January.

The strong monetary policy actions in the past eight months have made short-term papers – with yields of about 20% – very attractive. But if inflation does come down as market participants are anticipating, would it not impede investor interest in these bonds?

Assuming that reform measures remain effectively in place, the answer is no.

This is so because even if yields fall, their level is expected to remain much higher than a lot of its emerging market peers, which would continue to make them attractive. This situation can reverse though, if the general sentiment towards emerging markets bonds sours in light of tighter monetary policy in developed nations.

Further, though high double digit yields in short-tenures seem attractive, their level coming down would be preferable as it would indicate improving economic outlook. Higher yields are also a function of perceived riskiness, thus a degree of decline would be an indirect vote for reduced risk associated with the country.

Once reforms start having their desired impact on the economy, the country could be in line for a sovereign credit rating upgrade, which would further enhance the appeal of Egyptian bonds. The country is presently rated B3 by Moody’s – six notches below investment-grade.

The risks to this outlook include inflation declining slower-than-expected if the impact of rate hikes remain diluted (as discussed in the previous article). Any public backlash to reforms as they put increased pressure on the already impoverished masses, could result in slowing down of the process and also negatively impact the outlook on Egyptian bonds.

In the next article, let’s take a look at how Egyptian equities have fared so far and how developments in the country could affect them going forward.

This is post 3 of 4 in the series “Egypt: Appetizing or Antagonizing?”