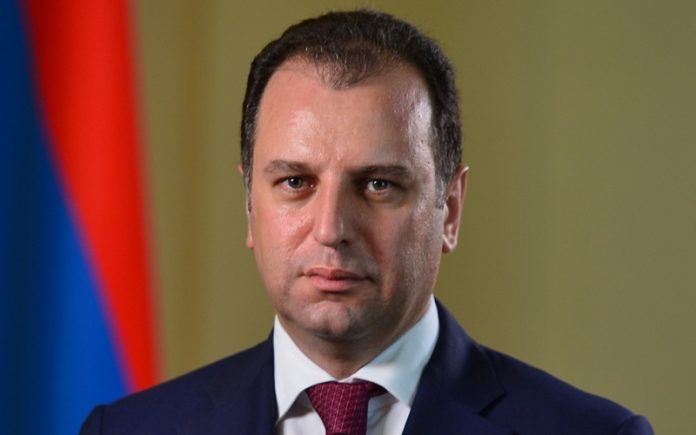 On 3 October 2016, the Armenian President, Serzh Sargsyan, implemented a number of changes in a cabinet reshuffle, which saw the appointment of a new defense minister, Vigen Sargsyan. Discussions about his inauguration have revolved around his background and the political climate within which the appointment was made. Can a fresh face at the helm of the Armenian government lead to new opportunities for the country?

Who is the new defense minister?

Vigen Sargsyan is a relatively young minister at 41-years old, and was the former the chief of staff to President Serzh Sargsyan before his appointment (note: there is no familial relation between the two). Sargsyan graduated from St Petersburg University, specializing in staff management (albeit through distance learning), before completing a degree in international relations at Yerevan State University. His educational experience in America has attracted a fair amount of attention, as he received a master’s degree from Tufts University’s Fletcher School of Law and Diplomacy, specializing in International Law and International Security.

His exposure to both the Russian/post-Soviet perspective and the American point of view with regards to international relations is likely to have an effect on his approach to Armenia’s foreign relations.

A further significant point to make is that Vigen Sargsyan has been appointed to the position of defense minister as a civilian and not as an individual with a high rank and lengthy experience in the army. He is also the first defense minister not to have direct experience with the Nagorno-Karabagh war. The importance of this point cannot be overstated.

Vigen Sargsyan’s appointment as defense minister comes amid a wide-ranging political reshuffle in the Armenian government. The most prominent change was the nomination of the new Prime Minister, Karen Karapetyan, who used to be the chief executive of the Armenian subsidiary of the Russian gas giant, GAZPROM. Karen Karapetyan has been criticized by some of being pro-Russian, due to his business links with the country, and part of the post-Soviet oligarchic system. He has already received the Russian Ambassador for talks on trade and economic cooperation between both countries.

These changes have come following the hostage-taking crisis and protests that occurred in Armenia in July. Police and military brutality has been commonplace in Armenia during such incidents. It is possible that placing a civilian as the head of the Ministry of Defense will pacify some of the anger that has arisen due to police violence.

Although domestic political conditions have an effect on the appointment of any minister, the appointment of a defense minister is largely connected to the geopolitical environment since their function will be to protect the interests and security of the country in the military domain. This is especially the case for a country like Armenia since it finds itself involved in a drawn out “frozen conflict”, the Nagorno-Karabagh conflict, with its neighbor, Azerbaijan.

As mentioned before, Vigen Sargsyan has no direct experience of the Nagorno-Karabagh conflict, unlike the former defense ministers of Armenia. He was a mere 13-year old teenager when the conflict began. This may lead one to believe that the Armenian government will take a fresh stance on the conflict. Nevertheless, he has noted, “the Armenian side will be forced to continue to devote a significant amount of funds to military expenditure”. So far he has expressed a steadfast stance on the Nagorno-Karabagh conflict.

In recent years, Azerbaijan has been purchasing arms in vast quantities from Russia, Turkey and Israel, while Armenia has been sold arms in significant amounts only from Russia. Vigen Sargsyan’s educational and professional experience in both Russian and Western working cultures may have played a substantive role in the thinking of the Armenian President when appointing his new defense minister. Russia has continued to play the role of intermediary in the Nagorno-Karabagh conflict since its inception. It has the power to tilt the balance towards either Armenia or Azerbaijan. Vigen Sargsyan may use his expertise to acquire military equipment from other countries, but the focus will surely be on winning the favor of Russia, especially considering the inauguration of Karen Karapetyan as Prime Minister.

There have been claims that Vigen Sargsyan’s lack of experience on the battlefield and in the Nagorno-Karabakh conflict in general renders him an unsuitable candidate for the job of defense minister. The President, Serzh Sargsyan, has refuted these criticisms by noting that the role of defense minister is far more to do with political-military diplomacy, and the management of personnel and military equipment (both domestic and foreign), than with the everyday activities of the army. His education in staff management and diplomacy is thus a justification for his worthiness of the ministerial role.

If Vigen Sargsyan is given the freedom to direct the foreign relations of the military, then he will have a choice to make between entrenching the partnership with Russia and reaching out to find new partners in the global arena. The first option can be seen from the perspective of the continuation of dependence on, and the ceding of Armenia’s geopolitical clout to, Russia. The second option may give Armenia more freedom to form alliances with other countries on a more equal footing; however, that may leave the country in a precarious situation where its security is not guaranteed by a greater power.

With the appointment of an allegedly pro-Russian Prime Minister and the lack of possibility of a change of regime in the near future, especially after the constitutional referendum of late 2015, it seems that Vigen Sargsyan may have little choice but to pursue the first option. Nevertheless, unprecedented events in Armenia may occur, as was seen in July, and the oscillation between peace and war in the Nagorno-Karabakh conflict may yet dictate the course that the new defense minister will take.