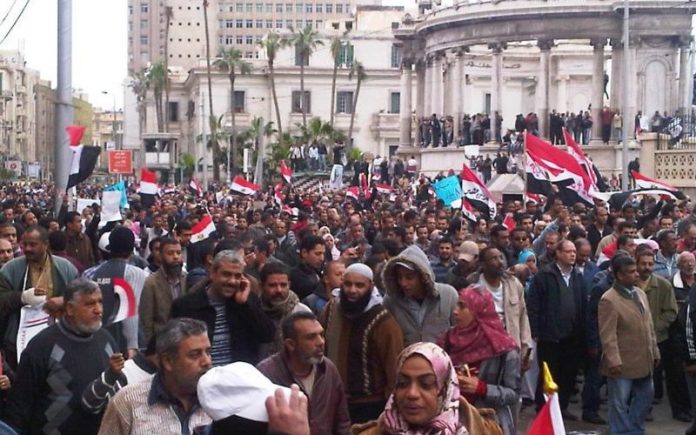 With major increases in potential instability and unrest in Egypt, and presidential elections due on 26-28 March, conditions are ripe for another wave of protest.

It’s not uncommon to hear Egyptians saying that the revolution failed – that it was hijacked by opportunists, while the true revolutionaries were left hopeless, without a unified leadership. The political transition after the June 30 Revolution has been unsuccessful in giving the people the one thing they have demanded since 2011: a voice. A successful democratic transition demands that the people rule the government and the people control the public sphere, not vice-versa.

There has been no effective transformation or distribution of power among the state’s ruling institutions in Egypt, and therefore no tangible break from the ingrained authoritarianism of the past. The military continues to control the state. An absence of effective checks and balances has facilitated a clampdown on free speech and civil society, all under the guise of “national security.” The result is a society in quiet revolt against the same kind of repression that led to the 2011 revolution and the wider Arab Spring – and survey data supports this view.

The context: closing public spaces and obstructing freedom of speech

Islamist militant attacks against security forces and civilians surged in the Sinai Peninsula immediately following the removal of Muslim Brotherhood (MB) elements from government, and pro-Morsi demonstrators faced the heavy hand of the armed forces. Associations were drawn between certain elements of the MB and the militant groups in the Sinai, and the MB quickly became synonymous with terrorism in government discourse.

When the opposition is labeled a threat to national security, the road ahead is very slippery. The oppressive measures that have resulted from this designation are increasingly used to suppress those who challenge the government. Thousands of opposition figures now allegedly sit in prison. A report released in September 2016 asserts that Egypt’s prisons hold around 60,000 political prisoners – 57% of the incarcerated population.

Suppression of the opposition has taken over many facets of Egyptian society. Outspoken newspapers have been outlawed while draconian anti-protest and NGO laws have crippled the public sphere. All genuine opposition candidates to current President Abdel Fatteh Al-Sisi have withdrawn from the forthcoming presidential election, and their supporters have been unable to speak out, for fear of reprisals.

Crushing opposition and disallowing genuine political dissent in the name of stability, can cause just the opposite. Partly in response to Sisi’s authoritarian rule, the insurgency in northern Sinai is unrelenting and Egypt has become an important battleground in the struggle against ISIS and its affiliates. In addition, the repressive measures threaten to provoke public discontent.

The data: rapid rise in discontent and mistrust of institutions

Data collected by Dalia Research between November 2017 and January 2018 as part of the Risk Pulse project – a new way of measuring political instability risks – shows a stark trend. Egyptians’ trust in their institutions is falling rapidly: trust in the police went from 65% in November to 62% in December, and 56% in January; similarly, trust in the courts declined from 64%, to 57%, and hit a low of 54% in January.

Egyptians are also reporting a perceived increase in corruption over the past 12 months, from 47% in November to 55% in January, and they are feeling more unhappy about it: 57% said they were angry about corruption levels, up from 50% in November.

Perhaps most importantly, the largest changes in the survey data showed a 13% rise in the proportion of the population inclined to take part in protests, from 11% in December to 24% in January. Egyptians’ perception of the level of instability in the country likewise jumped by 12%: while 29% said the situation looked unstable in November, this rose to 35% in December, and 41% in January. These are much bigger changes than are currently being observed in other countries monitored by Risk Pulse.

The outlook: implications for political stability in Egypt

Sisi recently gave a firm warning to the opposition: during the inauguration ceremony of the Zohr gas field on 31 January, he gave an impromptu speech in which he stated that he is “not a man of politics” when it comes to “anyone trying to manipulate the state’s stability.” Coming from an ex-military man, the promise that he would do everything he can – including give his own life – to preserve the country’s stability and security sounded more like a threat.

In the short term, two factors – alongside Sisi’s tightening control of state institutions such as the military and intelligence services – may help Sisi preserve political stability for the time being.

Firstly, the police and intelligence services have become even more diligent at sniffing out dissent. The large number of political prisoners who sit in prison, the lack of press freedom and the tightening of the public sphere exemplify their success in helping to suppress opposition.

Secondly, as a result of the deterioration of personal freedoms and the lack of political pluralism, and in view of calls to boycott the elections, Sisi is on track to win the presidential mandate again in March. Although the Dalia data suggest that protests are increasingly likely to follow such a result, it is not yet clear whether they will be large and durable enough to lead to regime change. Street protests have effectively been banned since 2013 and when they do occur, tear gas, rubber bullets and arbitrary arrests are used in response.

Medium to long-term political stability is less certain, however, given the indications that Sisi’s tactics are reducing public trust in the state. In particular, should he attempt to amend the constitution to extend his tenure, either extending the term limit to 6 years or removing term limits altogether (like former presidents Sadat and Mubarak) – he would likely face combined resistance from the parliament and the population.

Unless Sisi makes allowances for political plurality during his second term in office, the risk of political instability will continue to increase. His failure to introduce effective checks and balances and uphold the right to personal freedoms will see his position come under intense pressure in the long run from politicians and the public, who still cherish the desire for the same freedoms they called for in 2011.

Joseph Colonna is a Cairo-based political analyst. He is also a research fellow with Freedom Forward. As originally appears https://globalriskinsights.com/2018/02/unrest-risks-egypt-revolution/