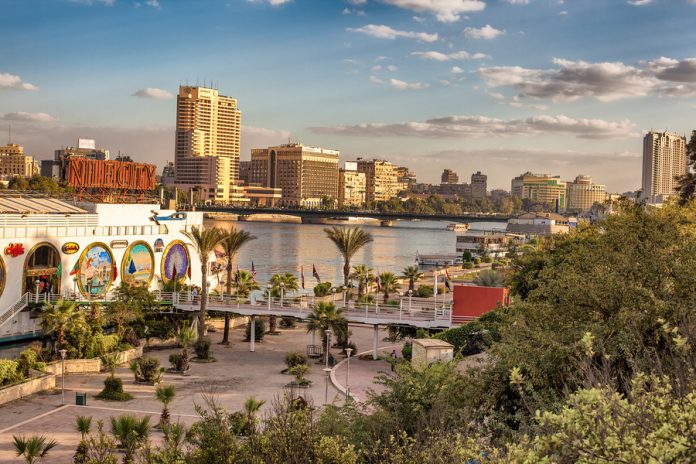 Egypt’s government plans to divest their stakes through IPOs

Egyptian (EGPT) government is mulling plans to divest stakes in select state-run enterprises as part of broader efforts to revive its battered economy. Bloomberg reports mention that discussions are underway between Egyptian authorities as well as local and international investment banks to advise the government on the sale of stakes in government-owned companies.

Investment and International Cooperation Minister of Egypt, Sahar Nasr said to Bloomberg in an interview that these stake sales would “broaden the ownership” of state companies among Egyptians, bolster local capital markets and help the government raise revenue”. The Egyptian government has hired HSBC and EFG-Hermes as advisors on the IPO of state-owned Egyptian bank Banque du Caire. Inflows have surged since Egypt’s central bank free floated its currency last year. The Egyptian benchmark EGX30 index is up 65% in the past one year and 4.7% YTD. Egyptian ETFs and ADRs have also gained since the currency devaluation. 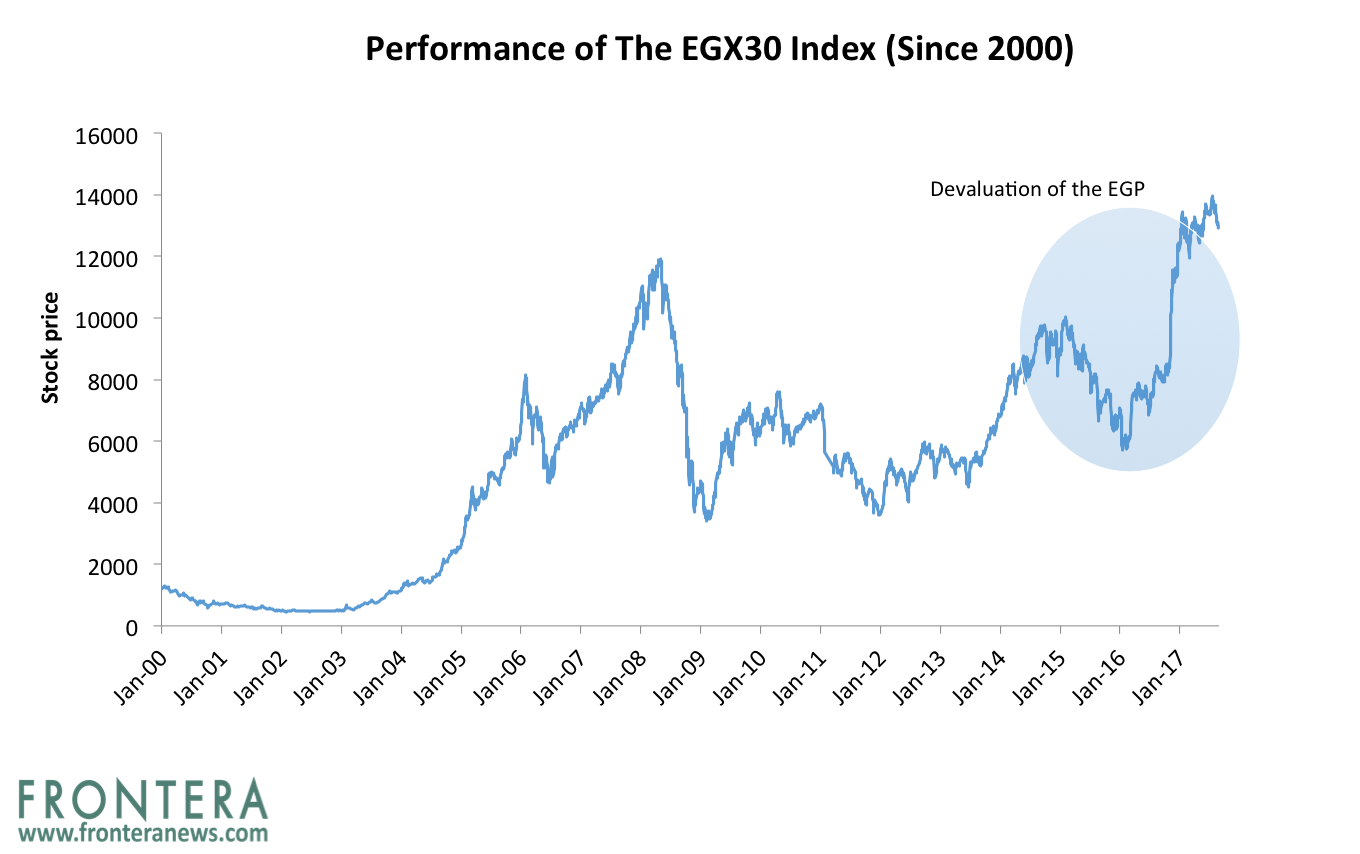 The last time state-owned companies were listed on the exchange was in 2005 when shares were floated in Telecom Egypt and oil companies Sidi Kerir Petrochemicals and AMOC.

High borrowing costs make IPOs attractive for companies as they search new avenues for their financing requirements. Further, a rising equity market also lures these companies to consider public issues of their shares as they can generate attractive valuations on their shares.

Mohsen Adel, Vice Chairman of the Egyptian bourse, mentioned that the exchange is planning to attract further investments over the next few years by adding new instruments and moving to a fully digitized quote system. Currently, there are 270 stocks listed on Egypt’s stock markets and 500,000 investors are registered to trade. Of these, only 80,000 to 100,000 investors are currently trading actively. “I expect the listing of three to five new companies in the stock market before the end of this year, between medium and large-sized ones,” Adel said recently, without giving further details. “The procedures for listing one of the state petroleum companies, ENPPI, are being completed within days,” he added.

Since November 2016, Egypt’s central bank has raised interest rates by nearly 7 percentage points as part of its efforts to counter high inflation. However, this has hampered the financing capability of businesses in the country and has made debt unattractive. As such, companies are turning to the equity markets to raise funds for their projects. “The high interest rates currently could enable us to attract new companies because financing opportunities on the bourse cost a lot less,” said Adel. 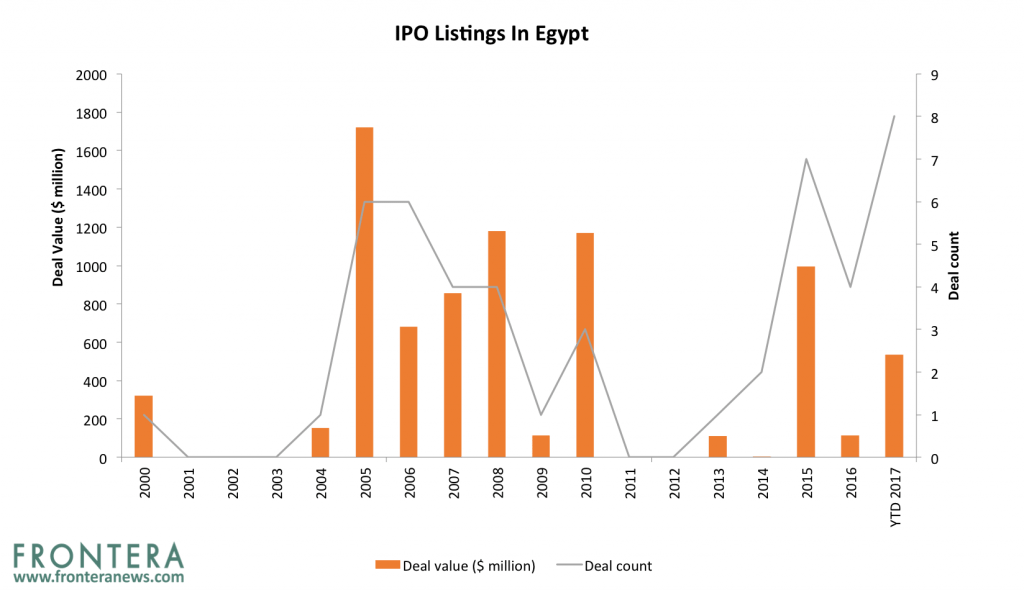 Since 2000, only 42 share issues (including rights issues, FPOs, and IPOs) have been announced in Egypt, for an aggregate deal value of $7.9 billion. Of these, 35% of them were by financial firms, while 25% were by the communications sector. Consumer non-cyclicals and industrial constituted 14% and 11% of the IPOs in Egypt over the past 5 years. 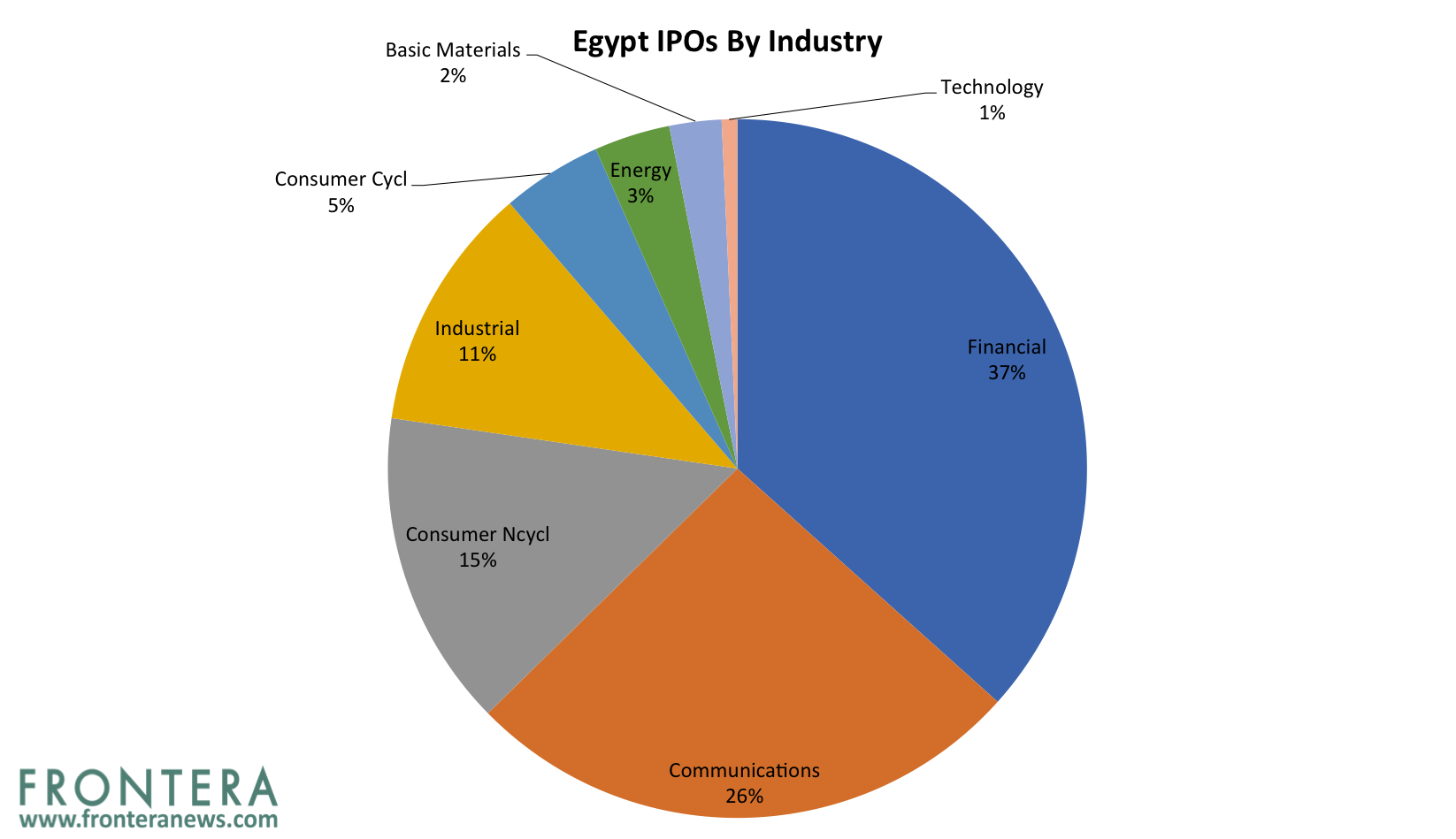 Egypt’s stock markets have seen only 8 IPOs in 2017 so far with an aggregate deal value of $535 million.

The largest Egyptian IPOs by deal size since 2004 have been Telecom Egypt, Citadel Capital, Talaat Moustafa Group, and Emaar Misr for Development SAE. The IPOs of these companies have generated investments of $890 million, $800.6 million, $605 million, $592 million, $322 million and $298 million respectively. 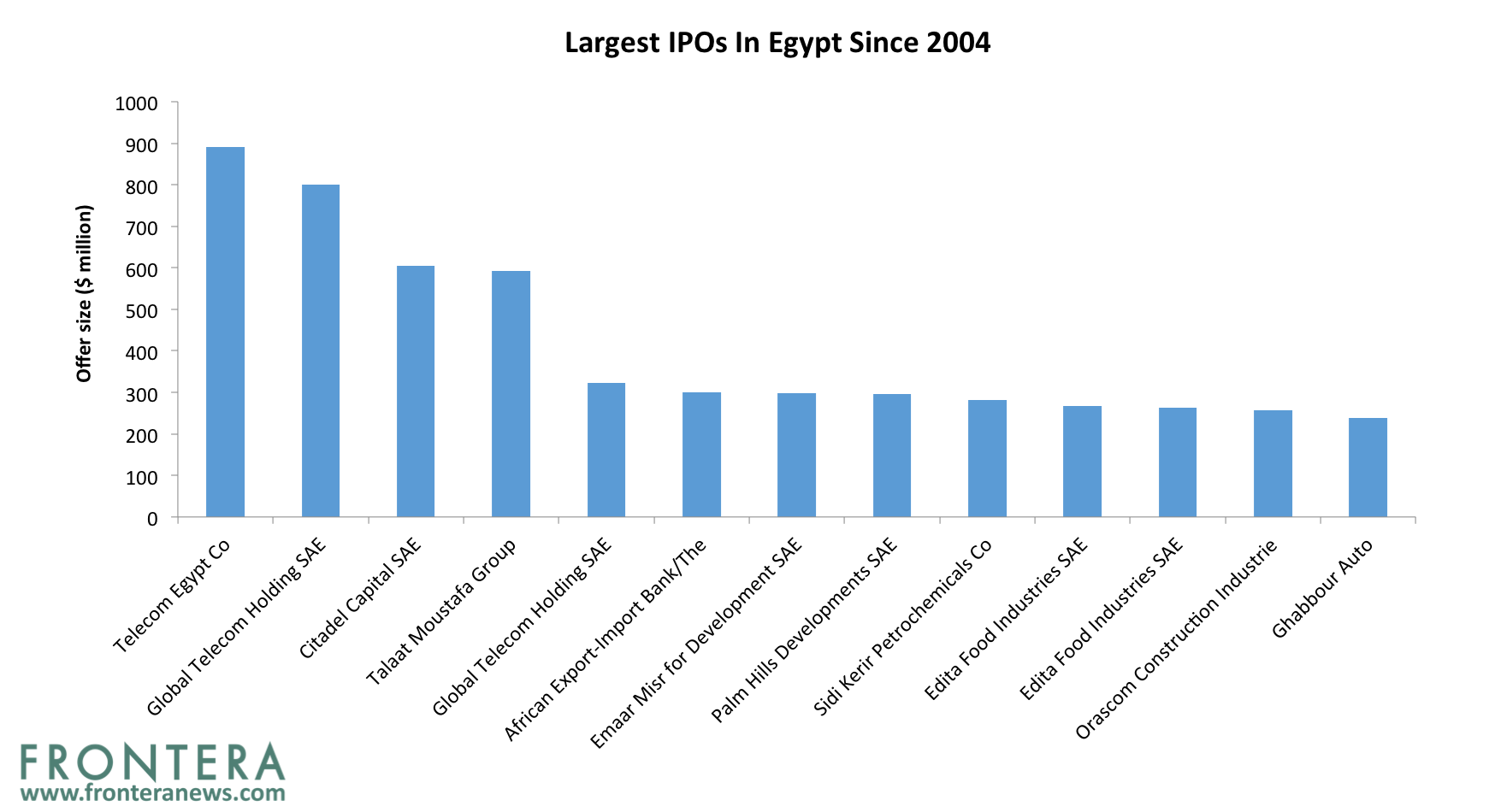 Shares of these companies have lost 20%, 79%, 30%, and 34% since their respective public issues. Apart from these, Palm Hills Developments listed its shares on the London Stock Exchange. Since its public listing in May 2008, shares of the company have plunged nearly 93%. 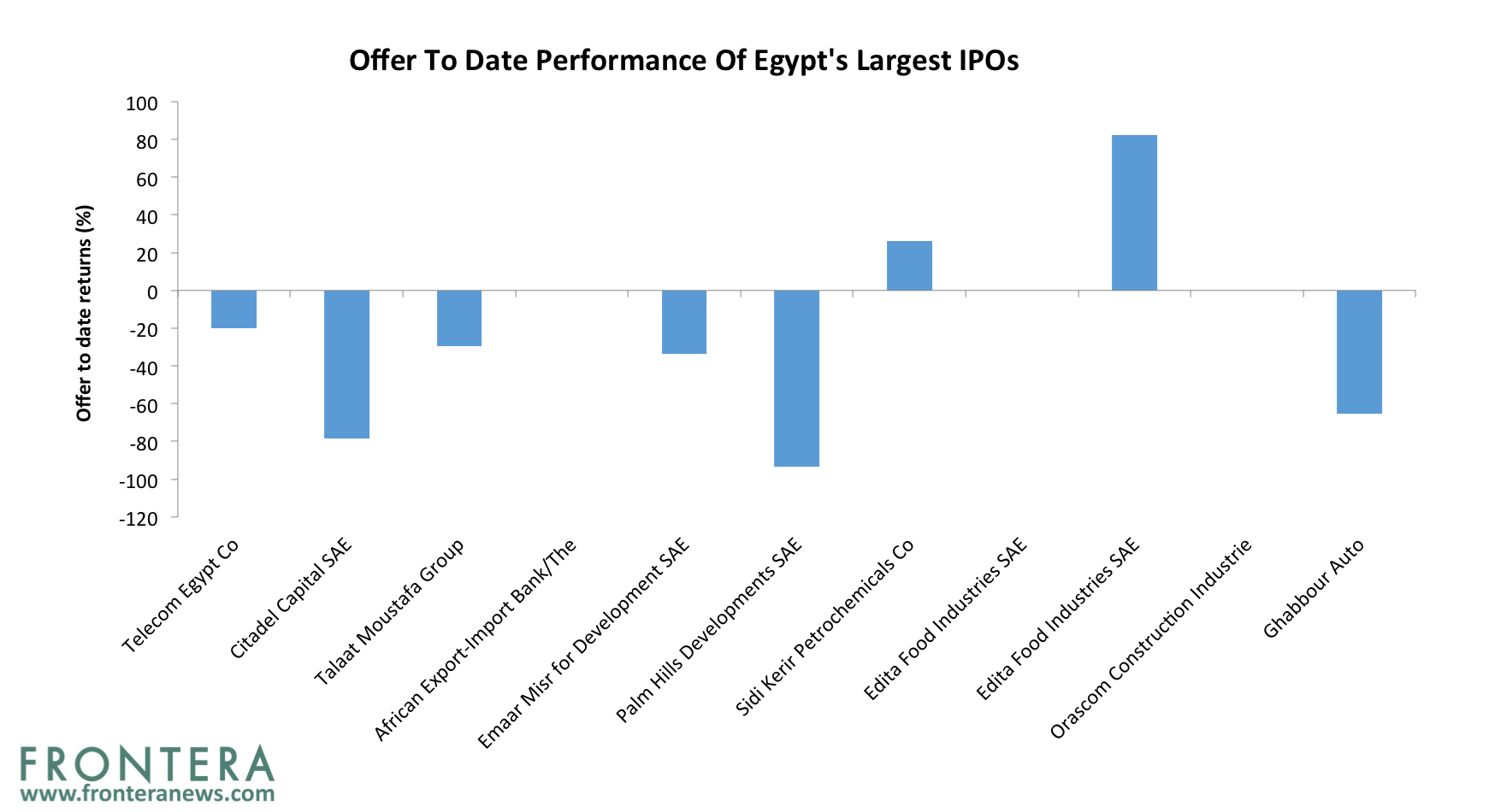 Telecom Egypt raised nearly $892 million in an IPO in 2005. Shares of the company were listed on the London and Egyptian Stock Exchanges, making it the largest international IPO from the Middle East and North Africa during that calendar year.

Telecom Egypt offered 340 million shares through the IPO, of which half were reserved for institutional investors. Demand for the IPO hit nearly 1.45 billion shares, almost 4.2x the number of shares on offer. 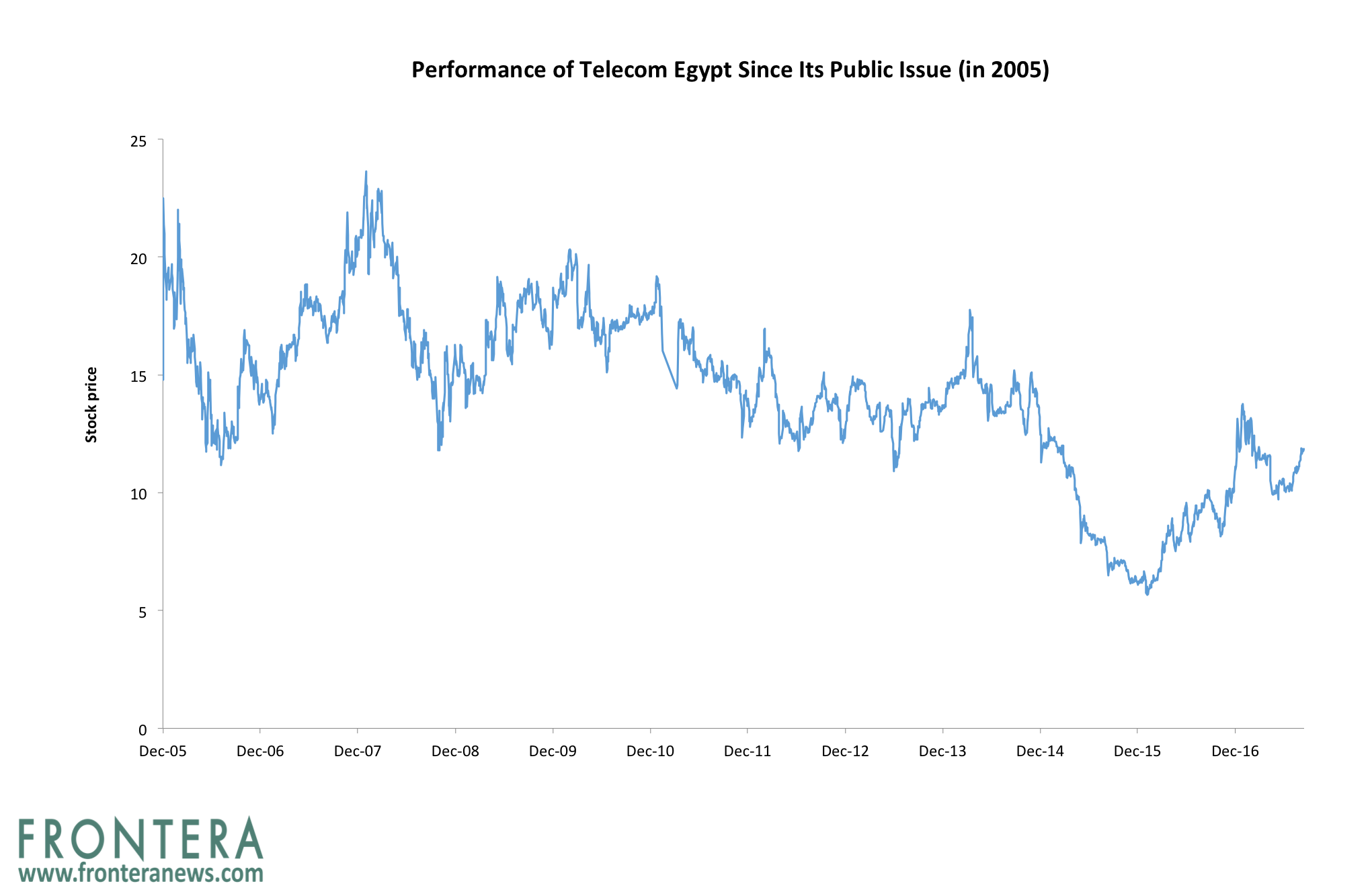 Telecom Egypt trades with the stock ticker ETEL.CA on the Egyptian stock exchange and TEEG.LI on the London Stock Exchange. Shares of the company have dropped 19% since its public listing on the Cairo Stock Exchange in 2005.

Citadel Capital, now known as Qalaa holdings is the leading private equity firm in the Middle East and Africa. The company listed its shares on the Egyptian Stock Exchange in 2009. Citadel’s IPO generated $605 million as per Bloomberg data, making it the second largest Egyptian IPO in the last 10 years. 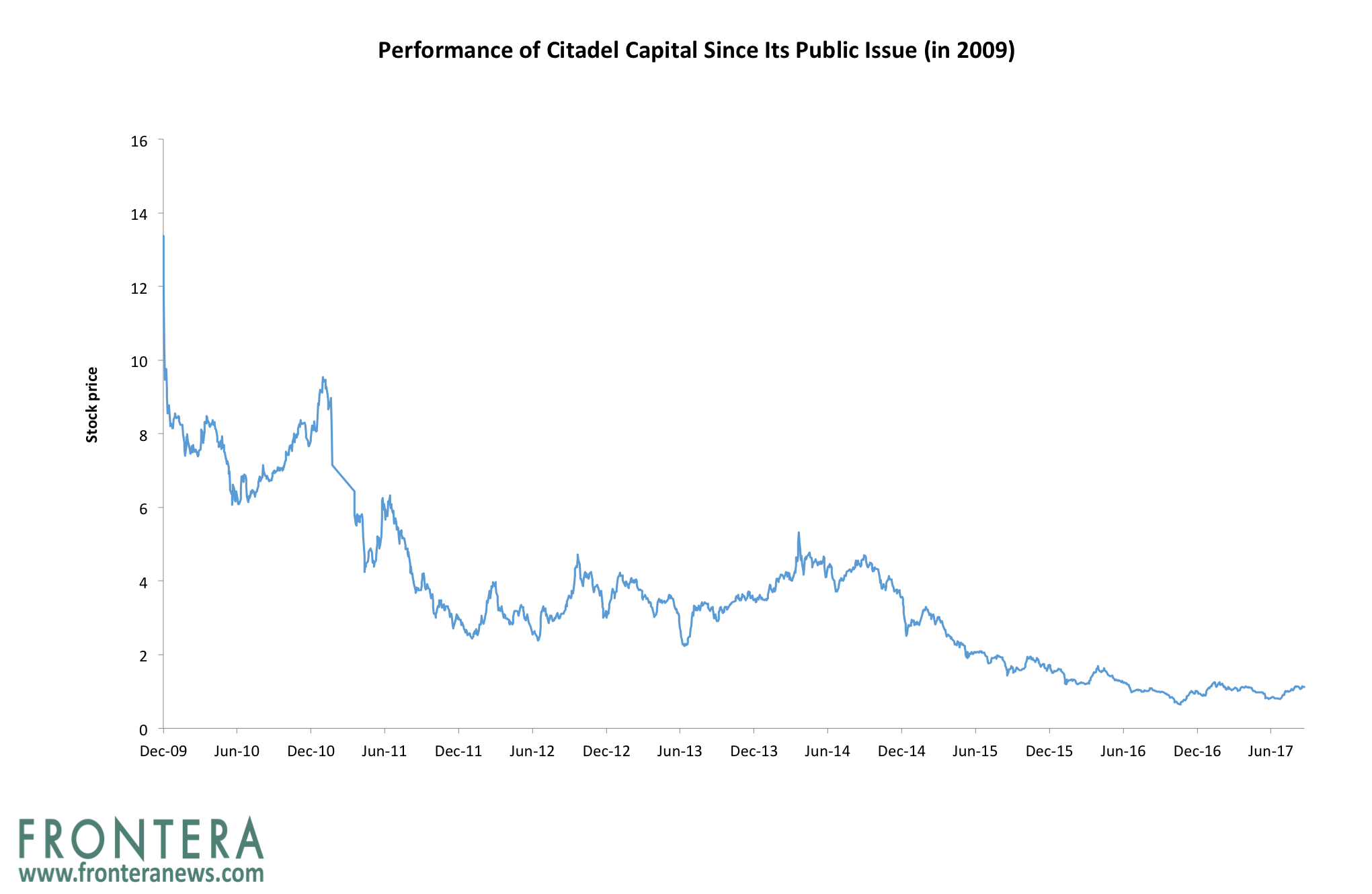 The company offered 660 million shares at EGP 5 per share. Citadel Capital Chairman and Founder Ahmed Heikal said about the IPO, “Listing on the EGX will make it easier for Citadel Capital to raise its own capital in the future, thereby enhancing our ability to be significant principal investors in our own transactions. This is a key component of our business model that ensures Citadel Capital’s interests are fully aligned with the interests of our limited partners in each and every one our investments.”

“Instead of relying on leverage to generate returns, Citadel Capital has always focused on deploying equity capital and smart levels of debt to create value for shareholders and limited partners alike through the patient building of Platform Companies with regional scope, allowing us to generate superior returns at exit,” says Citadel Capital Managing Director and Co-Founder Hisham El-Khazindar.

Citadel Capital trades with the stock ticker CCAP.CA on the Egyptian stock exchange and has plunged 78% since its public listing in June 2009.

Talaat Moustafa Group, the largest Egyptian real estate developer raised $592 million in an IPO in November 2007. The company offered 330 million shares to institutional investors at EGP 11.6 per share and 65 million shares to retail investors at EGP 11 per share. The company’s private placement to institutional investors was 17 times oversubscribed. Overall, the company received applications for $5.4 billion (EGP 29.6 billion) worth of shares, and the IPO was 41.4x oversubscribed. Proceeds of the IPO were used to finance current and future projects in Egypt and the region. 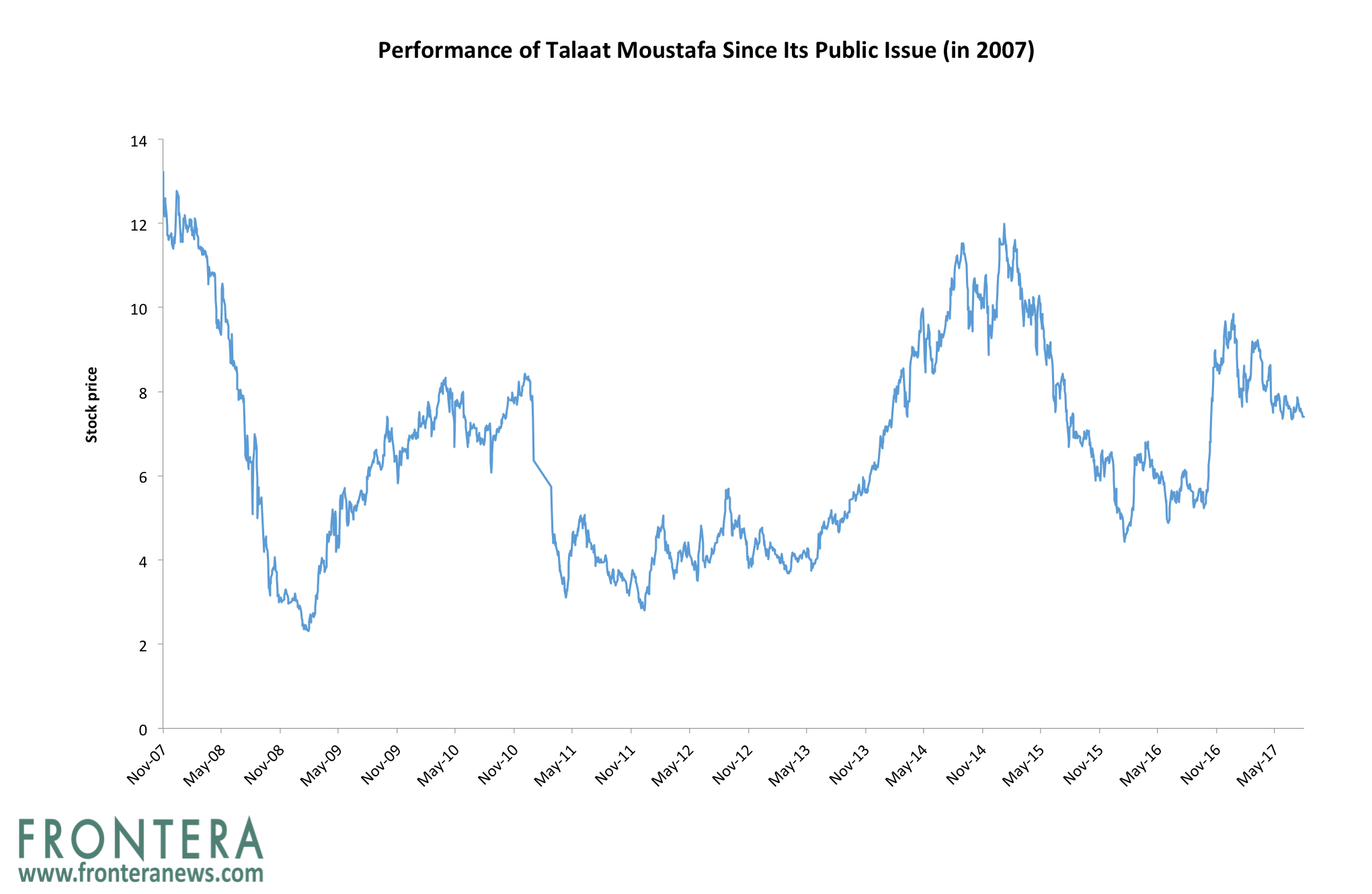 Mohamed Ebeid, head of western institutional sales at EFG-Hermes said, “The company represents the macroeconomic story in Egypt, which is the rise of the middle class. There are not many real estate companies listed and there is a lot of interest in the real estate market,” EFG-Hermes, acted as joint coordinators and bookrunners of the issue with HSBC. He added that TMG was the biggest real estate developer in Egypt.

Talaat Moustafa trades with the stock ticker TMGH.CA on the Egyptian stock exchange and has fallen 30% since its public listing in November 2007.

Emaar Misr for Development is the Egyptian Unit of UAE’s largest real estate developer Emaar Properties. The company offered a 13% stake (or 600 million shares) in Emaar Misr at EGP 3.8 per share. The IPO was 11 times over subscribed and traded nearly 4% higher than its issue price on its first day of trade. 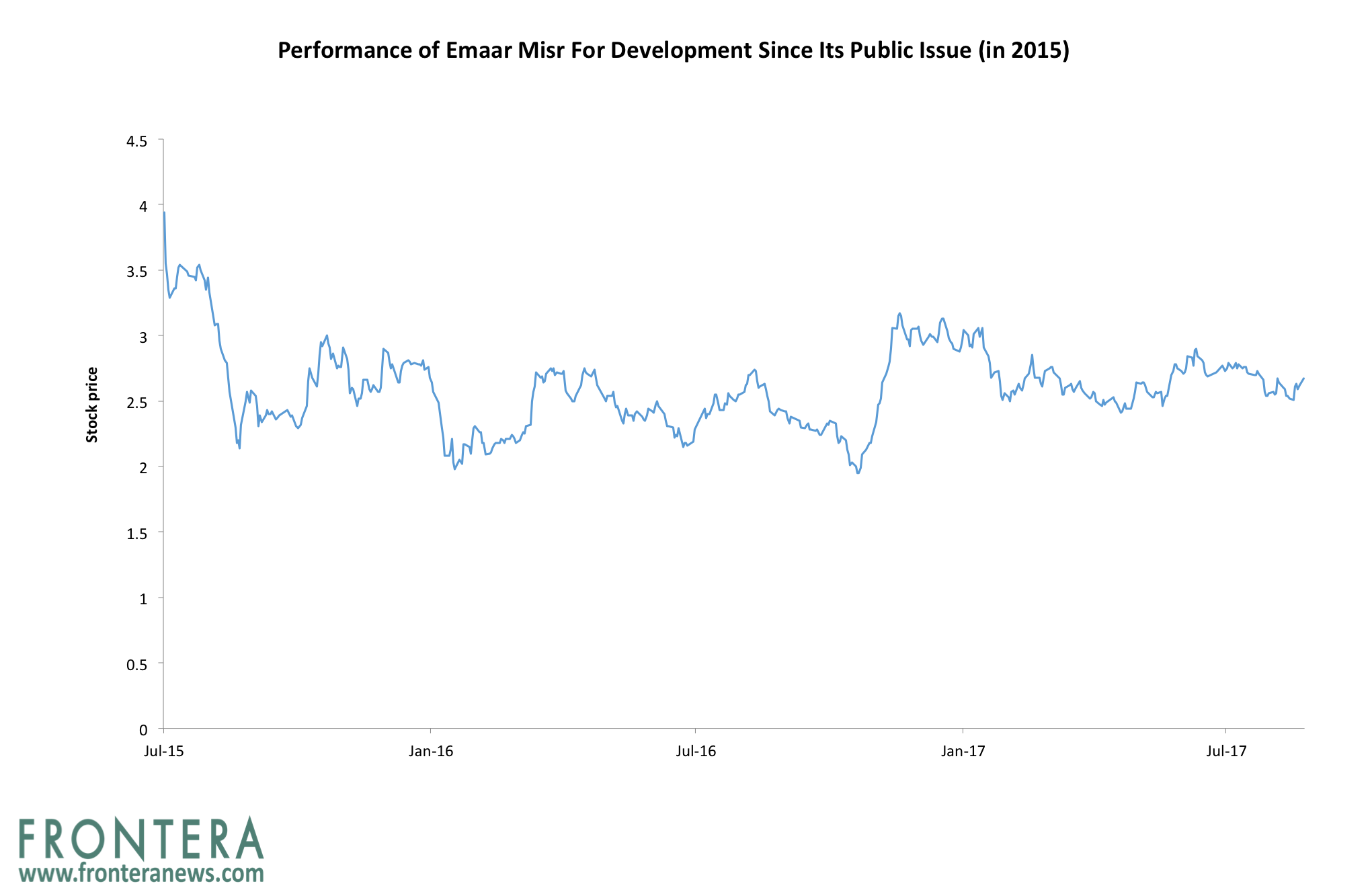 The company used proceeds from the IPO to buy land. It offered 510 million shares to international institutional investors, and 90 million shares to retail investors based in Egypt. The Egyptian investment bank EFG Hermes and JP Morgan were the joint bookrunners for the issue.

Emaar Misr for Development trades with the stock ticker EMFD.CA on the Egyptian stock exchange and has declined by 34% since its public listing in 2015.