Hong Kong-based fund management company Asia Frontier Capital (AFC) has been actively tracking Iraqi equities since June 2015 when they launched the AFC Iraq Fund. As of January 2017, the fund is overweight the financial sector which commands a good 58.1% portfolio allocation. Consumer staples stand second with a 23.3% weighting.

The fact that AFC’s Iraq fund is overweight to the financial sector is a direct derivative of the nature of the market, said Thomas Hugger, chief executive officer and founder of AFC. “There are over 80 companies listed on the stock exchange in Iraq, with the financial sector accounting for almost a third of the market cap but over three-quarters of trading volumes; our positions include banks, insurance companies but none of the many listed money exchange bureaus,” Hugger told Frontera in a recent interview.

Does the oil rebound make investing in Iraq, less risky?

Iraq is highly dependent on oil with oil accounting for over 90% of government revenues and in turn the government is the biggest player in the economy. The double whammy of the collapse in oil prices in the last two years and the high military spending due to the demands of the war against ISIS almost devastated the economy. The near doubling of oil prices goes a long way in liquefying the economy and ultimately the markets. There is likely more room for growth with the markets predicting oil (OIL) (USO) (XLE) prices to recover through 2017. Iraqi Kurdistan has about five companies listed outside Iraq. AFC has invested in two such companies, one listed in Norway (DNO:Oslo) as mentioned previously, and the other, Genel Energy Plc, listed in the UK (GENL.L).

Hugger suggested that with the oil situation improving, energy stocks from the region will be of particular interest. However, it still remains “very risky” due to the uncertain political situation between the federal government of Iraq and the Regional Government of Kurdistan (KRG), plus, the strained finances of the KRG affect its ability to pay these oil companies for the oil they export. 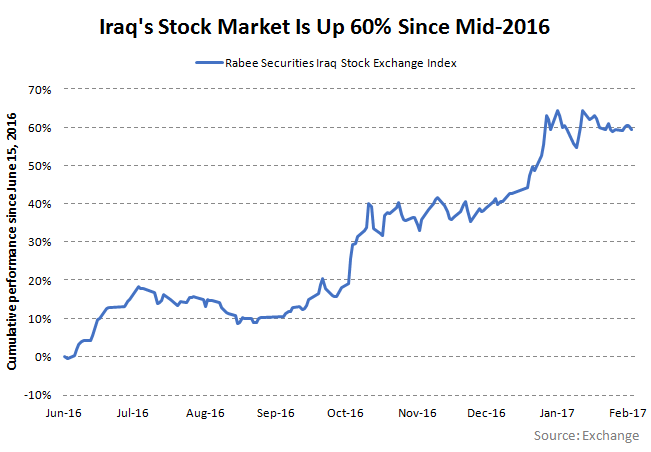 Are we seeing the start of a bull market in Iraq?

In his January newsletter to investors, Hugger affirmed “the start of a bull market” in Iraq. The frontier (FRN) (FM) market has come a long way from the economic plunge that 8 years of war (2003-2011) left it in. The Rabee Securities Iraq Stock Exchange is up 60% since mid-2016 (see chart above). We now see investment rising in the economy, which is sparking lending as well, providing impetus for financial stocks to outperform, according to Hugger.