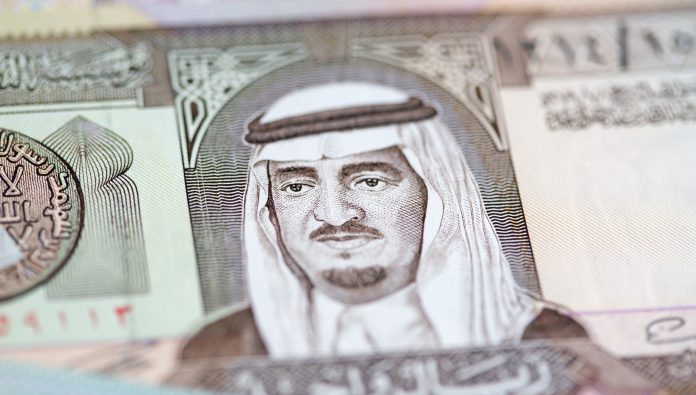 Having consolidated unparalleled political power, Saudi Arabia’s reformers are likely to next target the country’s vastly overvalued currency, the Riyal, to jump-start the sagging economy. A major currency devaluation is inevitable. By contrast, the Russian ruble, also a major petro currency, has undergone a 100% depreciation. A probable 30%+ devaluation of the Riyal will create a large $120bn balance sheet asset-liability mismatch, requiring the Saudi central bank to liquidate over $100bn in foreign investments to fix its balance sheet. Such a major move by the central bank will see several major global asset managers, who manage Saudi investments abroad, shrink their overall assets-under-management (AUM), cut staff and exit many large equity and global corporate fixed income positions to return cash to the kingdom. In short Saudi’s pare-back of its investment portfolio will hit global capital market assets prices.

Saudi Arabia holds over $130bn in US treasuries, and over $300bn in global investment grade fixed income assets and blue chip equities. A Saudi devaluation will have major negative market reverberations. And yet without a devaluation even the planned 2018 Saudi Aramco IPO may stall. 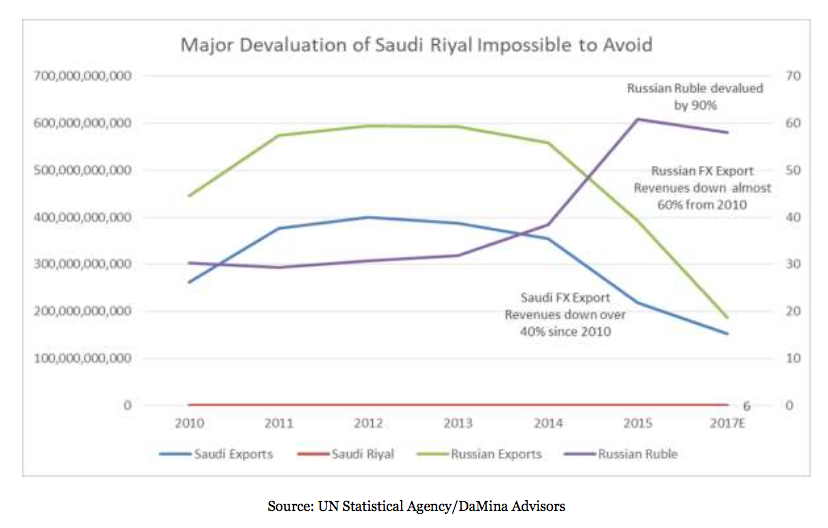 Beyond the devaluation, the next 45 days will determine whether Saudi Arabia’s dramatic political pivot to escape its stable past and launch forth towards an unpredictable future will succeed. The ongoing reforms seek to combine features of China’s Cultural Revolution, Europe’s Protestant Reformation, and the USSR’s Perestroika/Glasnost, into a single ‘big bang’/’shock therapy’ program to pole vault the 85- year old nation, the home of Islam, into the 21st century. If however the history of revolutions is any guide, the ongoing valiant efforts are unlikely to immediately succeed. The centrifugal forces of deep religious inertia, a conservative nobility, turbulent regional geopolitics, and miscalculations by an inexperienced leader are likely to prevail over the youthful optimism and sheer force of will of the young westernized reformers. A reversal of fortunes for the reformers is inevitable.

Ultimately, Saudi Arabia’s turbulent reforms risks breaking the country apart, into waring East-West Ottoman-era enclaves, and may trigger a new Middle East geopolitical map, leaving Russia as the de- facto leader of OPEC+, as Saudi oil production enters a multi decade decline amidst protracted instability in the kingdom. With the royal family splintered, and the support for Wahabbi Islam withdrawn, in favor of modernization, the foundations of the Saudi state are imperiled. 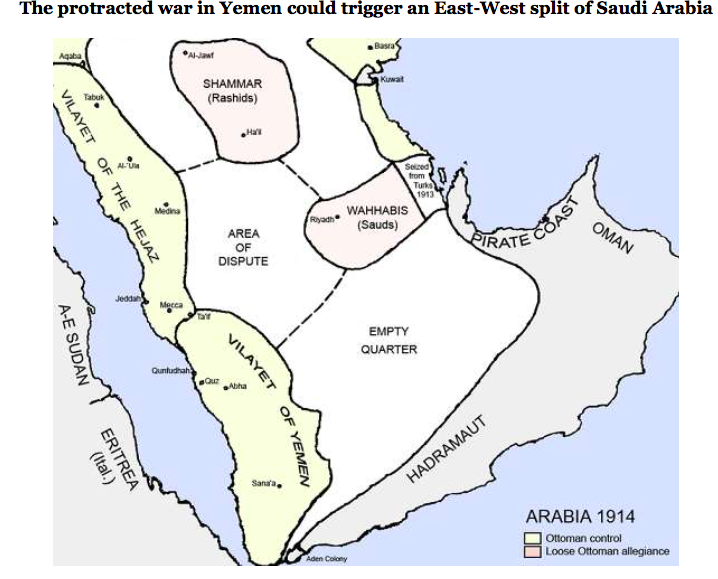 The ongoing reforms attack several key foundations of stability of the country. Recent cuts to social services and a deregulation of the domestic petroleum sector threatens lower-middle class support for the regime. A decree to allow women to drive, a loosening of gender restrictions weakens the support of the country’s clerical classes for the throne, while the recent internecine battles within the royal court and attacks on leading businessmen has split the upper echelons of society, and sowed seeds of discord and bitterness among many key families of the kingdom. In short the reform effort has more domestic enemies than supporters – and thus at the current frenetic pace, it is likely to fail. 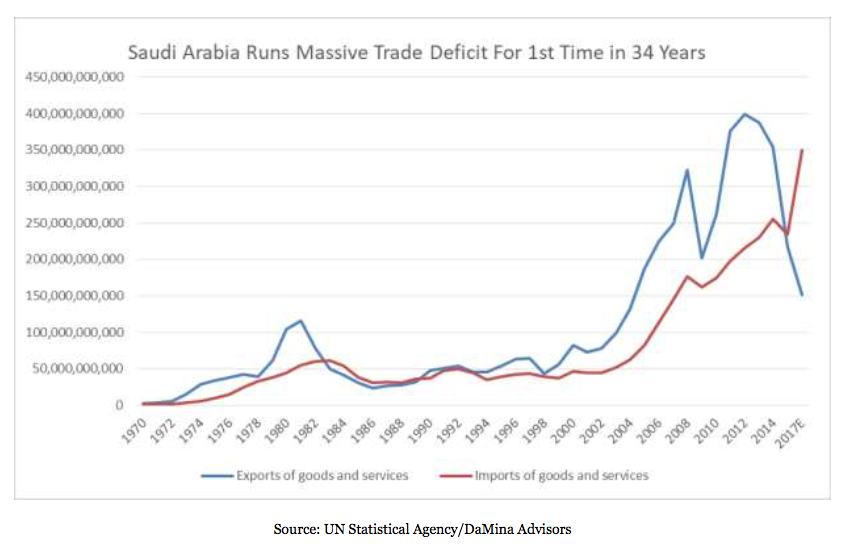 With King Salman himself beginning to harbor jitters over the radical pace of the reforms, with many of the country’s 7,000 princes, their multiple wives, thousands of wealthy children, elderly Wahhabi clerics and business associates beseeching the King to ‘calm down’ his son, and restore a semblance of unity within the royal family, it is only a matter of time before King Salman puts a break on the reforms or is himself is forced-out by frustrated reformers. If King Salman does not act sooner, angry conservatives may yet coalesce to force his abdication like his brother King Saud. Either the crown prince and his frenetic band of reformers will ultimately prevail, and push out the king, or both crown prince, and his father, will ultimately lose power, and lose their positions in a conservative palace coup.

In the early 1970s a similar struggle within the royal family between those princes aligned with deposed King Saud, who favored modernization, and Crown Prince Faisal, who favored status quo conservatism eventually ended in a regicide with a disgruntled young prince assassinating the king. With the splits within the ruling family among the powerful ‘Sudairi 7’ sons – particularly between late King Abdullah’s sons and King Salman’s offspring, the unity and stability of the kingdom is at risk.

Beyond politics, the country’s economy is mired in a technical recession (when Saudi GDP is discounted in real US dollars). With falling FX oil revenues, (by 40% since 2010) and an ever expanding military budget for the wars in Yemen and elsewhere in the region, unless a devaluation occurs, the Saudi economy will practically enter a period of protracted contraction – despite relatively stable global oil prices. Various sectors are poised for a pull back, not the least construction.

Regarding Saudi’s future oil production levels in the face of a devaluation, as has been witnessed in Nigeria, and Venezuela, there is a complex relationship between oil production and stable domestic monetary policy. When the Saudi Riyal is devalued the mismatch between USD costs of production (capital costs and expatriate labor) vis-à-vis, the operating costs of Saudi Aramco will widen dramatically, eventually leading to a decrease in oil production and a loss of leverage within OPEC+. A decrease in Saudi oil production will leave Russia to emerge as the de-facto leader of OPEC+, as most US production will be consumed locally. With Iraq, Iran, Venezuela, Qatar and Libya increasingly within the firm ambit of Moscow, any longer term instability within Saudi Arabia will inure to the long- term geopolitical benefit of Russia/Iran/China, and longer-term geopolitical loss of the USA/Western Europe. 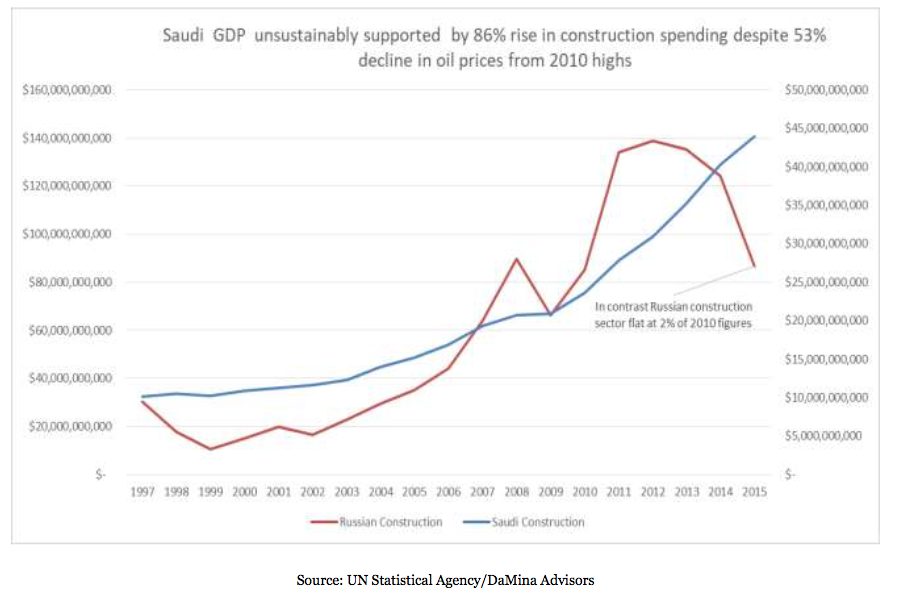