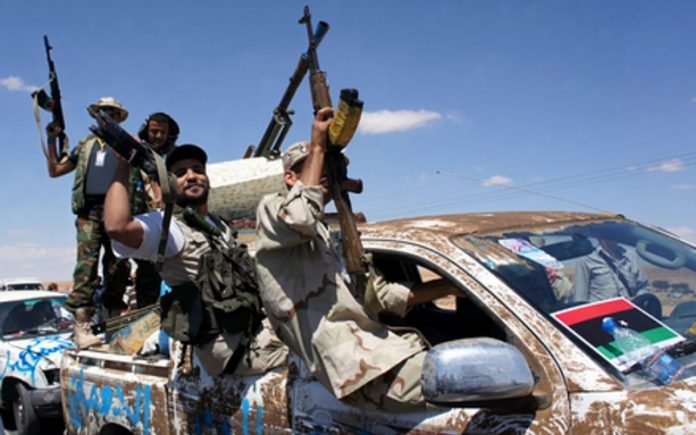 On September 11th, Libyan National Army (LNA) forces under General Khalifa Haftar have launched an offensive on the oil facilities in Ras Lanuf, al-Sidr, Az-Zuwaytinah, and Berga in the Gulf of Sirte. Until that moment, the sites had been under the jurisdiction of the Petroleum Facilities Guard (PFG), guided by Ibrahim Jadran. In Ras Lanuf and al-Sidr PFG officers surrendered without fighting and all the terminals have ended up under Haftar’s control. The vast majority of the operation was reportedly conducted by Sudanese and Chadian mercenaries.

The Tobruk government, led by Abdullah al-Thani, expressed its full support of Haftar’s operation and awarded him with the rank of Field Marshal. Meanwhile the leader of the Government of National Accord (GNA), Fayez al-Serraj, demanded a counter-offensive response by forces loyal to his administration in Tripoli. However, the request was denied by major militias from Misrata, currently occupied in their operations against IS in Sirte.

On September 12th, the UK, the US, Italy, France, Germany, and Spain presented a joint declaration condemning Haftar’s actions, demanding a withdrawal of his forces. The statement expressed support for al-Serraj and the GNA, encouraging “peaceful cooperation among Libyan armed forces.”

Haftar’s efforts to gain control of the oil terminals took place at a time when Misrata’s militias – the only ones capable of contrasting Haftar’s forces – have been severely degraded by their battle against IS, where they have withstood 500 deaths and over two thousand injured men. These losses have almost led to a rupture between al-Serraj and the Misrata forces, as the latter accused the former of not providing adequate support to the missions. Ultimately, the situation was rebalanced following US bombings, somewhat salvaging the relationship.

General Haftar has also exploited a situation in which the various tribes of Libya’s oil crescent have become increasingly hostile to Ibrahim Jadran. Not only did his PFG forces protect oil infrastructure, but they also controlled surrounding territories, enforcing the law and levying taxes. As oil output sank, the tribes that financed themselves with its revenues became impoverished, and have now become more open to support anyone able to rekindle production.

Haftar has reacted rapidly to avoid that an effort by GNA Minister of Defense Mahdi al-Barghathi, Haftar’s historical rival, to re-establish ties between local tribes and the PFG succeed. In July the National Oil Company, managed by the GNA, and the PFG had in fact signed an agreement to resume exports from Ras Lanuf and al-Sidr. Shortly after, on August 5, Haftar’s and Jadran’s forces clashed around Az-Zuwaytinah.

It is important to note that already in July the NOC had approved the merger with the “NOC 2” instituted by Abdullah al-Thani’s government in Tobruk. According to this deal, the unified NOC recognizes both the Tripoli-based GNA as well as the Tobruk government. NOC President Mustafa Sanallah remained in charge of the new entity, while the head of the NOC 2, Naji al-Maghrebi, has entered the board of the company. The two agencies have already merged their books, although they have yet to relocate to Benghazi as determined in the agreement.

The NOC currently aims to increase oil production from 290,000 barrels a day to 600,000 by the end of October. Ultimately, the GNA seeks to produce over 900,000 barrels a day by the end of 2016. Haftar has successfully established his stakes over future output, although avoiding to oppose the new agreement between the two energy agencies. On September 14, Haftar ceded control of the terminals to the NOC, although maintaining a leading role on security issues.

Haftar’s blitz seems to have been planned with the acquiescence of actors that have been on-paper GNA supporters. It is highly probable that NOC leaders were warned ahead of the operations. It is also likely that the passive stance of Misrata fighters was somehow guaranteed internally. Egyptian and French officials were certainly aware of Haftar’s plan, especially following Haftar’s visit to Chad and meeting with French representatives. Finally, we cannot exclude that the Italian government was also aware of such intentions, given the high-level tie between the Italians and the Misrata forces and the support given by the former to the latter over the past months.

What lies ahead for Libyan governance?

Al-Serraj has without a doubt become weakened as a result of these recent events. This was confirmed when Martin Kobler – UN envoy – visited Misrata and not Tripoli. On September 16 premier Abdullah al-Thani nominated Colonel Miftah Maqreef to become responsible of oil rigs ahead of Jadran. This move had been already attempted in the past by Haftar. Once again, this did not happen, thanks to Defense Minister al-Barghathi’s ties with Jadran.

Al-Thani’s desire to see Jadran replaced is seriously challenging al-Serraj’s credibility. On September 15th, al-Serraj visited Egypt. The following day, the head of the Egyptian Armed Forces – Mohammed Hijazi – reportedly proposed to replace current Minister of Defense al-Barghathi with Joma al-Marafi, former head of security under Ghaddafi’s government. According to Hijazi, this solution would see al-Serraj’s government finally approved by Tobruk following the latest disapproval in August. If realized, this compromise may ultimately be favored by Tobruk and its sponsors, France and Egypt, as well as Misrata and, consequently, Italy.

In recent days, efforts to consolidate the two governing bodies, with the Tobruk government destined to become part of the new Libyan legislative structure, faltered. The process was interrupted when a vote of confidence for al-Serraj was rescheduled five times and then abolished. Following the stall, relations between the GNA and Tobruk have rapidly decayed, and the danger for increased armed conflict is just around the corner.

Aldo Premoli is a co-founder of Mediterraneo, Sicilia, Europa. MSE is a non-profit organization working to address issues related to migration, integration, and political economics. Through its work, MSE tries to raise awareness of these issues while promoting socially and economically sustainable policies of inclusion and economic development in the Mediterranean and in Europe.