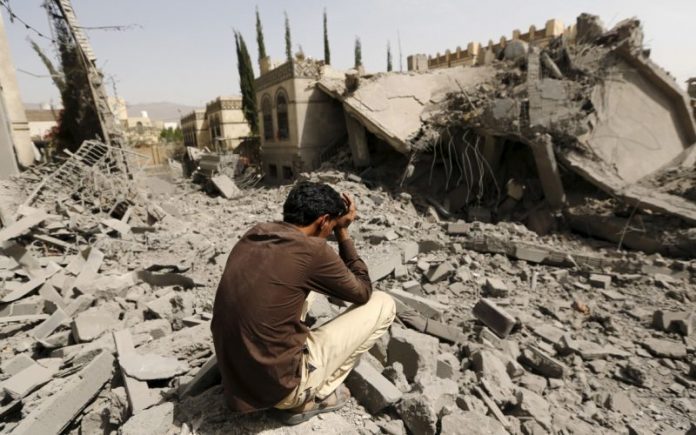 Calls for the restoration of South Yemen, a worsening humanitarian crisis and the machinations of intervening regional powers all compound Yemen’s woes.

Earlier this month, senior political, military, and tribal leaders in Yemen called for the secession of southern Yemen. Aidaroos al-Zubaidi, a former governor of Aden, made a televised announcement pushing for the secession of southern Yemen in front of the flag of the former nation of South Yemen. Al-Zubaidi particularly noted that the new body calling for the secession would fully cooperate with the coalition in Yemen in order to quell Iranian influence and terrorism from jihadist groups such as Al-Qaida in the Arabian Peninsula (AQAP). However, according to media sources, Saudi Arabia has not backed the proposed secession and aims to fight for a unified Yemen. The United Arab Emirates (UAE) on the other hand, has backed Al-Zubaidi; although it is unclear if the UAE backs Al-Zubaidi’s plan for secession.

Yemen has been embroiled in a civil war for the past two years. Even though the critical junctures of the civil war developed in 2015, there were earlier phases of the conflict that factored into the current situation. Ansar Allah, also known as the Houthis, is a Shia movement that formed in Sa’dah, a municipality and the capital of the Saadah governate situated in northwestern Yemen. Houthi militants have clashed with Saudi security personnel since the kingdom’s involvement in military operations in 2015 and roughly 10,000 persons have been killed in the conflict thus far.

In the current state of the conflict, Saudi Arabia is attempting to deal the Houthi militants a decisive blow in the coming months. On the surface, the conflict appears to be a traditional proxy war pitting the Saudi backed-Yemeni central government against the Iranian-backed Houthi militants. However, the conflict has grown more confusing when one includes AQAP. There has been serious concern that AQAP has directly and indirectly received weaponry from the Yemeni central government and the Saudi military. Besides a US military raid that left one navy SEAL dead and civilians dead in February of this year, the US has largely been on the sidelines of the Yemeni civil war. President Donald Trump’s recent visit to Saudi Arabia could once again tip the scales in the Yemeni government’s favor given the US’ $110 billion weapons deal to Saudi Arabia.

Beyond concerns about military-related clashes, an ongoing cholera outbreak and a potential nationwide famine continue to affect large segments of the populace in Yemen. According to the World Health Organization (WHO), 315 persons have been killed by a cholera outbreak since April 27. Officials from the WHO also warned that  as many as 300,000 cases of cholera could develop in the next six months.

If Saudi Arabia does indeed push its attacks deeper into southern Yemen, further clashes will most likely ensue with Houthi militants which might exacerbate the already dire humanitarian situation. On Friday, the United Nations warned that the Saudi military’s planned attack on the Hodeidah port situated in southwestern Yemen along the Red Sea could push Yemen even closer to the brink of famine as the port is the entry point for eighty percent of Yemen’s food imports. Additional skirmishes between Saudi forces and Houthi militants could give tribal leaders a more compelling argument for the secession of southern Yemen. At the same time, the protracted involvement of Iran and Saudi Arabia may stymie any progress put forth for secession.

Key Wildcard factors in play in Yemen’s proxy war are the United States and the UAE. Sustained involvement from the UAE may eventually lead to the gulf state backing secession efforts which has been viewed as a scheme emanating from the country. Finally, if President Trump’s administration takes a more proactive stance in Yemen through troop involvement or even logistical or strategic guidance of Saudi troops, the civil war could increasingly change shape.

Warsame Galaydh is an Analyst at Global Risk Insights. As originally appears: http://globalriskinsights.com/2017/05/yemen-forgotten-war-new-developments/