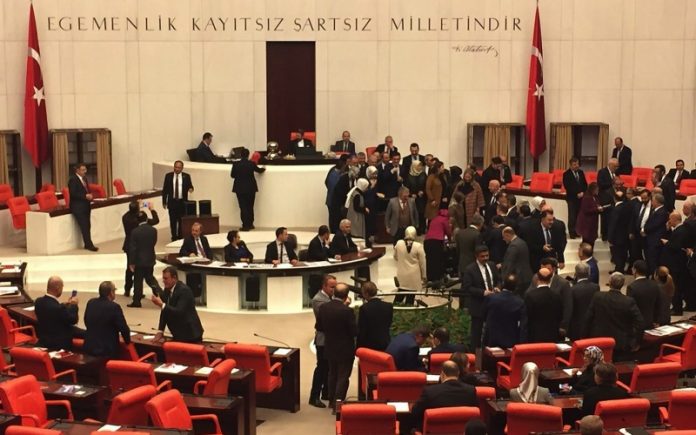 On April 16, Turkey’s citizens will vote on proposed changes to Turkey’s constitution, which would grant more powers to the president.


Its proponents say that the changes to the constitution, which would introduce what is being called a ‘presidential system’ to Turkey, will make the country stronger and the government more effective. Its harshest detractors say that it will effectively turn Turkey into a dictatorship. The position of prime minister would be removed and the president would be the ultimate authority, with the power to issue binding decrees.

At the very least, the proposal seriously risks entrenching into Turkey’s politics the majoritarian approach that the current government has increasingly turned to since around 2010. Moreover, the lack of checks and balances in the proposed system represents a danger to the already compromised independence of the country’s institutions and the strength of the rule of law. The attempt to introduce this system has been registered by the markets as a risk factor. However, the successful passing of the changes could provide a temporary boost to risk assessments of Turkey both from a security and economic perspective.

Firstly, this is because now that the government has invested so much political capital in bringing through these changes, their failure would be sure to create some turbulence. Secondly, and more significantly, imbued by the changes and with increased powers, the government could take some bold steps to improve the country’s security and economic situation. Most importantly, the government’s eagerness to introduce the presidential system, and consequently its need for and the uncertainty around its success at the upcoming referendum make it especially sensitive to anything that could impact its popularity.

Currently, the government is hesitant to increase interest rates. This is despite calls from international investors to do so and despite the fact that orthodox economics suggests this is the best approach. The hesitancy is likely because of the hurt this would cause to ordinary citizens. Most economists reason that this temporary pain would be beneficial in the long term to stem inflation and prevent potential economic meltdown. Once the changes have passed, presuming they do, the government would find itself in a more secure position and might be more willing to carry out helpful but initially unpopular moves.

In a similar vein, the government would find itself in a better position to enter into talks with Kurdish militant groups fighting the state for two reasons. Firstly, over the last two years, anger towards Kurdish groups has soared as violence has raged. The government has taken a pro-active, hard-line approach to these groups, and receives some of its support from this. It will have to make the case for engaging in talks and this could lead to loss in popularity. Moreover, the government is currently reliant on support from the Nationalist Movement Party (MHP) to push through changes. The ultra-nationalist MHP favours a hard-line approach to Kurdish militant groups.

Fearful of war weariness, there is reason to believe that the government would consider restarting peace talks. The political traction the government can generate with the issue of security, an issue which it has been used extensively these last years, appears to be diminishing. Deputy Prime Minister, Numan Kurtulmus, recently promised that the presidential system would mean an end to terrorism. This suggests that the government will be easing its use of (in)security as a political issue. As with its approach to the economy, with the pressure of the upcoming referendum lifted and a stronger president, the government could conceivably adopt a more long-term beneficial and less populist policy approach to security.

Consequently, if the presidential system is introduced, there could be an improvement in Turkey’s security situation in the short term. Similarly, with the country’s economic situation worsening, the government will surely be pushed to take a more orthodox approach at some point. With the uncertainty of the referendum behind it, the government would likely be more inclined to do so.

However, in the long term, there is more to be concerned about. The government and its support base’s increasingly paranoid psychological state, understandable given the events of the past year even if regrettable, have made them instinctively defensive and easily spooked. With such broad powers, the temptation to engage in undemocratic repression of dissent will be ever present. The same goes for the country’s civil service and judiciary, whose independence is slowly being eroded. Again, here there will be temptation to increase the use of positions of influence for patronage purposes.

The use of positions for patronage increases the government’s reliance on the support of interest groups to ensure the loyalty of the state apparatus, a factor which contributed to last year’s coup. The repression of dissent, while creating stability in the short term, is likely to lead to a re-emergence of Turkey’s security problems in the medium to long term.

George Dyson is a research analyst at Global Risk Insights.

As originally appears on: http://globalriskinsights.com/2017/03/potential-benefits-proposed-changes-turkeys-constitution/