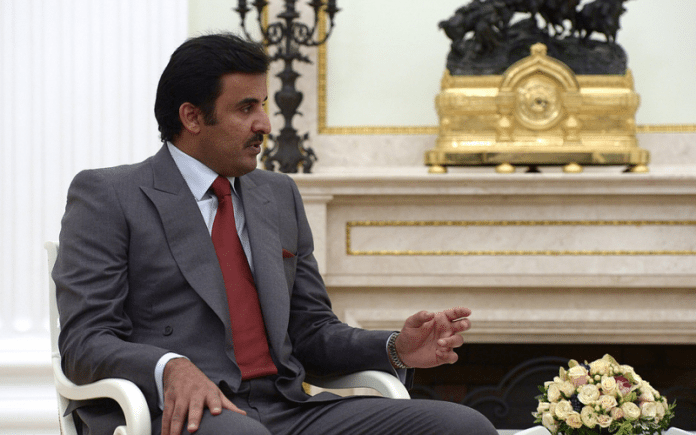 With Emir Tamim – the youngest head of state in the Middle East – Qatar aims to rapidly expand and diversify its economy while tempering its foreign policy.

Across the Gulf, oil-rich countries are adjusting to the economic and political realities of low energy prices. These countries are also navigating a dynamic region, characterized by security threats and political instability. Qatar is doing so under Emir Tamim bin Hamad al-Thani, whose leadership aims to move the country away from the politics of the past.

The British-educated emir ascended to the throne after his 61-year-old father, Hamad bin Khalifa al-Thani, announced his abdication after ruling for 18 years in June 2013. Prior to his ascension, Sheikh Tamim served in numerous government leadership roles; including as the deputy commander-in-chief of Qatar’s armed forces. His most acknowledged role was as a sports administrator, where he raised Qatar’s international profile as a sponsor of international sporting teams and events. It was under his guidance that Qatar won the rights to host the 2014 FINA Swimming World Championships and the 2022 FIFA World Cup.

Yet it was under Sheikh Tamim’s father and his uncle Hamad bin Jassim bin Jaber al-Thani — who simultaneously served as Qatar’s foreign minister, prime minister, and chief executive of the Qatar Investment Authority — that Qatar attained much of its prosperity. The county’s vast oil and gas reserves gave Qatar the highest GDP per capita in the world. This energy wealth enabled Qatar to: establish Al-Jazeera as a prominent international news source, draw up significant investment stakes in European and Asian markets, develop satellite campuses of top American universities in Doha’s Education City, and become a prominent regional sponsor of arts and culture. In his fourth year of rule, Emir Tamim aims to capitalize on these past achievements and steer the country toward new goals.

At 36 years old, Sheikh Tamim is the youngest head of state in the region. The emir has correspondingly inducted younger individuals into the rest of government. Three appointees of his 18-member cabinet are under the age of 45, including 36-year-old foreign minister Mohammed bin Abdulrahman al-Thani. Younger individuals have also filled the government’s rank-and-file, especially within Qatar’s diplomatic corps.

Similarly, Sheikh Tamim’s government is composed of young technocrats, a move which aims to inject efficiency and discipline into the Qatari bureaucracy. The emir has sought to promote innovation and information technology to streamline administrative operations, adopt e-government initiatives, and focus on delivering public services effectively.

The emir has also reduced his family’s presence in government. Only four al-Thanis exist in ministerial roles — the lowest ever — and Sheikh Tamim has further overhauled the leadership of prominent Qatari state-owned entities like the Qatar Investment Authority, Qatar Petroleum, and the Qatar Foundation. This suggests the Emir is broadening his decision-making base beyond the small family circles that characterized his predecessors’ governing styles.

In contrast to Qatar’s past approach to foreign affairs, Sheikh Tamim has been pursuing a quieter international role for Qatar. Under his father, Qatar largely assumed an assertive foreign policy, brokering an end to Lebanon’s 2008 political crisis and wading into conflicts in Ethiopia and Eritrea. It maintained close ties to Iran and Hamas in Palestine while hosting one of the largest American airbases and various Israeli officials.

Yet amid the Arab Spring uprisings, Qatar professed support for the Muslim Brotherhood and other Islamist revolutionary movements in the region. This fueled tensions with many Gulf countries opposed to those movements and even caused Saudi Arabia, Bahrain, the UAE to withdraw their ambassadors to Qatar in early 2014.

Since then, Emir Tamim’s accession has produced a tempering of Qatari foreign policy. Early in his tenure, the emir expelled Muslim Brotherhood members from Qatar and fully aligned with Saudi leadership in Gulf decision-making, particularly regarding Syria. His current foreign minister Sheikh Mohammed maintains a relatively low-profile abroad, and the minister’s background in economics and business suggests Qatar may be re-calibrating its foreign policy focus from regional political conflicts to economics and trade.

With tumbling oil prices, the Qatari economy is facing pressure. Following 15 consecutive budget surpluses, Qatar now possesses a budget deficit of $12.8 billion for 2016, or 0.7% of GDP. Unemployment is also projected to rise from 0.2% in 2016 to 1.2% by 2020. The country’s GDP growth rate has also contracted sharply since 2015.

Sheikh Tamim has responded to these trends with austerity measures. He has consistently stressed fiscal discipline since his first speech as emir, and has aggressively sought to reduce the size and reach of government. The emir has already reduced the number of government ministries, slashed state institutions’ budgets by up to 40%, stalled plans to roll out a national healthcare scheme, and directed the cessation of numerous subsidies. All this has been accompanied by hikes in utility rates, gas prices, government fines and service costs by up to 30%.

In line with his Qatar National Vision 2030, Emir Tamim aims to diversify Qatar’s economy away from oil and gas. Over the next decade, the emir hopes to develop the country’s traditional and Islamic finance sectors, increase entrepreneurship and the innovation economy, as well as continue to grow its media, tourism, sports, and construction sectors. Construction will expand in the short-term, as the government intends to spend $220 billion on infrastructure projects related to the upcoming FIFA World Cup.

More important to the emir’s economic agenda is private sector growth and attracting investment. Sheikh Tamim has initiated reviews of state-owned enterprises with the goal of transferring them to the private sector. He has barred state institutions from engaging in economic activities without the Prime Minister’s permission, and has called for the creation of special economic zones, public-private-partnership investment schemes, and the elimination of red tape to incubate private business and attract foreign capital. Non-Qataris have been further allowed to increase their equity stake in companies listed on Qatar’s Stock Exchange. Furthermore, GCC citizens have been granted the same economic privileges as Qataris.

Qatar’s stability increases the likelihood of realizing Emir Tamim’s economic vision. The country is the second most stable country in the Middle East after the UAE, given its robust security apparatus and general satisfaction among Qataris with their government.

Yet the regime’s authoritarian tendencies may complicate that satisfaction. Qatar possesses robust restrictions on freedom of expression and on women’s’ rights. This is unlikely to change due to the ruling family’s fear of disempowerment and Emir Tamim’s likely association of democratization with the Arab Spring uprisings’ messy aftermath.

More prominent is the human rights violations present in Qatar. Less than 10% of the country’s population are Qatari nationals, and economic activity is increasingly dependent on migrant labor. This labor is often exploited under terrible working conditions, and has drawn widespread criticism, particularly with regard to ongoing World Cup preparations. Sheikh Tamim has done little to reform Qatari labor law, and global attention to Qatari worker practices could complicate investment in the country.

While Emir Tamim signals a positive outlook for Qatar, he will have to navigate these political issues to steer his country toward new successes.

Azhar Unwala is an analyst for government and corporate clients in Washington, D.C.