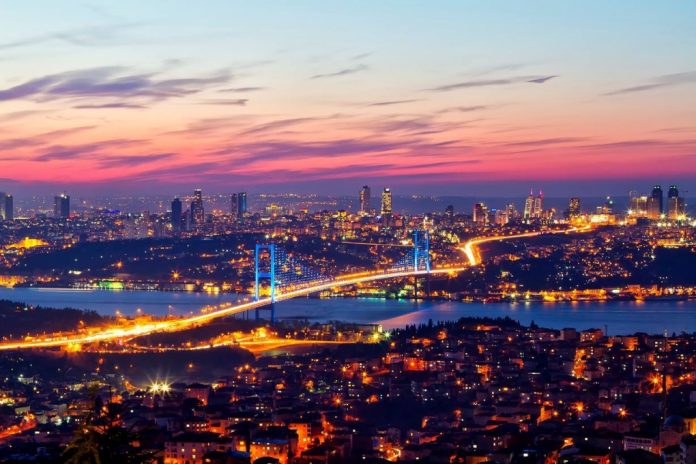 The election results in the U.S. have triggered withdrawals from the emerging markets. Since the elections, the MSCI Emerging Markets Index (MXEF) has declined from 905 to 866 (4.3%). Still, not all countries have experienced the same level of withdrawal.

Turkish equity wasn’t affected as much as other emerging markets’ equity, and as a result, the MSCI Turkey Index (MXTR) declined by only 1.87%.

One of the primary driving forces behind the returns on equity is exchange rate, which is influenced by the political risk and economic conditions of the country.

Since the elections, the currencies of many emerging markets have significantly lost their value, and the Turkish lira was the biggest loser.

As a result of the currency devaluation, the share price of the largest single country ETF, iShares MSCI Turkey ETF (NYSEARCA:TUR), declined from $36 to $32.22.

Since November, the iShares MSCI Turkey ETF hasn’t experienced outflows, but instead $7.3 mm in inflows, meaning that investors are optimistic about Turkey.

In my previous article, I explained that Turkey is one of the fastest growing economies that has experienced economic slowdown and a significantly increased political risk for the last year.

In this article, I will analyze potential changes in the political and economic environment that may have changed investors’ outlook.

The failed coup triggered investors’ concerns about political stability. As a result, the Turkish government declared a state of emergency until January 2017.

On November 4th, Turkish authorities arrested opposition and shut down the Internet across the country. The latter action showed that Turkey seems to be moving away from democracy. The current president, Erdogan, is consolidating power and preparing to make changes to the constitution early this spring that will transform the country from a parliamentary democracy into a presidential system.

Under the Turkish constitution, if Erdogan wins the election in 2019, he will be able to run the country until 2024, but the potential alterations to the constitution would allow him to be elected for the next two terms.

The consolidation of power in the hands of Erdogan has increased concerns about political freedom in the country, which has led the European Parliament to vote for the suspension of negotiations concerning Turkey’s European Union membership.

Last March, the European Union and Turkey reached a deal that provided Turkey with $6.4bn in exchange for keeping migrants from entering Europe.

In response to the European Parliament vote, Erdogan has threatened to break the deal and flood Europe with migrants. At this time, Turkey is moving further from the European Union and democracy, which is increasing the political instability in the country.

Erdogan recently asked citizens to convert their foreign currency savings into Turkish lira and buy gold to stimulate the economy and support the lira. As a result of this speech, Turkey’s first stock exchange has converted all cash assets in Turkish liras. This effort will strengthen the lira in the short term, but will not affect it in the long term.

Erdogan wants to cut interest rates by 0.5%, which, combined with an expected increase in interest rates in the U.S., would strengthen the U.S. dollar and further weaken the Turkish lira.

On November 24th, the Central Bank of Turkey increased interest rates by 0.5% to support the lira; this action was criticized by Erdogan. The inflation data for November surprised analysts, who expected inflation to be around 7.5-7.8%.

The actual number was 7%, which was caused by low prices on food; this is in Turkey Central Bank’s target range of 3-7%. Therefore, it is reasonable to expect that the Central Bank will put potential alterations on interest rates on “hold,” and will not be able to increase interest rates to support the national currency.

Nevertheless, for the last month, the holdings in U.S. dollars increased from 68 bn to 71.36 bn.

This indicates that people don’t trust the lira, and despite the weak currency, would prefer to save in U.S. dollars; this will likely lead to a vicious cycle in which the further weakening of the national currency motivates people to buy even more U.S. dollars, devaluing the lira even more.

For the last month, the foreign exchange currency reserves have decreased significantly, which limits the government’s ability to support the national currency.

The economy has slowed down, but still has stable growth of GDP. Nevertheless, Turkey is experiencing a current account deficit, and with a weaker lira, this is expected to increase further. To support the economy and exchange rate, Turkey will be more dependable on the foreign investments, which are decreasing due to the political instability.

The difference in equity performance denominated in Turkish liras and U.S. dollars was significant throughout the year, which is explained by the depreciation of the national currency after the failed coup.

After the elections, the fund performance dropped dramatically both in Turkish liras and U.S. dollars.

The fund has a high exposure to the financial sector (39.63% on average), which is the largest underperformer. On December 7th, Fitch changed the outlook for Turkish banks to negative from stable.

Fitch has a negative outlook on 80% of Turkish banks and believes that the government will not be able to support state-owned banks. Private banks face worsened operating environments and credit profiles.

The number of foreign banks participating in syndicate loans has decreased: the rollover ratio decreased from 155% to 81% in the first half of the year. The adverse outlook on doing business with Turkish banks in the future explains the decline in loan participation.

The USD-denominated loans comprise about a third of total loans, which increases the probability of borrowers missing payments for more than 90 days. Nevertheless, Turkish banks have been well-capitalized since 2001, and the weak lira has led to an increase in non-performing loans from 3.01% to 3.34%.

The example of Russian and Brazilian markets, which had a significant political risk and depreciation in currency, shows how an underperforming market can transform into an outperforming market in two years.

Andrii Taranukha is an Asset Management Analyst at Credit Suisse.