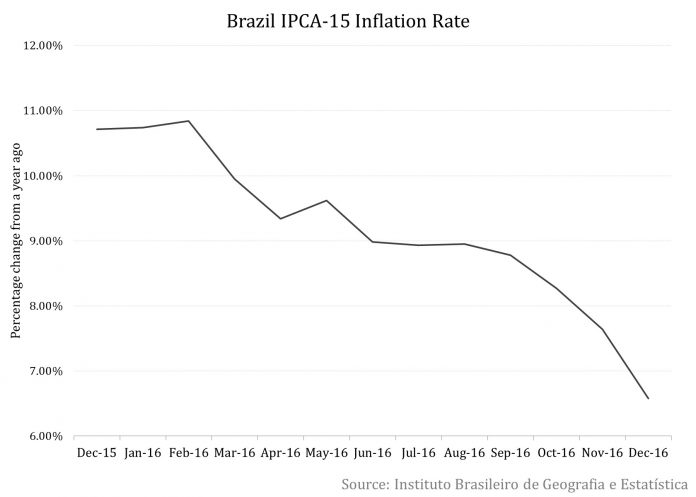 This is post 2 of 2 in the series “What is Brazil’s quarterly inflation report indicating about the Selic?”

The mid-month CPI (consumer price index) inflation in Brazil, known as IPCA-15, fell in the 12-months leading to mid-December. Inflation by that measure fell to a 6.58% rate, compared to 7.64% in the 12-months to mid-November.

The decline in the IPCA-15 in December was close to the upper end of the government’s target level for inflation which is 6.5%.

On a month-on-month basis, inflation rose just 0.19% in December – the lowest pace seen since 1998, and matching the pace witnessed in October. In November, the index had risen 0.26%.

Among categories comprising the IPCA-15, transport rose the quickest in the one month period to mid-December, up by 0.8%. It was followed by personal expenses and apparel, which rose by 0.6% each. On the other hand, prices for the household articles category fell 0.5% in the period, followed by housing, which saw a decline of 0.3%.

Usually, a rise in inflation is indicative of increased economic activity. In such a situation, the unemployment rate comes down; economic activity cannot increase if people are out of jobs. However, there can be a situation in which this congenial relationship can get twisted.

Brazil (EWZ) (FBZ) has struggled with stagflation. The phenomenon refers to a situation in which economic growth is slowing or contracting, inflation is rising, and unemployment is high. A sustained period of time in which the economic indicators behave as mentioned is considered to be stagflation.

In such a situation, the conventional monetary policy tools become ineffective for at least some time. For instance, if a central bank raises interest rates in order to rein-in inflation, the move would further hurt economic output. Meanwhile, if it cuts rates further in order to resuscitate the economy, the move will further accelerate inflation.

This fall in inflation is good news for Banco Central do Brasil – the country’s central bank – as it works towards breaking the vicious cycle of soaring inflation and contracting economic growth. This move can prompt the Bank to cut rates at a sharper rate than earlier anticipated in its next meeting in January.

The Banco Central do Brasil also released its December inflation report. Let’s look at its highlights in the next article.

This is post 2 of 2 in the series “What is Brazil’s quarterly inflation report indicating about the Selic?”