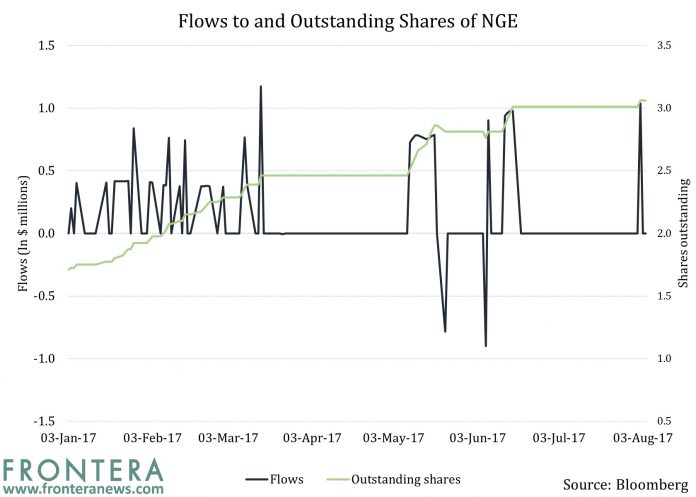 At one point this year, the Global X MSCI Nigeria ETF (NGE) – the sole ETF traded on US exchanges providing exposure to stocks from Africa’s most populous nation – was down 14% for the year. This was three months ago in May. But as of August 7, the ETF is now up 28% for the year and has been nearly consistently gaining ground for the past month.

The NGE, which is invested across only five of the 11 Global Industry Classification Standard (GICS) sectors, has seen nearly all of the surge accounted for by the financials sector with the highest contributions coming from stocks of Guaranty Trust Bank and Zenith Bank.

The strong performance has resulted despite consumer staples dragging on the fund’s total returns, led downward by Nigerian Breweries and Nestle Nigeria. According to Bloomberg data, net inflows to the ETF in YTD 2017 until August 4 stood at $22 million.

With a price-to-earnings ratio of 9.37, Nigerian equities are an attractive proposition for investors who intend to go beyond their traditional investment avenues.

But another reason has caused the strong performance of stocks: improved liquidity in the currency market. The country’s central bank let the Nigerian naira float last year, which resulted in a sharp drop in its value, as shown by the graph above. However, behind the scenes, it could be gauged that the rate is being controlled due to the disparity between the official quote and the one on the parallel market.

In April, the central bank allowed for a new forex window which had the naira trading at rates closer to the parallel market. That window has allowed for increased dollar liquidity, which has in turn raised investor enthusiasm. Otherwise, even after strong gains, they would be stuck with stocks they would’ve wanted to offload due to scarce dollar availability.

Strong H1 2017 corporate profits have also played a role in the rise.

Nigerian equities are cheap, corporate profits are on the rise, and increased dollar-liquidity enhances their appeal. But the investment does not come without risk.

First, there are multiple exchange rates in the country. According to Reuters, including the rate at the window introduced in April, the country has at least six exchange rates. The sharp rise towards the end of the graph above is due to the fact that from August 1, banks have started quoting rates using a trading window rather than the interbank rate.

This decline in the naira is negative for overseas investors as it reduces the return on equities. Combined with multiple exchange rates, this can reduce the appeal of stocks.

The other primary risk factor emanates from President Muhammadu Buhari’s health. In July, a delegation from his political party visited him in London, where he is being treated for an undisclosed illness.

Any untoward development on that front could also be detrimental to equities.