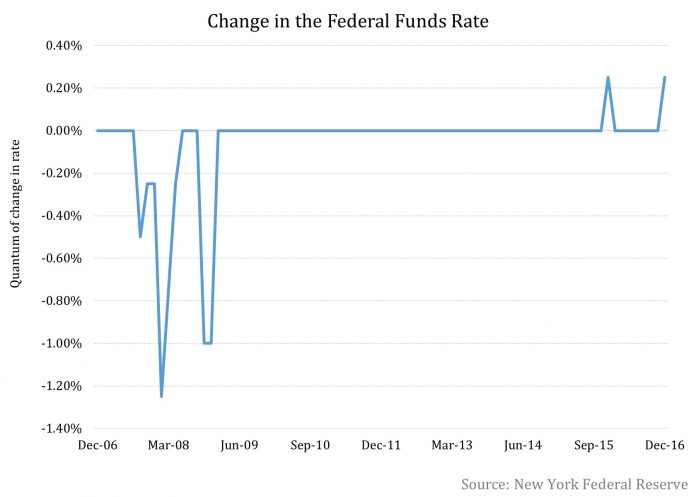 The FOMC (Federal Open Market Committee) – the rate setting body of the US Federal Reserve – ‘met expectations’ when it announced changes to its monetary policy stance on December 14, 2016. It raised the federal funds rate by 25 basis points as had been expected by most market participants for quite some time. The short-term benchmark rate would be in the 0.50-0.75% range now.

The December meeting marked the second time in two years that the FOMC has moved on interest rates. The meeting ended with a unanimous decision on the quarter point rate hike and market the first in three meetings in which all voting members of the FOMC were in favor of the direction of monetary policy.

The September and November meetings were relatively stormy affairs with three and two members, respectively, voting against the general consensus. On the 7-3 vote in the September meeting, Bloomberg had noted that “The committee’s split marked only the fourth time since 1992 that three FOMC voters broke ranks with a majority decision.” In that meeting, Kansas City Fed Chief Esther L. George, Cleveland Fed Chief Loretta J. Mester and Boston Fed Chief Eric Rosengren were desirous of a rate hike.

The primary reason for the decision

The improvement in labor market conditions and the rise in inflation are the primary reasons which led the FOMC to increase interest rates. On labor market conditions, the November statement read that “Job gains have been solid in recent months and the unemployment rate has declined.” Meanwhile, on inflation, though they held that the pace of price rise is below the mandate 2% level, it “has increased since earlier this year.”

A tightening of labor market conditions, including wage pressure, puts upward pressure on consumer spending, which is beneficial for ETFs like the Consumer Discretionary Select Sector SPDR Fund (XLY) and the SPDR S&P Retail ETF (XRT). An increase in interest rates keeps inflation in check and prevents hyperinflation.

In the next article, let’s look at what the FOMC had to say about major economic indicators of the US.