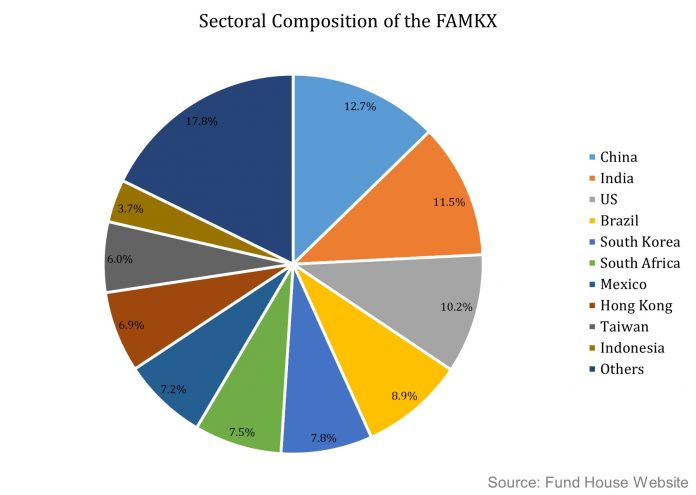 The Fidelity Advisor Emerging Markets Fund invests at least 80% of its assets in securities issued by emerging market countries. The fund house considers countries defined by MSCI, World Bank, and other countries displaying emerging characteristics as its investment universe.

The fund was incepted in March 2004. As of the end of November 2016, it had been managing assets worth $413.4 million. Meanwhile, as of October-end it had a total of 153 holdings in its portfolio. The fund is managed by Sammy Simnegar.

The Fidelity Advisor Emerging Markets Fund – Class A (FAMKX) has returned 27.1% in the YTD period until December 12. Its performance in the past month until December 12 has been excellent with ~9% returns.

In terms of market cap allocation, the fund is broadly aligned with its benchmark, the MSCI Emerging Markets (G). Its weighted median market cap of $16.3 billion is just $2.1 billion lower than that of the benchmark.

In terms of sectoral composition, the information technology sector is the most invested by the FAMKX. The sector forms over a fourth of the fund’s net assets. Financials is a distant second, followed by consumer staples. Consumer discretionary and industrials round-off the top five invested sectors by the fund. Compared to its benchmark, the fund is sharply overweight the consumer staples, industrials, and health care sectors, while being drastically underweight the financials, energy, and telecom services sectors.

Investments in Chinese stocks stand at 12.7% – the highest for an individual country. India and the US follow, forming a combined 21.7% of the assets. Brazil and South Korea round-off the top five invested countries.

You’d require to make a minimum $2,500 initial purchase in order to invest in the fund. There is no minimum for additional investments. For Class A shares, the fund house can levy a maximum sales charge of 5.75% as a percentage of the offered price. It charges a redemption fee of 1.5% of the amount redeemed if investments are liquidated within 90 days. The fund is a bit expensive. Inclusive of the management fee of 0.8%, the expense ratio of the fund is 1.52%.

Let’s look at the Dreyfus Emerging Markets Fund – Class A (DRFMX) in the next article.