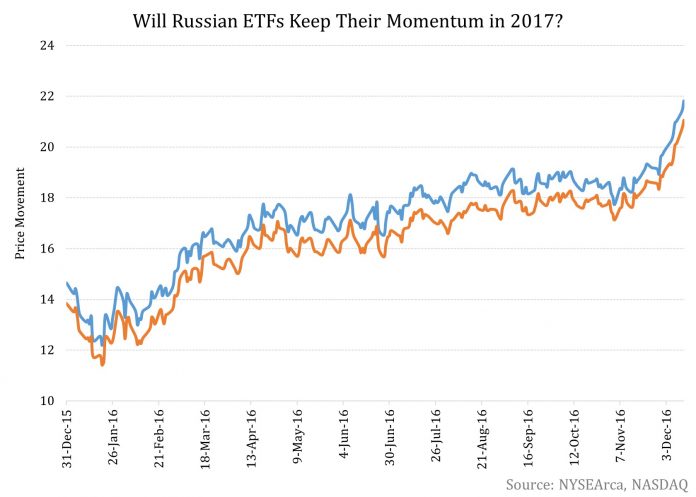 This is post 2 of 4 in the series “but can they keep their momentum?”

During his Presidential campaign, Donald Trump had shown a lot of admiration for Vladimir Putin. He had admired Putin’s control over Russia and had stated that he’d get along well will the Russian chief. While being interviewed on NBC’s Commander-in-Chief Forum, Trump had stated that “It’s a very different system and I don’t happen to like the system, but certainly, in that system, he’s been a leader, far more than our president has been a leader.”

On his part, Putin had termed Trump as ‘talented’ and had called him the leader of the Presidential election.

When Trump secured his election, Putin was one of the first to congratulate him. The Russian Parliament had celebrated Trump’s triumph and the Russian media had expressed hope of better relations between the Cold War rivals. Russian equities were one of the instruments which had posted gains after Trump won the election. ETFs like the VanEck Vectors Russia ETF (RSX) and the iShares MSCI Russia Capped ETF (ERUS) had risen 2.5% and 2%, respectively, on November 9 from a day ago.

There are hopes that when Trump assumes office in January 2017, he may lift the economic sanctions imposed on Russia since 2014. If this happens, it will provide a fillip to energy, finance, and defense sectors as they were the primary target of the sanctions.

But is trouble for Russia emanating from Europe?

On December 13, German Chancellor Angela Merkel and French President Francois Hollande expressed their support for extending the aforementioned economic sanction on Russia. At present, the sanctions are to end on January 31, 2017. It is expected that the European Union may agree on extending the sanctions on Russia on December 15.

The primary reason for European leaders’ desire to extend the sanctions has been Russia’s slow progress on the Minsk peace plan which aims to end armed conflict in eastern Ukraine.

This difference in views between the US and Europe on lifting economic sanctions on Russia are making it difficult to assess whether Russian equities can carry forward their present momentum to 2017. Though the rise in crude oil prices have provided warmth, winter is not yet over for Russia.

This is post 2 of 4 in the series “but can they keep their momentum?”