Equity investors looking to rise with the tide take note that the world’s largest equity markets (by market capitalization) are NOT the world’s fastest growing capital markets. 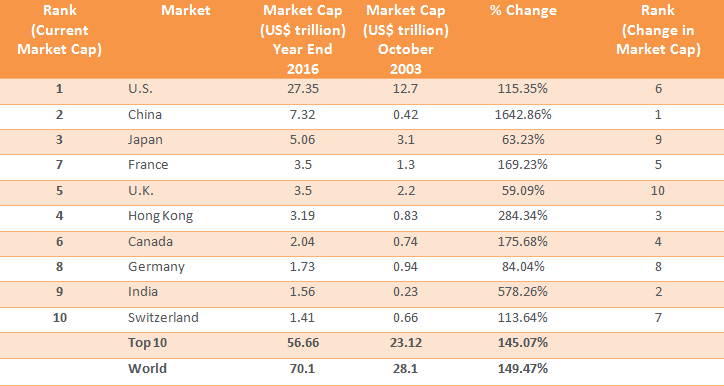 Stock markets in China and India have grown exponentially

Compared to this, Asian emerging stock markets have grown by leaps and bounds.

Developed markets (EFA) (VEA) such as the UK, Japan, and Germany have risen by 59.09%, 63.23%, and 84.04%, respectively, during the period, underlining the fact that growth in equity markets isn’t an area where these markets stand as leaders. Emerging markets (EEM) (VWO) such as China and India are set to continue to expand.

We’ve ranked the top 10 stock markets of the world by growth achieved over the past 13 years (last column in the chart above). Accordingly, the U.S., the U.K, Japan, and Germany rank low at 6, 10, 9, and 8, respectively, while emerging markets such as China and India have been the number 1 and number 2 performers, respectively.