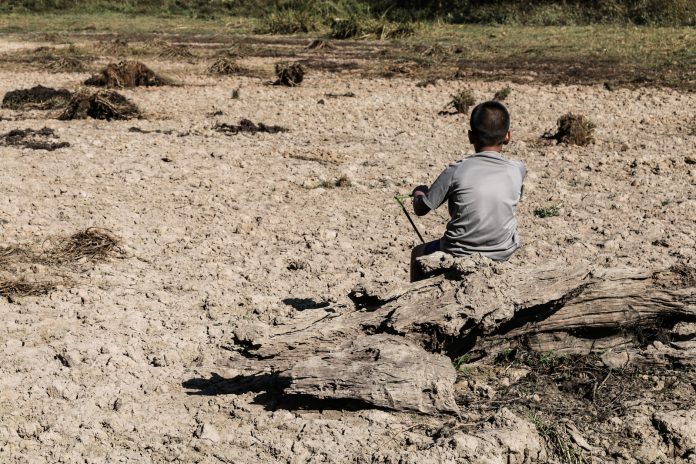 Sri Lanka’s ongoing drought is not only a humanitarian crisis, but also an economic one, as the country’s economy suffers on multiple fronts.

Sri Lanka has been experiencing rainfall shortages since last October, resulting in the worst drought in 40 years. With the country’s economy under severe stress, there is little relief in sight until the June / July monsoon season. Some districts have seen a 60-70% reduction in rainfall, resulting in widespread land degradation. This has led to the lowest amount of cultivated acreage in 30 years, with the World Food Program noting that only 35% of the country’s rice paddies had been cultivated by November 2016.

Concerns over food production are common during droughts, yet the situation in Sri Lanka highlights the convergence of multiple risk factors. The lack of rain has not only damaged rain-dependent crops, but has also led to a shortage of irrigation water necessary for the country’s water-intensive staple crop – rice. Agriculture accounts for 9% of Sri Lankan GDP and employs 28% of the country’s workforce. In response to the drought, the government announced the implementation of relief payments to the approximately 900,000 people affected by the drought.

Specifically, the government will provide Rs. 10,000 ($66) for every acre of blighted land per family per month for four months. With around half of national rice paddy acreage affected (1.5 million acres), the cost of this effort will account for between 0.1 and 0.2% of GDP; this does not include relief efforts for other crops.

The agriculture sector is not expected to make a full recovery in 2017, even if sufficient rain falls during the rest of the year. In order to combat food shortages, the government has accepted food and water aid from India, Indonesia, Pakistan and Thailand as well as increased food imports. To encourage imports Sri Lanka has cut import taxes on rice from 15 to 5 rupees per kilo. While this may aid imports, the measure also adds additional fiscal pressure on a government whose foreign reserves are dwindling. 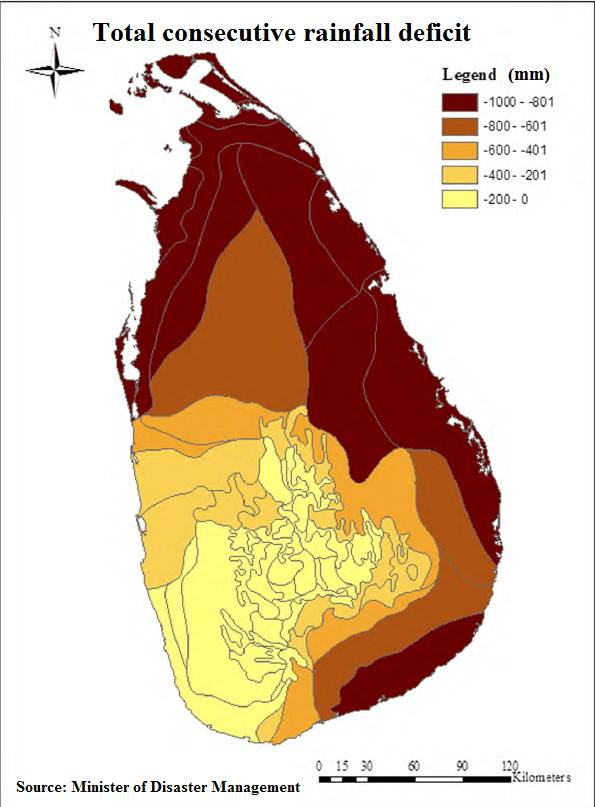 Another issue are the government price controls on rice which, while fixing prices between Rs 70 and Rs 80 per kilo of various types of rice, risks unrest. The government is attempting to prevent inflation and price-gouging from further exasperating the food crisis, but not everyone is happy. While the move benefits (especially low income) citizens, rice millers are complaining about losses. Having purchased rice at higher wholesale prices prior to pricing limits, millers are now being forced to sell at a loss. On February 13th, some 120 leading millers refused to sell at government prices, calling for between Rs 80 to Rs 90 per kilo, and demanding to meet with President Maithripala Sirisena.

On February 21st, Sri Lanka’s price control agency conducted cross-country raids on 52 stores, arresting the owners for selling rice above government prices. Unlike small business owners, major millers have significant political clout, with one of the largest being Dudley Sirisena, the president’s brother. The government must walk a careful line in order to ensure cooperation from millers and protect food security. President Sirisena finds himself in a difficult position, especially since he championed his outsider status during the 2015 elections to win the presidency; touting his hardworking attitude, degree in agriculture and origin from Sri Lanka’s north-central rice bowl. If the populace thinks Sirisena is not doing enough to combat the drought, or is bending to pressure from business, the likelihood of unrest will increase.

Concerns about the balance between business and public interest goes beyond rice milling, with MP Douglas Devananda warning against plans to relocate Coca Cola’s largest South Asian plant from India to Sri Lanka. Devananda has cited water-related complaints against Coca Cola’s 57 Indian bottling operations, including the fact that the company has been banned from drawing from the Thamirabaran river.

“With such [drought] conditions prevailing in Sri Lanka, Coca Cola wants to use our water resources to meet the demands of their largest consumer market in the region: India. How can this be allowed?” Devananda complained in parliament on February 24th.

The drought has also led to an energy crisis in Sri Lanka, as reservoirs are only at 29% capacity. As a result hydro-electricity generating rates are only 30% of installed capacity, a major problem for a country that relies on hydro-power for around 40% of total production. This forced state-owned utilities to purchase $50 million worth of electricity from the private sector in January and increase fuel imports: oil imports doubled in January alone. Increased fuel imports have further widened the trade deficit which has grown to $957 million (December 2016) up from $827 million in 2015. This is yet another financial drain on Sri Lanka and contributes to the rupee’s continuing devaluation. The rupee has already lost 1% in 2017, following a 3.9% drop in 2016 and 10% fall in 2015.

The rupee’s devaluation combined with increased imports and other drought effects saw consumer price inflation hit a record high of 6.8% in February compared to the same period in 2016. Dwindling foreign reserves threaten balance-of-payments pressure from foreign outflows at a time when Sri Lanka is negotiating up to $2.5 billion in foreign financing.

Overall the effects of the drought have already lowered the 2017 GDP growth forecast from 6% to 5%. Direct government actions against the drought could cost $264 million, with state minister for finance Lakshman Yapa Abeywardena stating that the government may need around $1.5 billion for drought contingencies. By way of comparison the entire national budget for 2016 was $5.5 billion. The effects of the drought have derailed Sri Lanka’s efforts to tackle systemic overspending, with the government projecting a 17% increase in spending, versus a 0.6% increase in 2016.

With a budget deficit of 7.4% of GDP in 2015, Sri Lanka was already facing serious fiscal headwinds, as the country’s inability to rein in government spending undermines its financial stability. As a result the drought is hampering Sri Lanka’s efforts to reduce the budget deficit to 4.6% – a key goal of the country’s $1.5 billion IMF loan. With fiscal deficit calculated at 5.2% for 2017, Sri Lanka faces a credit downgrade if it fails to meet its loan conditions.

In response, finance minister Ravi Karunanayake countered that “we have drafted the budget factoring in these uncertainties […] The budget deficit doesn’t need to swell up just because of one abnormal condition.” The minister went on state he expects 6% growth despite the drought and that the government is not considering a waiver on the IMF’s deficit target. International observers are less optimistic, with Moody’s warning of the “negative credit effect of the drought” and assigning Sri Lanka a B1 credit rating with negative outlook.

As originally appears at: http://globalriskinsights.com/2017/03/under-the-radar-sri-lankas-drought/

Sri Lanka: How An Unconstitutional Coup Is Becoming an Unprecedented Threat to Asia’s Oldest Democracy