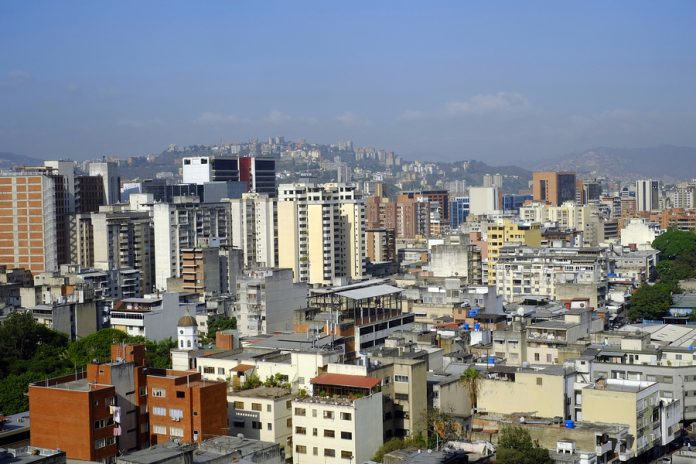 The Venezuelan government is living on borrowed time. The embattled United Socialist Party of Venezuela (PSUV) government faces increased pressure from all directions to relinquish power and allow free elections. Popular street protests and government opposition have created volatile internal pressure while criticisms from the international community are now exerting external pressure on the current government.

Caught in the middle of these two forces is Nicolas Maduro, – Hugo Chavez’ hand-picked successor and Venezuelan President since Chavez’ death in 2013 – who has been the centerpiece of anti-government sentiments shuddering through the country. With a growing list of international critics, many assume that the collapse of the Venezuelan government is only a matter of time. While many stand to gain from this collapse – the Venezuelan people, chief among them – there are those on the international stage that stand to lose out if the PSUV is shunted from power. Venezuela has been at the crux of some regional integration efforts, centered on the country’s relationship with Cuba. Allies and critics alike stand to suffer from a volatile regime change, but Nicaragua, El Salvador, and various Caribbean countries are at highest risk for the potential collapse’s economic knock-on effects.

Under Chavez, Venezuela built substantial international ties to become one of Latin America’s most interconnected economies. Venezuela boasts membership to various treaties, agreements, and regional integration efforts such as the Organization of American States (OAS), the Common Market of the South (Mercosur), Organization of Petroleum-Exporting Countries (OPEC), and the Community of Latin American and Caribbean States (CELAC). Of these, the most relevant to the current political crisis is the Venezuela-centric alternative to the Free Trade Area of the Americas (FTAA), the Bolivarian Alliance for the Peoples of our America (ALBA).

Venezuela is the linchpin of ALBA, an 11-member organization comprising Venezuela, Nicaragua, Ecuador, Cuba, Bolivia, Antigua and Barbuda, Dominica, Grenada, Saint Kitts and Nevis, Saint Lucia, and St. Vincent and the Grenadines. The organization is dedicated to economic, social, and political integration amongst its members through a common adherence to the ‘Bolivarian’ ideology of Simon Bolivar – for whom Chavez named his revolution and the group. One of ALBA’s most prominent initiatives is PetroCaribe, a program by which Venezuela provides energy-assistance to Caribbean and Central American countries by selling them oil at below-market prices. Originally a 2005 agreement between Venezuela and Cuba, the program has now ballooned to 14 countries, including Nicaragua and El Salvador.

Throughout this crisis, the Venezuelan government has maintained its subsidized oil exports to these countries in an effort to retain them in their camp, should a vote be held in the OAS to move against he Venezuelan government. However, the pressure mounting against Maduro and the PSUV signals that a regime change is imminent. ALBA’s largest members – Ecuador, Cuba, and Bolivia – have all begun positioning themselves for this collapse. While still maintaining political ties with the country, they have sought out new international relationships to bolster their position in the event of a Venezuelan collapse. Cuba and Bolivia seem to be best positioned as both entertain rapprochements with longstanding rivals – the United States for the former, and Chile for the latter. Ecuador, breaking ranks with a recent OPEC agreement, has opted to increase oil output to solidify its own position as commodity exports are sluggish to recover.

Nicaragua, El Salvador, and the Caribbean countries, however, rely heavily on the savings from Venezuela’s subsidized oil. With economies heavily reliant on remittances from the United States, oil subsidies account for significant portions of their GDP as these countries import an estimated 5000-6000 barrels per day. A regime change – whether volatile or measured in nature – would most certainly see an end to the PetroCaribe initiative, if not ALBA, altogether. A new government would most likely put an end to a policy that is seen, by some, as reckless and destructive; which would be the start of regional contagion. Nicaraguan President, Daniel Ortega, and Salvadorian President, Salvador Sanchez Ceren, are both staunch leftists and former guerillas who identified with Chavez and the PSUV on ideological level. While this was effective in forging a deep-seated relationship between the leaders, it also made both Central American governments dependent on the Venezuelan regime.

Unlike the larger members of ALBA and PetroCaribe, these two countries do not have the facility to maneuver themselves into a more favourable position. This will most likely lead to economic decay and political unrest; not unlike that currently afflicting Venezuela. The same can be said for many Caribbean members of PetroCaribe, whose economic composition relies heavily on remittance payments and Venezuelan fuel subsidies. But regional integration efforts in the Caribbean Community (CARICOM) ensure that these members are slightly more insulated than Nicaragua and El Salvador. While the two countries could follow Cuba’s lead and try to align themselves with the United States, they lack the strategic value that has allowed Cuba to overcome its public criticism of the US government.

Another option is to steer towards a Mexican sphere of influence, but with the current renegotiations of the North American Free Trade Agreement (NAFTA), Mexico is in no possession to sponsor smaller economies. Thus, a drastic regime change would most likely result in political volatility in both Nicaragua and El Salvador – both countries with a bloodied history of civil war. While the result may not be as drastic as the infighting in the past, or the current upheaval in Venezuela, the effects will be long and deep as both countries adjust to a new normal of market oil prices.

Crisis in a Nutshell

The political crisis currently gripping Venezuela can be traced to two factors: the death of former President Hugo Chavez; and the 2014 collapse in oil prices. This combination of governmental mismanagement and external economic forces set the stage for the crisis now plaguing Venezuela. Having built a personality cult around himself, Hugo Chavez was lauded by the Venezuelan people and the Latin American left. His redistributive economic and social policies saw millions in Venezuela pulled out of abject poverty through such mechanisms as price controls and overarching subsidies. As recompense, Chavez enjoyed almost unilateral support from the Venezuelan electorate and retained the presidency from 1999 until his death in 2013.

Chavez’ hand-picked successor, Nicolas Maduro, took office immediately after his death and narrowly won a snap election against opposition leader Henrique Capriles in 2014. While protests ensued and opposition parties contested his legitimacy, Maduro promptly took office with the promise that he would continue Chavez’ Bolivarian Revolution in his stead. Unfortunately, Maduro did not command the same popularity, presence, or deft touch as Chavez, and he quickly fell afoul of many within the country.

The trouble started in late 2014 when oil prices plummeted from $111/barrel to a low of $27/barrel. This caused an existential crisis for the Venezuelan government as oil exports account for anywhere between 90-95% of the Venezuelan economy. This came about under the Chavez years when the country grew fat on record oil prices; causing a reversal of the country’s economic diversification and liberalization. The drop in oil revenue meant an end to many of the subsidies that won the PSUV election after election. To counter the effects of reduced growth, President Maduro tightened the country’s price controls on consumer goods.

However, the prices were often set far below the production costs of suppliers and, soon, many companies suspended sales to Venezuela. Shortages of basic goods (a scarcity of toilet paper is the most infamous example) and skyrocketing inflation have now made life increasingly painful for average Venezuelans who often line up for hours only to find empty supermarket shelves. The pain felt by Venezuelans quickly turned to rage and the upheaval that stands to wrest power from Nicolas Maduro and the PSUV.