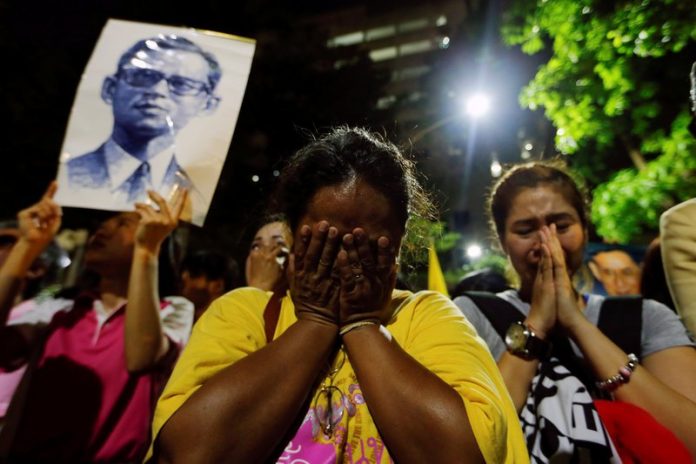 The death of Thailand’s King Bhumibol Adulyadej was not unexpected, as the 88-year-old monarch had been in poor health for some time, but it was nonetheless a shock to his people and you can see the grief and anguish on their faces. I had lived in Thailand many years ago, and was personally saddened to hear of his passing and know how highly revered he was there. While his political power was limited, Bhumibol was not only seen as a stabilizing force but was, in fact, a very important influence on the military, bureaucracy and all other segments of the society, helping to ensure stability over his 70-year reign, which spanned many changes—and at times turmoil—not only in Thailand but throughout the world.

When concerns about Bhumibol’s health began to intensify, the Thai equity market and its currency, the baht, also began to suffer. As the world’s longest-reigning monarch and given the overwhelming emotional ties the Thai people have with him, the ramifications of a royal succession have been a source of uncertainty in Thailand for a number of years, although it is expected that Crown Prince Maha Vajiralongkorn will succeed his father in due course. I think it will take time for people to get used to the change, and while the prince doesn’t have the same stature his father had, hopefully the prince will be able to step in and help Thailand move forward in a positive direction. One thing we do know is that there is a very dynamic and changing situation in Thailand right now. The country has been prone to coups, and has been under military rule since the one that occurred in 2014. Thailand’s general election is coming up in 2017, so we could see some significant changes ahead, and investors need to be prepared for that—and also for market volatility.

Thailand’s equity market has reacted negatively to the current uncertainty, with concerns centered on possible instability due to conflicts of interest between different groups in the aftermath of a succession, including potential terrorist plots. There are also concerns that in the aftermath of a succession—following a national mourning period—political differences could again re-emerge in Thailand that have in the past been destabilizing. However, in our view, the backdrop to a royal succession has improved drastically in recent years, with competing street protests long since passed and a new constitution approved by the electorate. The military government remains in power to oversee any succession as well as the 2017 elections. Security across the country appears to be tight.

In general, we remain constructive on the macro situation in Thailand. Large banks there look attractive to us, as growth has been reflected in the latest quarterly earnings reports and valuations appear reasonable.

Despite the market volatility we have seen so far, it is worth noting that the Stock Exchange of Thailand generally is higher than its 2016 lows, and the baht remains above its lows seen in early 2016.1 In the short term, we think the power transition in Thailand is likely to affect specific areas of the economy. A period of national mourning would be expected to impact the media and entertainment industries, for example, and there could be secondary impacts on tourism. Uncertainty relating to the monarchy has been a long-running concern of both domestic and foreign investors; accordingly, many market participants have excess holdings of cash that may act as a spur to the market as these fears pass with a succession. In addition, Thailand’s government is embarking upon an ambitious long-term growth agenda in its recent five-year plan, with a focus on infrastructure spending, both directly from public funds as well as through state enterprises executing projects, aided by debt and public-private partnerships.

Beyond weak near-term sentiment, the structural drivers in Thailand—from a macroeconomic perspective as well as the country’s bottom-up stock fundamentals—remain attractive to us. A reduction in longer-term uncertainty should prove positive for the Thai market. We view Thailand’s low fiscal deficit of 3% as providing room for further stimulus spending if required. Additionally, the substantial current account surplus (above 12% of gross domestic product) should be supportive of the currency and place Thailand in a strong position to benefit from a potential recovery in global trade.

We think these factors, alongside the typical boost to spending that usually accompanies elections, are likely to have a far greater effect on Thailand’s overall economic growth than the current short-term uncertainty. I also think it’s very important to point out that while there remains potential for political friction, Thailand has a long history of rebounding from difficulties, demonstrating both the resilience of its people and economy as well as the competence of its bureaucracy. Recent events do not fundamentally alter our positive outlook toward the country as a whole.

Mark Mobius’s comments, opinions and analyses are for informational purposes only and should not be considered individual investment advice or recommendations to invest in any security or to adopt any investment strategy. Because market and economic conditions are subject to rapid change, comments, opinions and analyses are rendered as of the date of the posting and may change without notice. The material is not intended as a complete analysis of every material fact regarding any country, region, market, industry, investment or strategy.

All investments involve risks, including the possible loss of principal. Investments in foreign securities involve special risks including currency fluctuations, economic instability and political developments. Investments in emerging markets, of which frontier markets are a subset, involve heightened risks related to the same factors, in addition to those associated with these markets’ smaller size, lesser liquidity and lack of established legal, political, business and social frameworks to support securities markets. Because these frameworks are typically even less developed in frontier markets, as well as various factors including the increased potential for extreme price volatility, illiquidity, trade barriers and exchange controls, the risks associated with emerging markets are magnified in frontier markets. Stock prices fluctuate, sometimes rapidly and dramatically, due to factors affecting individual companies, particular industries or sectors, or general market conditions.

1. Past performance is not an indicator or a guarantee of future performance.