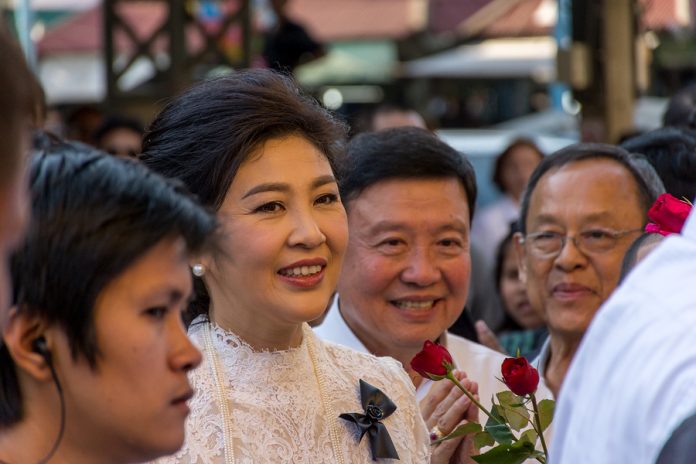 The other day, it was to be a judgment day for former Prime Minister Yingluck Shinawatra.

Throughout the past few months, Thailand’s political temperature has been rising following the heated court case of Yingluck, who is accused of mismanaging Thailand’s rice subsidy program. The Supreme Court, on August 25, was supposed to deliver the final verdict in the criminal case against the former premier. But Yingluck left everyone surprised by not turning up at the court, citing her sudden illness.

The court immediately issued a warrant for her arrest, reasoning that there was the chance that she might run away. Indeed, there had been talk that she might have already fled Thailand, possibly to Dubai to be with her brother, ousted former prime minister, Thaksin.

Prior to the so-called judgment day, all sides of the political divide employed a number of tactics in what is seen as an acrimonious apolitical showdown at this critical royal transition. The reason of her not coming to court could be because she might have known her fate – being found guilty of negligence over her role in the scheme. As a result, she could be imprisoned for up to 10 years. In the period leading up to the ruling, the Justice Ministry already froze some of Yingluck’s bank accounts and confiscated some of her assets to guarantee payment of a $1 billion fine imposed by the military government over her government’s program.

Yingluck won a landslide victory in the 2011 election, riding on her party’s populist platform inherited from the government of her brother, Thaksin, who had been in power from 2001 to 2006. Thaksin implemented policies designed to empower rural residents of the north and northeast regions. They subsequently served as strong power bases for Thaksin’s party. Yingluck initiated the rice-pledging scheme, which resulted in purchasing rice from farmers at above-market rates, distorting global prices. This proved highly popular among her supporters in the rural provinces.

Two Shinawatra prime ministers have now been ultimately overthrown in military coup. The current military regime of General Prayuth Chan-ocha was determined to prosecute Yingluck to attest that the coup against her was legitimate. For the junta, putting Yingluck on trial was basically putting itself on trial too. Given this, many Thais expected the outcome to go against her.

Why must she be eliminated from Thai political life at this point in time?

The political elites are increasingly concerned about their position of power now that King Bhumibol Adulyadej, who passed away last October, is no longer on the political scene. Under Bhumibol, their political interests were firmly secured through the monarchy network, which had dominated political life for decades. Without Bhumibol, Thailand has moved into an uncertain phase under the new controversial king, Vajiralongkorn. Those political elites fear that the Shinawatras might exploit political uncertainties to regain power.

Yingluck may have been looked down on as a mere Thaksin puppet. But she earned some political credit while serving as prime minister and became even more popular after she was toppled in the 2014 coup. Being the first female premier helped augment her political status. She came across as a genuine politician, composed and compromising — qualities that separate her from her more assertive brother.

Since the coup, Yingluck has been attacked by her enemies through several court cases. They accused her of corruption in the rice scheme. They are now also investigating possible illegalities in her government’s US$60 million compensation fund for the Red Shirts (opposition party, historically connected to Thaksin) that were tied to those killed in the brutal crackdowns in 2010. A planned string of aggressive prosecutions against Yingluck was clearly designed to terminate her political career once and for all.

Earlier, Yingluck showed no sign of giving it up. She continued to travel extensively within the country to meet her supporters. Everywhere she visited, enthusiastic crowds greeted her. This political connection between Yingluck and her supporters could be put to good use had she been imprisoned. Her diehard fans were willing to defy the junta by rallying to show their support for her on Friday.

Last month, Yingluck herself openly acknowledged her need for public support, writing on her Facebook page, “I would like to transform your moral support into a power that would make me strong and tolerant.” Little did they know then that she would choose to run away from Thai “law.”

Nobody knows what will happen next. Yingluck could end up being like Thaksin, unable to return home for the foreseeable future. But this does not necessarily mean the end of her political career. Already her supporters are comparing her with Myanmar pro-democracy leader Aung San Suu Kyi, who had to live under house arrest for 14 years over a 20-year period. Suu Kyi’s incarceration earned her the title of a democratic icon and she became the symbol of struggle against Myanmar’s military rule.

But comparing Yingluck with Suu Kyi is problematic. Yingluck was also criticized for buying loyalty from her supporters through populism during her premiership without seriously addressing critical hurdles in democratization. For example, Yingluck shied away from dealing with the gnawing problem of lese majeste cases, which perpetuated a huge negative impact on human rights and political debate. Her government had also proposed a controversial blanket amnesty that sparked months of anti-Yingluck demonstrations that led to the coup.

This blanket amnesty would have set her brother. among others on both sides of the political lie, free from all pending charges. The ploy even infuriated some quarters of the Red Shirts; they felt the deaths of their comrades would be sacrificed for Thaksin’s freedom.

If Yinglick has really fled Thailand, the military may have won this game. Without having to punish Yingluck in a court, the military might just avoid upsetting the red shirts. This would also please the Shinawatra enemies in the upper and middle classes. They perceive the Shinawatra family as the prime threat to their political well-being. Now that she is gone, they can fully reclaim their political power.

The case against Yingluck is not merely a case against one of the country’s most popular prime ministers, it also underscores the politicization of the judiciary. Yingluck’s disappearance signals the lack an independent judicial system. Thailand’s road toward peace and reconciliation is likely to be rocky, even if today, Yingluck is no longer around.