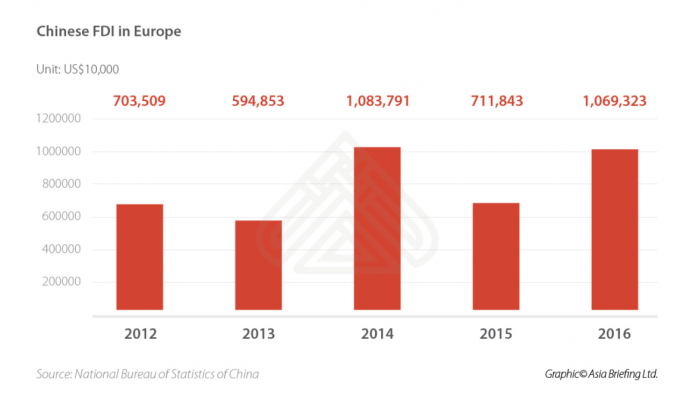 French President Emmanuel Macron and UK Prime Minister Theresa May both made trips to China in early 2018. During their visits, they expressed interest in the opportunities presented by China’s Belt and Road Initiative (BRI), but also reluctance over the policy’s aims and whether European countries could really benefit from it. Macron, for instance, said that the New Silk Road cannot be “one-way”.

Given the importance that the Chinese government has ascribed to the BRI – and the vast sums committed to it – European businesses are exploring if and how they can participate. However, many European businesses are unsure of what the BRI looks like in practice, and whether the opportunities it presents can only be enjoyed Chinese companies.

While the exact nature of foreign involvement in the BRI remains elusive, a closer look at the policy and on-the-ground developments show that there are a number of ways for European companies to get involved.

The BRI is a major international development strategy launched by the Chinese government, and is widely considered President Xi Jinping’s signature foreign policyproject.

At its core, the BRI aims to connect Asia, Europe, and Africa by building physical infrastructure and new trade routes with around 70 participating countries.

The BRI has five major objectives for linking China with participating countries:

For China, the BRI is a new vehicle to enhance its policy of all-around opening and for directing overseas direct investment (ODI). For European countries, the BRI is an opportunity to access new markets and attract more investment.

European countries play a key role in the geographic layout of the BRI. Just like the ancient Silk Road, the BRI and its “21st Century Maritime Silk Road” – the oceanic component of the BRI – build trade routes from China that extend all the way to Europe.

One of the main goals of the BRI is to connect China and the East Asian economic circle with the EU. Under the framework of BRI, China and Europe will build new international economic corridors – such as the “New Eurasia Land Bridge” – to decrease trade costs and promote cross-regional cooperation.

To achieve the goals of connectivity and development along the BRI, China has already invested billions of dollars in the form of foreign direct investment (FDI) and development funds.

For example, China invested US$14.43 billion in 53 BRI countries in 2016, mostly in tourism, public services, infrastructure, real estate, technology, and entertainment industries. It has also committed US$40 billion to set up the Silk Road Fund, which is a state-owned fund for investment in countries along the BRI.

Much of China’s BRI investments are devoted to hard infrastructure investments, particularly in transportation infrastructure and power generation. To improve the connectivity between China and BRI countries, railways, highways, and ports need to be developed to handle the increased traffic expected to arise from the BRI.

For instance, the Eurasian Railway Program plans to build 81,000 km of railway lines for moving freight and passengers overland between China and Europe. This is an important project for connecting national boundaries in BRI countries and developing regional integration.

In addition to transportation infrastructure, many BRI countries are in need of investment in basic facilities and infrastructure more broadly. This is particularly the case for some Central Asian countries that have historically struggled to attract investment.

Much of this infrastructure aims to accelerate power generation and resource extraction. BRI countries hold more than 50 percent of the world’s potential oil supply and 70 percent of its gas supply. Already, more than 40 energy projects have begun and a further 20 projects agreed upon.

Beyond infrastructure and trade, the BRI seeks to develop people-to-people exchanges through the culture and tourism industries, by capitalizing on the history and legacy of the ancient Silk Road.

How European businesses can participate

China has ambitious plans to develop the BRI region. But how can European companies capitalize on these investments?

There are a number of ways European companies can benefit, either directly or indirectly.

Next, lower transportation costs. As a result of improved infrastructure, European companies will be able to benefit from lower costs and faster transportation times if they want to sell products to BRI countries.

For example, the Chongqing-Duisburg railway line built in 2016 can reduce transportation time between the two cities by 12-13 days. For international trading companies in Europe, this is highly beneficial to expand their businesses in China.

Finally, as the end point of several major BRI trade routes, European businesses can directly receive significant investments from Chinese entities. In Greece, for instance, the China Ocean Shipping Group purchased 67 percent equity of Piraeus Port Bureau, which created a new route that shortened transportation from China to Europe by seven to 11 days.

Most of China’s investments in Europe are either mergers and acquisitions (M&A) or Greenfield investments. European companies participating in the BRI may attract Chinese investment if they can strengthen their cooperation with Chinese companies.

Risks posed by the BRI

The capital and investment projects emerging from the BRI produce a range of opportunities for European companies. However, they also face significant risks in participating in the BRI.

Many commentators have speculated that the BRI is primarily aimed at finding new markets for China’s industrial overcapacity and extending China’s international influence. Chinese companies, including SOEs, appear to be playing an outsized role in the BRI thus far, and it may be difficult for European companies to compete with them.

Additionally, many countries included in the BRI pose security risks, particularly for hard infrastructure projects. Political instability and extremist and secessionist movements could result in economic losses and physical danger to employees.

A large number of these countries are also risky investment destinations for purely economic reasons. At least 27 BRI countries are rated as junk or below investment grade by international rating firms.

The economic environment can be challenging in other ways as well. For example, several BRI countries have prohibitive duties for cross-border trade, making trade more costly and challenging.

Finally, European companies should be sensitive to the BRI region’s incredibly diverse assortment of cultures, religions, and ethnicities, as well as the political histories between their countries. Such awareness can be the difference between success and failure when expanding into new markets.

The BRI is relatively young, and many aspects of the policy remain unclear – particularly concerning the role Western businesses will play. Independent of policy details, companies also face a variety of risks when doing business with many BRI countries.

European companies involved in trade, logistics, and infrastructure development, however, have several ways to participate in BRI. Whether directly participating in infrastructure development initiatives or benefiting tangentially as a result of new trade routes, the BRI offers opportunities for a range of different businesses. With the Chinese government’s increasing investments and political determination, the BRI is opening new opportunities that cannot be ignored.