Bill Gross never fails to draw investor attention to central banks and the size of their balance sheets.

“The expansion of central bank balance sheets from perhaps $2 trillion in 2003 to a now gargantuan $12 trillion at the end of 2016 is remarkable,” said Gross of Janus Capital (JNS) in his Investment Outlook for February. 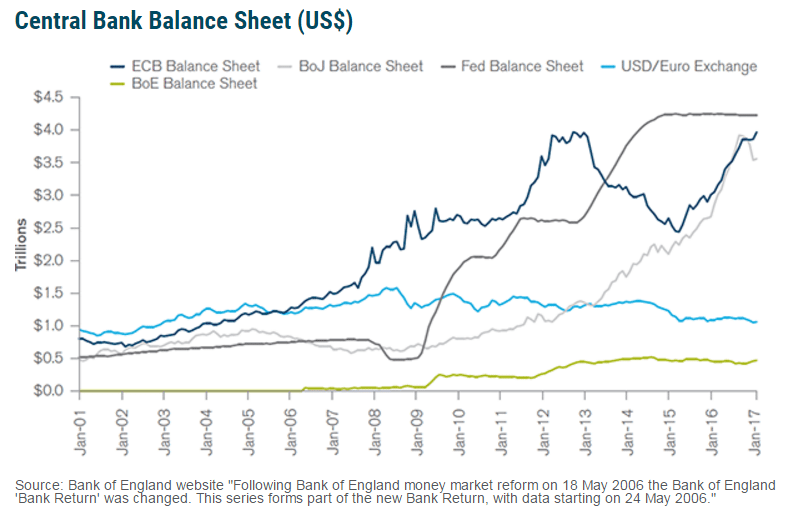 “Not only did central banks buy $10 trillion of bonds, but they lowered policy rates to near 0% and in some cases, negative yields. All of this took place to save our ‘finance-based economy’ and to raise asset prices upon which that model depends.” Now, Gross has for a while now, been directing investor attention to the artificial inflation in asset prices that has been caused by the Fed’s ZIRP (zero interest rate policy). Lower and lower interest rates lead to more and more elevated levels of prices; as price remains a function of future cash flows discounted at an appropriate cost of capital.

Moreover, the lower cost of capital which should have been used to boost investments and hence, productivity, was instead used primarily for buybacks and M&A deals. So the central bankers’ lower rates and quantitative easing regime in effect:

Since the world economy (ACWI) (VTI) has reached a point where a pull-back now could lead to a major economic plunge, central bankers may see themselves trapped in a QE-forever cycle.