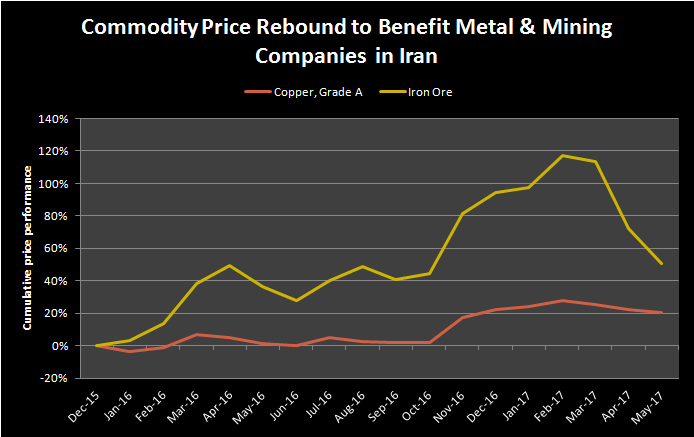 This is post 4 of 4 in the series “On The Ground Perspective: Iranian Stock Market and the Looming Banking Crisis”

Commodities exporters are poised to gain on metal price recovery

Most Iranian stocks (GULF) (MES) are sensitive to commodity (DBC) prices as 75% of the exports of listed companies are currently owned by mineral fuels (including oil). Over the past 6 years, Iran’s export sales of iron and steel have risen by 50.5%, while ores, slag and ash sales expanded by 28.2% led by copper (CPER), chromium, lead and zinc ores and concentrates. Within this period, we’ve seen commodity prices get battered severely (2014-15). However, since January 2016, we’ve seen metal prices recover. Iron ore is up about 50% in price, while copper is up over 25%. This is particularly good for commodity exporting companies, and if the trend continues upwards, metals and mining companies should offer good gains.

Iranian stocks that may hold potential for 2017

During a recent discussion with Frontera, Agah Group’s Head of Equity, Behrad Ebrahimi, shared his views on companies within Iran’s commodity sector that may be attractive to investors. Companies such as Isfahan Mubaraka Steel (EXCH: FOLD1) within the metals industry, as well as Gol-e-Gohar Iron Ore Co.  (EXCH: GOLG1) and Chadormalu Mining and Industrial (EXCH: CHML1) from the mining industry were noted as being particularly well placed.

While oil and gas companies dominate Iran, Behrad strayed from highlighting any particular names in this sector. From a commodity sector perspective, he sees metal companies’ stocks holding greater value than petrochemicals. The reason behind is that there are uncertainties surrounding petrochemicals and oil related industries. “When it comes to oil prices, a lot depends on what will come out of the current situation in Qatar,” Behrad told Frontera. We have to wait and see whether other Persian Gulf countries will join the boycott and if they joined, we shall seek the answer to what that will mean for the oil price.

That said, Iran is the only (OPEC Organization of the Petroleum Exporting Countries) member with room for production growth when it comes to energy. And, major European companies are already on track to make gains from Iran’s post-sanctions environment. The country recently signed its first agreement with foreign energy companies in over 10 years. A consortium of energy firms led by French energy company, Total (TOT) (50.1% stake), signed a 20-year $4.8 billion upstream contract to help develop parts of the giant South Pars natural gas field in Iran. Other members of the consortium included China National Petroleum Corp. and Petropars Ltd. (19.9% stake), a subsidiary of the state-run National Iranian Oil Co.

This is post 4 of 4 in the series “On The Ground Perspective: Iranian Stock Market and the Looming Banking Crisis”