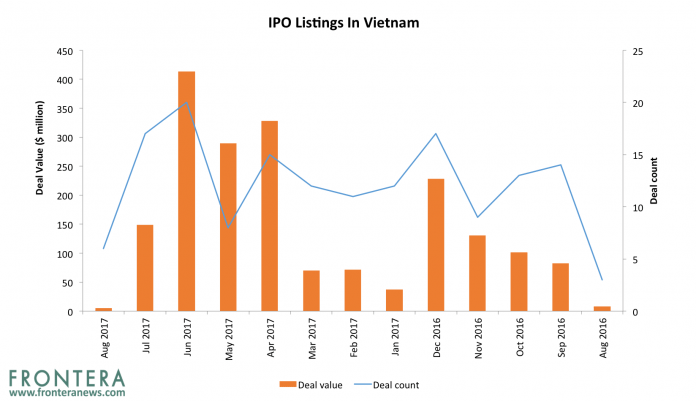 This is post 1 of 1 in the series “Vietnam's IPO Market Is Picking Up; Should Investors Pay Heed?”

In the past one year, 157 share issues (including rights issues, FPOs, and IPOs) have been announced in Vietnam, for an aggregate deal value of $1.9 billion. Of these, 43% of deals were from the industrial sector, while 23% of them were by financial firms.  Vietnam stock markets have witnessed only 5 IPOs listings in the first half of 2017 and the government has set forward an ambitious target to privatise 39 companies during the rest of 2017. By 2020, the Vietnamese government aims to divest stakes in 137 state-owned companies through IPOs. The country’s remaining divestment portfolio includes three subsidiaries of PetroVietnam, Vietnam’s leading oil company and a $1.1 billion (VND 24 trillion) unit of Vietnam Electricity. As per government sources reported by DealStreetAsia, 20 companies slotted to be divested are currently undergoing valuations, while 14 are in the process of finalising their pricing.

Thien Bui, market strategist at Viet Dragon Securities Company stated, “If the processes are as reported, though it is an ambitious plan, we still expect that the government will achieve its plan. Moreover, we look forward to ‘key’ deals such as Binh Son Refinery, PV Oil, and Idico, which can attract investors.”

Deals that are expected to close by end of 2017 include divestments of Vinamilk (VNM), subsidiaries of PetroVietnam, and brewers Sabeco and Habeco. The government is planning to sell-off its entire 82% stake in Habeco, while its stake in Sabeco will likely be divested in two phases of 54% and 36%. Vietnamese IPOs have been criticized in the past due to the tiny stake typically made available in public offerings. Now, government-owned companies are offering controlling or substantial minority stakes to strategic investors. Companies like PV Oil, Binh Son Refinery and Petrochemical have been negotiating with large companies from Russia, Middle East and Asia for sales of their stakes. Meanwhile, energy firm PV Power’s IPO has garnered substantial interest from large investment corporations such as BNP Paribas (BNP.TI), Standard Chartered (STAN.L), SembCorp (U96.SI), GIC, Nexif, and Keppel Infrastructure (KPLIF). Binh Son Refinery’s IPO is also slated to debut in November this year, while PV Power aims to raise $600-700 million through an IPO listing later in August.

This is post 1 of 1 in the series “Vietnam's IPO Market Is Picking Up; Should Investors Pay Heed?”