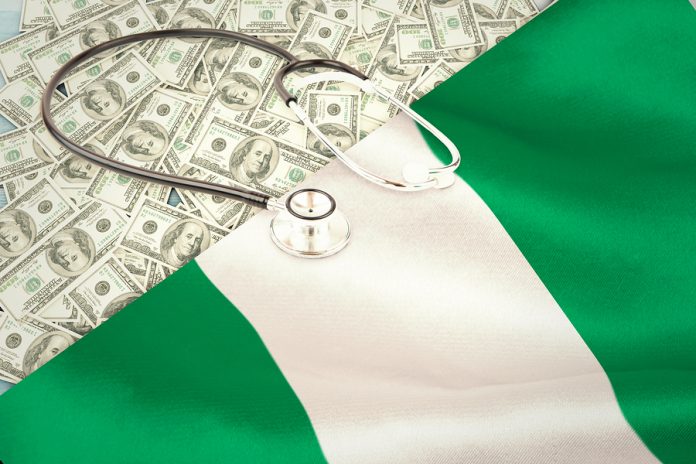 Nigeria: amongst the largest recipients of US aid

The US is the biggest financial aid provider to humanitarian crises across the globe. The country donated around $6.4 billion or 29% of the total spent globally for emergencies, in 2016, according to a spokesman for the UN’s Office for the Coordination of Humanitarian Affairs, as reported by CNN. 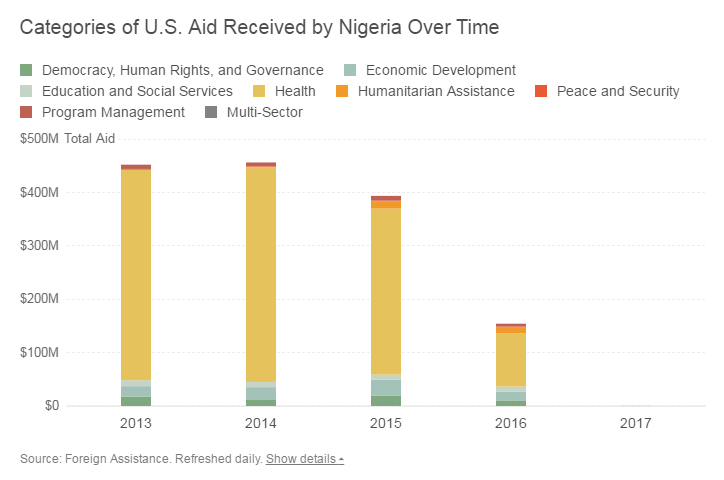 However, as part of its budget overhaul, the Trump administration is set to implement staged cuts in its aid, over several years. The news is set to affect Africa’s (EZA) (AFK) (GAF) most populated nation, Nigeria, which happens to be one of the largest recipients of US aid. Afghanistan, Syria, Jordan, Kenya, South Sudan, and Ethiopia count amongst the other large receipts of US aid, as of 2016. 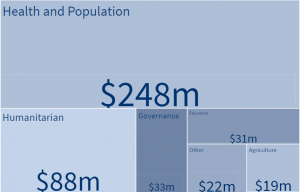 Now, of the aid received by Nigeria, a major portion goes towards healthcare. Looking at the total $444 million aid provided by the USAID agencies to Nigeria in 2016, $248 (55.86%) million was allocated towards health and population.

Now, with the Trump administration seeking to cut the country’s aid Nigeria could see its healthcare situation getting hit.  Moreover, the proposed cut is coming at a time when Nigeria is on the brink of a famine.

The urgency in Nigeria

According to the United Nations, presently the world (ACWI) (VTI) has over 20 million people in four frontier (FRN) (FM) nations  — Somalia, South Sudan, Nigeria, and Yemen that are on the brink of famine. In Nigeria, the militant Islamist group, Boko Haram, has plagued country’s northeast region which was already struggling with food shortages. The group is responsible for displacing about 1.8 million Nigerians and leading 4.7 million to survive on emergency food aid, according to the World Food Programme.

Combinations of famine, drought, and floods, have severely affected agriculture and sustenance in Nigeria. According to the UNICEF, Nearly half a million children under the age of 5 are now at risk of severe acute malnutrition, with nearly 20% starving to death if aid demands aren’t met.

Health NGOs to be affected

A number of healthcare non-governmental organizations in Nigeria currently run on US aid such as Action Against Hunger. Reflecting on the acute crisis in northeastern Nigeria which is fraught with soaring ­malnutrition rates and scores of people dying of preventable illnesses (courtesy Boko Haram), Yannick Pouchalan, the country director for Action Against Hunger, said, “if that aid stops, it means we won’t reach the people in need.”

The Trump administration’s new policy only spells doom for healthcare in Nigeria.