Vietnam: in the league to grab the emerging market status

Vietnam opening up its banking industry to more foreign capital may just be a stepping stone in its path to securing itself a place in the MSCI Emerging Markets index basket.  The economy currently commands a 7.61% weight in the MSCI Frontier Markets index and is making all attempts to graduate to the emerging market (EEM) (VWO) status.

The latest effort in this regard has been the decision to raise the foreign ownership limit or FOL on its banks from the current 30%. The FOL decision, when through, should give a boost to banking stocks and Vietnam’s stock market (VNM) in general. 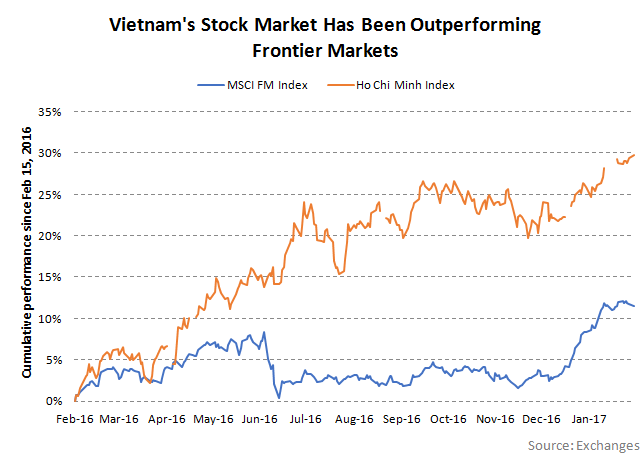 Vietnamese equity has returned 30% over a year

Vietnam’s stock market has been largely outperforming frontier markets (FRN) (FM) since last year. Over the past one year, Vietnam’s Ho Chi Minh Index has returned about 30%, while the broad MSCI Frontier Markets index has returned almost 12% (as charted above).

Stocks of companies such Tien Len Steel Corp JSC, SMC Investment Trading JSC, Vietnam – Italy Steel JSC, Nam Kim Steel JSC, and My Chau Printing and Packaging Holdings, are up over 200% over the past 1 year (as of February 14).

Liquidity remains one of the major factors; along with size and openness; behind a stock markets’ acceptance as an emerging market. By raising the FOL in its banks, Vietnam intends to invite liquidity into its economy. Currently, banks with room for foreign investments in Vietnam include BIDV, Vietcombank (VCB), Sacombank (STB), Saigon Hanoi Bank (SHB), Navibank (NVB), and Vietnam International Bank (VIB).