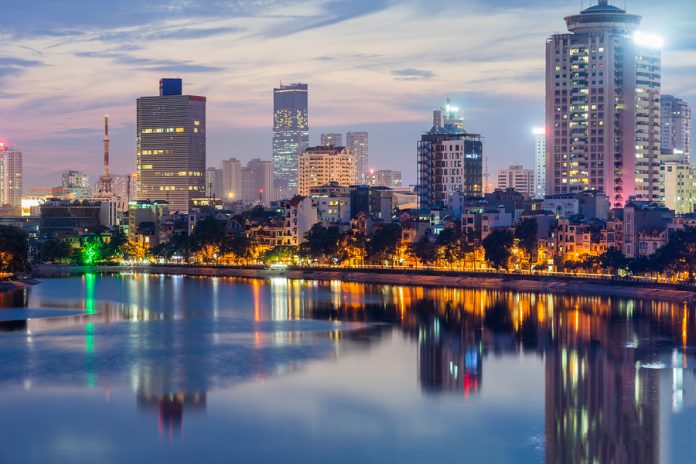 “VIETNAM IS THE ‘NEW CHINA’.” MANY OF US HAVE HEARD THAT phrase before and there is some truth to the statement. A war-ravaged and impoverished country just a few decades ago, Vietnam is associated less today with the Viet Cong tunnels, guerrilla warfare in steamy jungles, and Agent Orange than with humming factories, a swelling middleclass, and its emergence as the new export wonderchild of Asia.

Ever since the introduction of the doi moi (renovation and restructuring) economic reforms in 1986, Vietnam has been on a tear. Apart from a brief period of economic distress and financial volatility experienced from 2009 to 2012, the country has been a development posterchild with sustained gross domestic product (GDP) growth of approximately 6 per cent a year, and is now knocking on the doors of the middle-income club of economies. With a per capita GDP of around US$2,200, the Vietnamese are starting to experience a sustained consumption boom as disposable income is now large enough to kickstart a surge in discretionary spending on everything ranging from entertainment to cars and holidays.

In many ways, Vietnam is a microcosm of the classic Asian development story of recent decades—an erstwhile European colony that shrugs itself free of its oppressors and then turns deeply insular, suspicious of the West and its ideals, only to then emerge from its isolation as an economic tiger riding on the coattails of globalisation and free-trade.

But what makes Vietnam particularly special is that it could well be the last in a generation of Asian economies that have exported their way from rags to riches. Japan in the seventies, Korea and Taiwan in the eighties, Thailand and Malaysia in the nineties, and China in this century all rapidly ascended the economic ladder through exports of manufactured goods, primarily to the West. Low labour costs and foreign investment-friendly policies were the secret sauce, and as wages rose, these trading nations migrated up the value chain from low-end exports of garments, footwear and furniture to automotive parts and electronics. Some of these countries, like Japan and South Korea, went that extra mile to develop their own world class Original Equipment Manufacturer (OEM) brands, and became world renowned crucibles of technology innovation.

Vietnam has been treading in their footsteps—from exports of furniture and agricultural commodities a couple of decades back, it has become a favoured production hub for textiles and footwear, and is now dabbling seriously with electronics: Samsung has invested close to US$15 billion in factories in Vietnam and accounts for nearly a quarter of the country’s exports. Vietnam is now one of the world’s largest exporters of handsets as well as flat panel televisions—its rapid rise from exporting rice to assembling smart phones would have been inconceivable even ten years ago. A large and young workforce, solid primary education system and its proximity to China’s manufacturing heartland in the Pearl River Delta made Vietnam’s rapid ascendance as an export powerhouse possible. But as automation and robotics loom on the manufacturing horizon, one can’t help but wonder if Vietnam might be the last one to squeeze through the hallowed gates of upper middle-income-hood before offshored manufacturing becomes a relic of the past.

Regardless, Vietnam will be an important contributor to and beneficiary of the Asian Century. First, its highly strategic location and long coastline have already rendered it a geopolitical playground for superpowers. With China, on the one hand, and the United States, Japan, South Korea, and India, on the other, trying to cement their influence in Southeast Asia, Vietnam has been able to successfully play each side off against the other and, in the process, gained concessions from both. The Japanese have been funding the roll-out of hard infrastructure including a nationwide expressway network, and upgrades of airports and urban mass transit systems in Vietnam at a frenetic pace to secure it as the last bastion of Japanese influence in the region amid a sea of China-leaning regimes such as Cambodia, Laos, Malaysia—and more recently—the Philippines.

But to fund nearly half a trillion U.S. dollars of infrastructure investments needed over the next five to ten years, Vietnam is likely to turn to loans from the newly formed Asian Infrastructure Investment Bank (AIIB)—China’s response to the World Bank and the Asian Development Bank (ADB)—as the flow of overseas assistance from Japan and Western allies tempers in pace.

India, for its part, sees Vietnam as a vital piece in a complex regional chess game with China, and is tightening its relationship with the country as a response to China’s intrusion into its own South Asian backyard—“if you get into my backyard, I will get into yours” seems to be the message India is sending China by deploying its Akash and Brahmos missile systems in Vietnam, and providing training to the Vietnamese armed forces.

Secondly, with China having dominated global manufacturing for over two decades and, given its rising labour costs and economic re-orientation towards domestic consumption, Vietnam stands to benefit enormously. Despite all the talk of South Asia and Africa becoming the next manufacturing export hubs due to large and low-cost labour pools, one must remember the importance of staying plugged into China-centric supply chains. Samsung would not move its factories all the way to western India to assemble handsets for export around the world when several of the handset component suppliers are still in China. Given China’s migration into higher-end manufacturing, Chinese suppliers will only further grow their share of the supply of critical components across a whole array of manufactured wares. This will mean that assembly can never move that far away from China without compromising on supply chain responsiveness.

Enter Vietnam. With its long coastline hugging one of the most important maritime corridors of the world, and only a couple of days by ship away from the mega ports and transshipment hubs of Hong Kong and Singapore, Vietnam has an unparalleled advantage as a choice for factory relocation out of China. As China continues to migrate up the manufacturing value chain, this trend will continue, with Vietnam following in its wake, nibbling away at each stage as China becomes uncompetitive in industries, or stages of the value chain within industries, and moves up one notch at a time along the value chain. Vietnam’s sizeable and young labour force and good quality of basic education and numeracy will only help reinforce this trend.

China’s continued tilt towards domestic consumption presents another huge opportunity for Vietnam. With the country’s 1.3 billion consumers splashing out on a whole range of discretionary purchases, Vietnam’s location could become even more of an asset. Given its proximity to China, Vietnam is the natural choice for setting up factories to export goods into China. As Chinese consumption starts to overshadow consumption in the West, Vietnam could become the favored sourcing hub for a whole range of consumer product categories. This will provide a bulwark against growing protectionism in the West.

With a highly strategic location, a young population of nearly 100 million, a highly literate and numerate workforce, a vibrant consumer class with a demonstrated taste for adoption of new technology, Vietnam is likely to continue its pole-vault towards developed country status. As the country’s economy starts to matter in the region, so will its geopolitical significance.

Anirban Lahiri is a Founder and CEO at MediSetter.