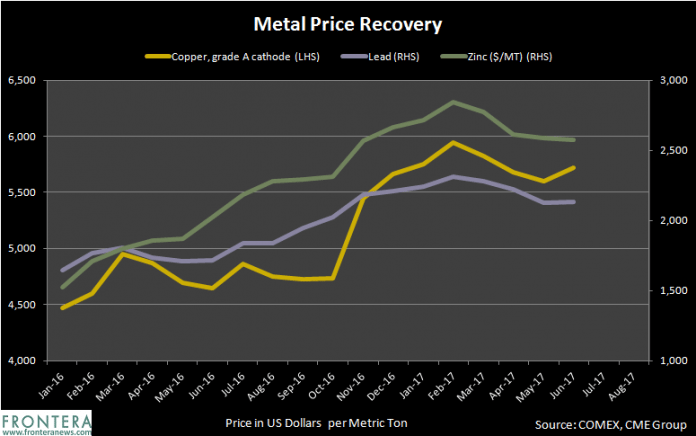 This is post 2 of 3 in the series “Could the Nurly Zhol – OBOR Blend Help Kazakhstan Top its Own FDI Record?”

Kazakhstan is the world’s largest producer of uranium (URA). It stands second in chromium production (after South Africa (EZA)) and also boasts a high level of availability and mining of lead, zinc, copper, petroleum, and other minerals. Being a landlocked nation, the country also enjoys the advantage of exporting directly to its neighbors such as China (FXI) and certain European countries via Russia (RSX). Over the past few months, Kazakhstan’s mining sector has been going quite well. The recovery seen in metal and mineral prices over the last few months (see chart above) has contributed significantly to the economy of Kazakhstan. Kazakhstan’s mining companies, including Kazakhmys, KAZ Minerals (up 72% YTD as of July 19), Kazzinc (a Glencore subsidiary), Syrymbet JSC, ShalkiyaZinc, JSC AK Altynalmas, have benefitted from the same. Copper-focused KAZ Minerals reported a 43% growth in revenues in 2016 over the previous year. The depreciation in the Kazakhstani currency, the tenge, has also helped reduce the average operational cost for certain metal producers. The past two years have seen the tenge depreciate by around 45% against the US dollar.

Meanwhile, Kazakhstani petroleum producer JSC National Company KazMunayGas (up 28% YTD as of July 19), has benefitted from the oil price recovery.

As the mining industry continues to attract investments into Kazakhstan, China’s Belt & Road Initiative is another big factor contributing to increased investment into this Central Asian (AAXJ) (VPL) economy.

This is post 2 of 3 in the series “Could the Nurly Zhol – OBOR Blend Help Kazakhstan Top its Own FDI Record?”