Emerging markets started 2017 fairly well considering ongoing concerns over the tightening of US monetary policy and the introduction of potential border taxes under the new Trump administration. 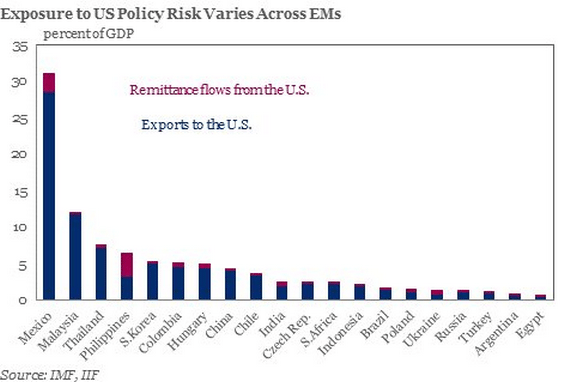 The graph above, originally published by the Institute of International Finance, shows which emerging markets are the most exposed to US policy risk measured by remittance flows from the US and exports to the US.

Twenty emerging markets are included, led by Mexico, which stands to be hurt the most if the US goes through with a move towards trade protectionism. It also illustrates China as being more exposed than India while Turkey, Argentina, and Egypt have the least to worry about.

In this series, we’ll look at the top seven emerging markets which have the most to lose assuming Uncle Sam begins to take a more conservative approach to bilateral trade.

Let’s begin our analysis with Mexico, the country that could suffer most severely if the US gets tougher on foreign trade.