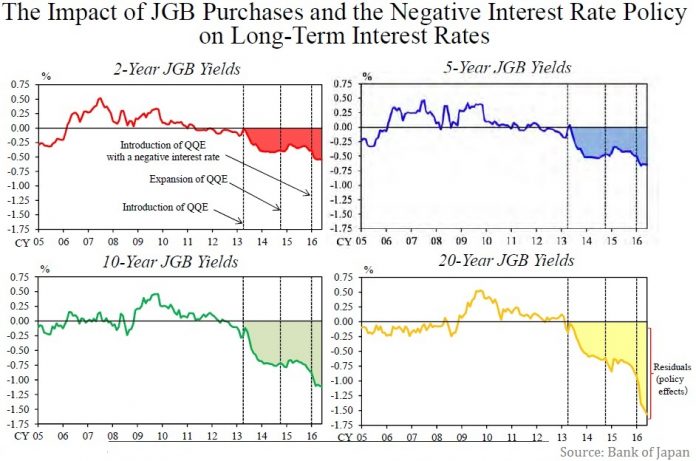 Earlier in this series, we spoke about the evolution of QE (quantitative easing) in Japan until the Bank of Japan had launched QQE (quantitative and qualitative monetary easing).

In September this year, it introduced a new policy framework christened QQE with yield curve control with the following two objectives:

The Bank of Japan studied the impact of QQE on yields of JGBs (Japanese Government Bonds) and found that they have fallen since the introduction of the QQE. The pace of this decline in yields gained momentum with the introduction of negative interest rates.

To put in practice the new framework, the Bank of Japan sets two interest rates – a short-term policy rate and an operating target for long-term interest rate. These two serve as guidelines for market operations. The short-term policy rate is -0.1%, the same as applied to policy-rate balances in current accounts held by financial institutions with the central bank. Meanwhile, the 10-year JGB (Japanese Government Bond) yield, set by the central bank, is the operating target for the long-term rate. The Bank intends to keep the rate at around 0%.

The other important feature of QQE with yield curve control is the inflation-overshooting commitment. Via it, the central bank intends to expand its monetary base until inflation goes over the target of 2%.

It is important to note that this overshooting commitment does not mean an increase in their price stability target. It only means that observed inflation should be around 2% over a business cycle, implying that there can be times when inflation is above 2%.

Though exports and the yen are exerting an upward pressure on inflation, tepid consumer spending continues to tie it down. Getting consumers out of the deflationary mindset is crucial for the central bank, else their QQE effort would not bear the desired fruit. The rise in equities (DXJ) would also be short-lived.