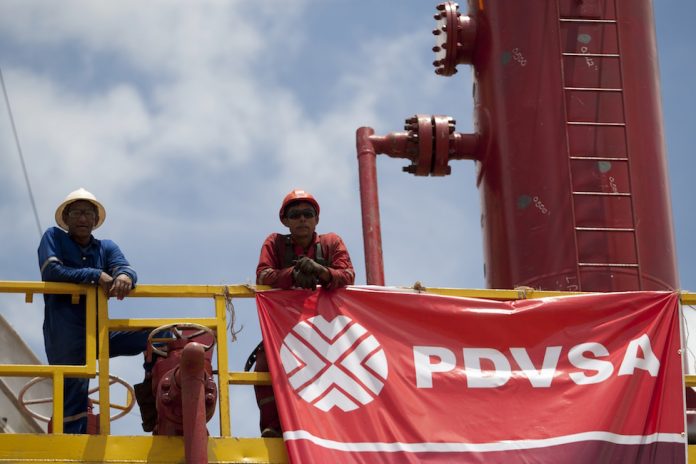 Just days after it was reported that more than 4 million barrels of Venezuelan crude and fuels were stuck at sea due to cash flow problems at state-run oil firm PDVSA (Petróleos de Venezuela), the government appointed new management and added a new position of Executive Vice President to help ‘defeat corruption’.

Keeping Eulogio Del Pino as President of PDVSA, Maduro was quoted by Reuters as stating that “we have to clean out the corruption that has incubated in (the oil industry), I call on the oil workers to forcefully defeat corruption.” He added “That’s why I have asked Eulogio del Pino … to lead this new leadership team and focus one hundred percent on the industry this year.” Maribel Parra, who Maduro identified as a rear admiral in the Venezuelan armed forces, has been appointed as the Executive Vice President.

The oil industry is crucial to founding OPEC (Organization of the Petroleum Exporting Countries) member Venezuela. According to OPEC data, oil revenues form a staggering 95% of the country’s export earnings while the oil and gas sector is a quarter of the nation’s GDP (gross domestic product).

Citizens of the country have had an exceptionally hard time due to sharp recessions and galloping inflation taking its toll.

According to the data available since December 2008, the lowest rate of inflation witnessed by Venezuela was 17.9% in October 2012. Note in the graph above that the latest data is as of December 2015. This is the most recent data that has been made available by Banco Central De Venezuela – the country’s central bank.

According to preliminary central bank statistics accessed by Reuters, inflation in the country surged by 800% in 2016 – the worst inflation on record. There are estimates that inflation may surge by 1,600%-1,700% this year. The aforementioned data also shows that the economy contracted 18.6% last year.

Due to the economic situation, the central bank cannot afford to raise rates as it will cause an even deeper recession in the economy. Thus, it needs to try to raise revenues and PDVSA is the easiest place to start if they want to put their house in order.

Reuters has accessed internal documents related to PDVSA which show that over 4 million barrels of the country’s crude are stuck in the Caribbean Sea as the company does not have money to pay for hull cleaning and other services.

The Reuters report informs that as of January 25, “1.4 million barrels of crude, diesel, gasoline, fuel oil and liquefied petroleum gas” is stuck as those ships need to be serviced.

Meanwhile, another 11 ships have been unable to reach their destinations due to “financial retention,” which means that bills issued by port authorities, inspection firms and others have remained unpaid leading to an embargo or temporary retention of these vessels. These 11, along with some other tankers, combine for another 2.9 million barrels of aforementioned shipments.

It would not be incorrect to say that Venezuela finds itself stuck between a rock and a hard place. A rise in crude oil prices (USO) would be inconsequential for a country which doesn’t have enough money to get its ships out to their destinations. Depending on whether the recent shakeup at PDVSA was a thinly veiled attempt to consolidate power or actually a move to reduce corruption at the oil firm, this could be at least one small step towards righting the ship(s).