In an attempt to manage scarce foreign exchange, the Central Bank of Nigeria has been rationing foreign exchange. Since August 2016, the Central Bank of Nigeria has intervened to hold the Nigerian naira at NGN 315 per USD. The central bank has also blocked importers of certain goods from participating in the interbank foreign currency market, leading the currency to trade at almost NGN 500 per USD in the parallel market.

The IMF (International Monetary Fund), however, has been calling on the monetary authority in Nigeria (GAF) (EZA) (CAFRX) (TRAMX) to move towards a market-determined exchange rate as a solution to the country’s foreign exchange liquidity crisis. However, for an economy which is largely import-dependent and with non-oil exports at only 26% of all exports, currency free-float may stand to damage more than repair the economy.

Fitch downgrades its outlook on Nigeria

Reasons cited for the downgrade in the Fitch report included: 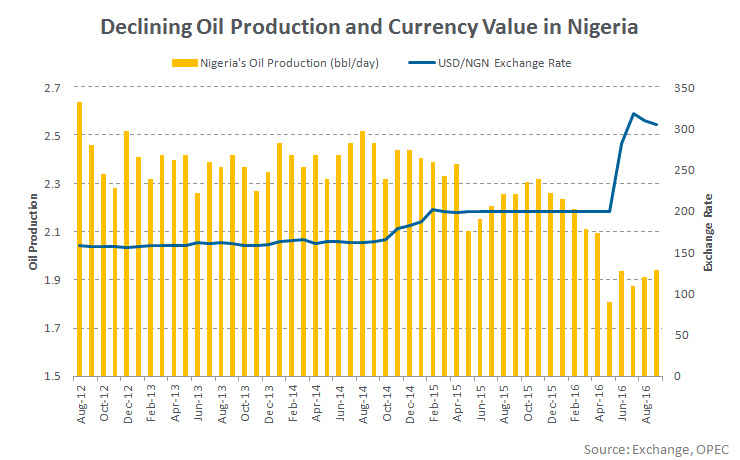 Oil, representing over 70% of the economy’s exports, contributes about 9% to this frontier market’s (FRN) (FM) GDP. The economy produces about 2.7% to the world’s oil supply. The Nigerian government’s revenue is largely dependent on the sector.

Moreover, its fiscal deficit continues to run in the negative, standing at -1.6% of its GDP in 2015. Although the economy is expected to grow at +1.5% in 2017 as opposed to contracting by -1.5% in 2016, low foreign exchange supply and a continued fiscal deficit would continue to deter growth in the region, according to Fitch.