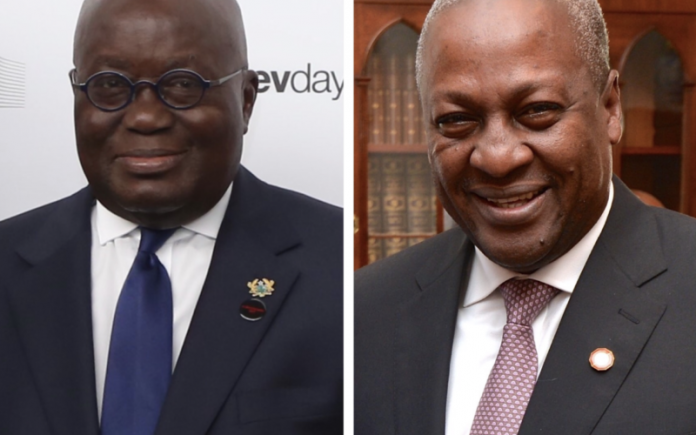 As Ghana’s current administration turns the corner on its halfway mark, the honeymoon period is over for President Nana Akufo-Addo. A formidable opponent has arisen in former President John Mahama, who recently won the bid to contest the 2020 elections on behalf of the National Democratic Congress (NDC). Improvements to the country’s macroeconomic story may not be enough to maintain support of the Ghanaian electorate and keep the NDC challenge at bay.

The Dawning of a New (new) Ghana

“We won’t go to IMF again”, Ghana’s Minister of Finance Ken Ofori-Atta defiantly pledged last month, just ahead of the end of the country’s 16th IMF bailout. Despite Ghana’s procyclical history, he asserted that sufficient gains had been made to the economy and that structures were being put in place to prevent a return to an IMF facility.

Halfway through the current administration’s first term, their narrative has been persistent: Ghana’s economy is on the right track and its fundamentals are strong. Strengthening this narrative is the markets’ response to Ghana’s $3 Billion Eurobond issuance in March, which was six times oversubscribed – the highest ever for a sub Saharan African bond sale. Standard and Poor’s (S&P) also upgraded Ghana’s sovereign rating from B- to B with a stable outlook in March, which represented Ghana’s first upgrade by S&P in ten years.

There are real indicators of positive growth – a successfully completed IMF program, strong investor interest, a domestic strategy ‘Beyond Aid’, a clean up of the financial sector, and a new terminal at Accra’s international airport. These strides, coupled with a tourism push to lure half a million visitors this year, and countless international companies seeking to set up shop in Ghana, should position the New Patriotic Party (NPP) for a clear win in 2020.

However, despite these benchmarks, Ghana is exhibiting a starkly different macro and micro economic story. The external appeal for investors differs from the internal reality for ordinary citizens. And unfortunately for this current administration, it is the latter that will turn up at the polls in 2020.

Led by their three-time candidate President Nana Akufo-Addo, the NPP government entered into office in January 2017 with ambitious plans to revitalize an economy drowning in debt, behind on arrears, brought to its knees by power outages, and plagued with widespread corruption.

Two years on and West Africa’s second largest economy is looking better. A main indicator of a better macro-fiscal has been the IMF program that the previous administration entered into in 2015, which was extended under President Akufo-Addo in 2017. According to the IMF’s final review under the Extended Credit Facility Arrangement, Ghana has seen significant improvements in the last two years. Ghana’s debt management has improved, structural reforms have taken shape, and strides have been made in cleaning up the banking sector. The IMF anticipates that overall GDP growth will remain strong at 7.6 percent in 2019. Despite these gains, however, it appears that perfect is the enemy of good for Ghanaians.

Failure to Reach the Electorate

Failure to produce change in the daily lives of citizens will have lasting effects on this Government, even in the midst of the macro-fiscal’s right direction. Despite growth indicators, changes to Ghana’s economic management have not directly impacted the pockets of Ghanaians yet. What has been felt in the pockets of Ghanaians recently is the worst performing currency of 140 currencies tracked by Bloomberg, fuel prices increases, and the Government’s tight hold on spending, which has had ripple effects on the economy.

A Crucial Year for President Akufo-Addo

Since 1993, when democracy was restored, Ghanaians have consistently given political parties two terms in government. However, the 2016 elections proved that Ghanaians are maturing as an electorate and predictions are not as straightforward as they once were (particularly observing the changes in voting patterns along regional and ethnic lines in the Ashanti, Volta and Northern regions.) This is a pivotal year for President Akufo-Addo to show Ghanaians the change he has been so eloquently speaking about since his campaign.

As long as the NPP spends the next 12 months focused on the everyday lives of Ghanaians- namely quality jobs, manageable prices for electricity and fuel, a stable currency, and an improved business environment, they will be well positioned to hold on to their power. This might necessitate that Presidential initiatives like the building of a national cathedral take a backseat.

Recent history tells us that Ghanaians will give the NPP government a second term. However, President Akufo-Addo’s promises for swift and visible change puts the administration in a tough position. The outcome of the 2020 election will largely hinge on the administration following through on micro-level wins that will create undeniable change in the lives of Ghanaians.

Afua is an analyst focused on geopolitical risk in Sub-Saharan Africa, and holds a Master’s degree in Public Policy from Harvard Kennedy School. As originally appears https://globalriskinsights.com/2019/04/ghana-akufo-addo-elections/