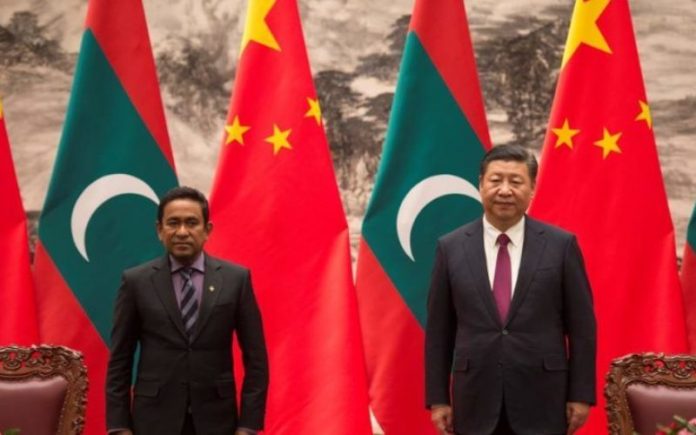 The Republic of Maldives is an important member of the SAARC and offers key strategic value to its allies, especially India. This article examines how a souring in relations between Malé and New Delhi, along with an unprecedented Chinese presence in the archipelago, raises geopolitical risks for India.

The situation in Maldives is not just about democracy. It also concerns the peace, stability and security of the entire Indian Ocean region, as explained by former Maldivian Foreign Minister, Ahmed Naseem. This situation refers to the collapse of democratic progress under the leadership of President Abdulla Yameen, who in February 2018 ordered a state of emergency and jailed opponents across the legislative and judiciary. A change in President has also simultaneously tipped a switch in preference for premier ally from India to China.

The importance of the Maldives

The Republic of Maldives is comprised of 26 atolls, holds a strategic position in the Indian Ocean Region (IOR) southwest of the Indian peninsula, and is situated along major sea lanes of communication. Most notably, it lies between the Gulf of Aden and the Gulf of Hormuz with the Strait of Malacca, which are the prime routes for oil exports and world trade. It is also a member of the South Asian Association for Regional Cooperation (SAARC).

Historically, India has been a major influencer in Maldivian economic development, providing social and financial aid, and acting as the first responder to offer assistance. Famously, the Indian army helped foil a coup against President Maumoon Gayoom in 1988, landing at Hulhule airport just 16 hours after receiving a request from the leader.

However, in order to counterbalance New Delhi’s position, President Yameen has increasingly leaned towards China in an effort to expand economic opportunities, and he has broken from the tradition of adopting an ‘India First’ foreign policy. His action of illegally terminating a $500 million contract with Indian firm GMR for expanding the airport facilities caused ties with New Delhi to plummet to an all-time low. Strained diplomatic relations were further compounded in June 2018, when India denied entry to a Maldivian parliamentarian for health check-ups. Maldives has retaliated by holding up thousands of work permits to Indians, with public advertisements from companies stating “Indians need not apply”.

Concurrently, Indian retrenchment has been substituted by Chinese presence. Until 2012, Beijing did not even have an embassy in Maldives; whereas in 2018, Chinese investments are estimated at over $1.5 billion. This has caused Maldives to become a potential flashpoint in regional discontent and raises geopolitical concerns for India that finds itself unable to rely on a historically close ally for economic, cultural, and security ties.

This section discusses the reasons why India perceives a Chinese presence in Maldives as a geopolitical threat. Firstly, Maldives has agreed to be a part of the Chinese Belt and Road Initiative (BRI) – a development strategy to forge a 21st century Maritime Silk Road, increasing connectivity among  Eurasian countries and promoting uniform economic development. India has consistently opposed this agreement, citing the need to respect sovereign boundaries and national security. India’s stance is, however, an increasingly isolated one in the neighbourhood, with Maldives, Myanmar, Nepal, Sri Lanka and Pakistan all considering to join China’s initiative. This will result in the Indian coast being surrounded by Chinese dominated ports. While the BRI serves to improve connectivity, it also erodes the Indian sphere of influence and increases its neighbours’ dependency on Chinese infrastructure. Diminishing the potency of a regional power through a multilateral effort is a familiar strategy employed by Beijing, and its enhanced capacity to become the first responder in the region holds severe implications for India’s leadership in South Asia.

Secondly, the Chinese have responded to President Yameen’s actions by making quantum investments in the country. This has raised questions about a Chinese ‘debt trap’ — a term that refers to China taking over infrastructure projects when the beneficiary country cannot repay loans — being employed. Currently, 60% of Maldivian economic debt is accounted for by Chinese development projects and translates into payments of $92 million annually, or 10% of the entire Maldivian budget. At the end of 2018, public debt will be 60% of GDP and is set to rise to 121% by 2020. While rapid scale-ups in infrastructure can result in economic development, they are almost certain to leave Maldives over-exposed to Chinese debt because the local economy is not diversified. The country is heavily reliant on tourism to generate revenue and employment opportunities and is now increasingly dependent on China for tourists and a $800 million airport expansion plan. .

Indian concerns arise from the possibility of Maldivian insolvency, in which case Chinese assistance could turn into management of economic resources through debt-leverage and land grabs. Another Indian ally, Sri Lanka, had to formally relinquish 85% of the Hambantota Port, which provides critical access to the Indian Ocean sea lanes, to China on a 99-year lease after failing to service its debt.

President Yameen has frequently been criticised by opposition members for ‘handing over’ Maldives to China because its economic influence has the ability to impact legislative change. In 2017, a thousand-page Free Trade Agreement with China was passed in Maldives’ parliament after less than an hour of discussion. Laws were also changed to allow foreigners to buy land, which has led to Chinese acquisition of 16 islands for development projects.

Despite Maldivian and Chinese assurances, India is concerned about the possibility of a Chinese naval presence in the IOR. Should China choose to reinforce its military presence here, it is highly unlikely that India would be able to retaliate in kind. The military expenditure of India has significantly declined in recent Union Budgets, signalling the unwillingness to militarily engage unless absolutely necessary. A realist approach would highlight the asymmetry in power between the two Asian giants when extending their influence.

Thirdly, Maldives’ shift in allegiance to China has allowed internal security threats to go unchecked – the Chinese model of non-intervention in domestic functions makes it indifferent to local problems. Maldives has seen a steady rise in Islamic fundamentalism brought about by Saudi-sponsored preachers, and has the highest per-capita departures of fighters to join the Islamic State. India perceives this as a national security threat because it has been the target of multiple terrorist attacks planned within Pakistan and Bangladesh by the same radical groups that are now operational in the archipelago. With its waning influence, India cannot urge the Maldivian government to curb rampant extremism.

While India does not have the ability to offer the same economic incentives to Maldives, it is likely in the short to medium term that it will engage to re-strengthen diplomatic relations and provide assistance in internal security matters. This is a niche not covered by China and it could allow India to reclaim the ability of being first responder and the opportunity to safeguard national security for both itself and Maldives.

Malvika Singh holds an MSc in Comparative Politics with a specialisation in Political Economy from the London School of Economics and a BA Honours in Politics from the University of Nottingham. Article as originally appears https://globalriskinsights.com/2018/07/indias-concerns-over-the-strengthened-china-maldives-relations/