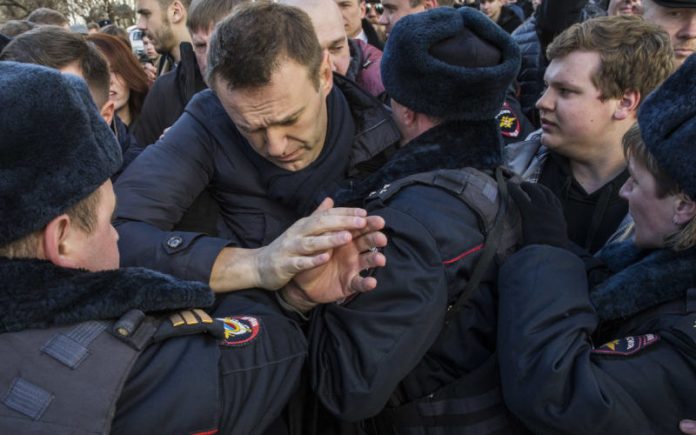 The latest investigation by the Russian Anti-Corruption Foundation, led by opposition activist Alexei Navalny, found that they have been censored from the Russian Internet with surprising speed. It took two days for the national IT regulatory body to begin issuing warnings to media and providers.

The evidence revealed, via a social media account of escort model Anastasia Vashukevich, also known as Nastya Rybka, features photos and videos of Prikhodko caught aboard Deripaska’s private yacht. Navalny claimed that the oligarch bribed the high-ranking official by hosting Prikhodko on his yacht.

Navalny and the Anti-Corruption Foundation previously made considerable gains regarding their investigations into the business empire of the son of Russia’s prosecutor general and into Prime Minister Dmitry Medvedev’s corruption involving charity funds, yet none of the scandals elicited such an immediate and unambiguous reaction as the new inquiry, dubbed as Rybkagate.

The day after the inquiry’s publication, a local court in Ust’-Labinsk, a small town in the southern Krasnodar region and Oleg Deripaska’s hometown, ruled that the presented materials infringe upon Deripaska’s privacy. Provided with legal grounds, the Russian IT regulatory body, Roskomnadzor, entered the investigation into the registry of banned content.

Besides promptness, the reaction to the Rybkagate scandal was surprising with its comprehensiveness. After publication, at least four online news media outlets received demands from Russia’s Roskomnadzor to remove reports about the investigation from their respective websites. Alexei Navalny called for his supporters to help disseminate the information, however likely unheard – as Navalny’s entire blog was included in the registry of banned information along with his investigation.

The state’s control over the Internet has been on a clear upward trend since the early 2010s. In 2012, Roskomnadzor set up a unified registry of banned content that served as a guideline for Internet providers who were obligated to block those on the list.

Initially planned as a mechanism to monitor websites with harmful content, i.e. child pornography, the registry quickly became a tool targeting content with opposing views. The process escalated after 2011, especially after the Ukrainian crisis of 2014, when several independent news media outlets were blocked for what Roskomnadzor interpreted as a call for mass riots.

In addition, opposition activists in Russia frequently report Distributed Denial of Service (DDoS)-attacks, which are conducted in a seemingly organized way at critical times. For example, similar attacks occurred during the anti-corruption protests in March 2017, that were organized in different parts of Russia through online campaigns.

Starting in 2016, Roskomnadzor began pushing international companies to comply with national law regarding personal data that requires all account information belonging to Russian citizens to be held on servers within the country’s borders. Most Internet giants, i.e. Facebook and Google, were exercising similar methods at the time and were under threat of losing the Russian market to Roskomnadzor’s blocking.

Eventually, most major players in the industry agreed to transfer their data to Russia-based servers. The only exception was LinkedIn, which refused to comply and was permanently blocked in Russia by the end of 2016.

The most recent update was made in late 2017, when the State Duma adopted a new law that bans the use of virtual private networks (VPN) and other anonymizers in Russia. Although many Russian officials admit that the legislature is unlikely to eliminate the use of anonymizers, the range of access options available to Russian users is becoming uncomfortably slim.

German Klimenko, an Internet adviser to president Putin, has been openly promoting a similar China-style control over Russia’s Internet. Most recently, Klimenko claimed that Russia is technically prepared to become completely cut off from the global web. In Klimenko’s view, this situation could occur if the West orchestrated a measure against Moscow, and may not result in much damage because the Runet is already a self-sufficient market with services and information already provided to local users.

It is easy to interpret Klimenko’s words as a sign of continued tightening of the Kremlin’s control over Russian Internet. The demands for more control is clear, with the blocking of the Rybkanet’s investigation a vivid demonstration of the Roskomnadzor power, it seems very unlikely that the authorities would go all the way to recreate the Great Firewall of China.The opportunity to construct a firewall at a minimal cost has been lost, as the Runet has made its giant leap forward in the late 1990s – early 2000s and flourished under almost complete freedom.

Even more important is the fact that the authorities have yet to face the fact that Russians consume a lot of foreign content, from social media to YouTube channels in Russian to Netflix shows. The profile of this audience is considerably wider than the Moscow-based liberal bubble that the Kremlin has been simply ignoring so far, and that renders the idea of a self-sufficient Runet politically an unlikelihood. The most likely form of control could show itself as a smooth cooperation between the courts and Roskomnadzor – exactly the way it happened with Rybkagate.

Yaroslav Makarov has worked as a political and economics reporter for two leading Russian news agencies and spent five years as a foreign correspondent in Japan. As originally appears https://globalriskinsights.com/2018/03/russian-authorities-speed-up-control-over-runet/