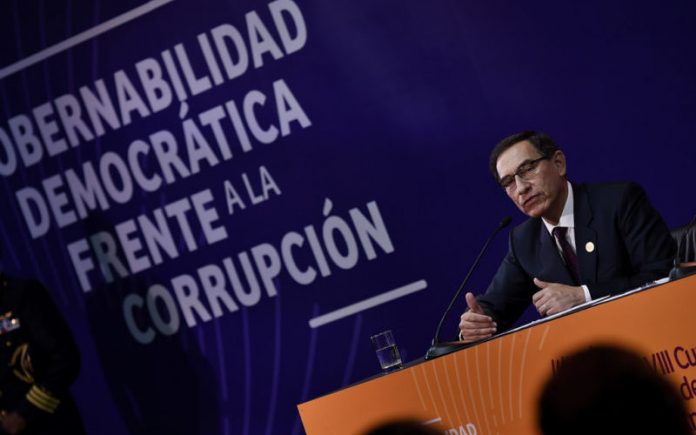 As yet another corruption scandal reverberates through Peru, polling shows that citizens are disappointed with their government and doubting democracy itself. If new president Martín Vizcarra fails to lead Peru past the wrongdoing that has plagued its government for decades, Peru could fall into a democratic crisis.

On Saturday, Peruvian president Martín Vizcarra called for a national referendum on judicial and political reforms aimed at tackling the country’s widespread corruption. The week previous, he asked congress to debate the ouster of the country’s magistrates “in light of the evident acts of corruption and crimes”. These extraordinary moves come after recordings were released that chronicle widespread influence peddling between dozens of senior judicial officials and organized crime gangs. The judicial branch is only the latest Peruvian democratic institution to face a corruption crisis, after President Vizcarra himself assumed the presidency after the resignation of his predecessor due to corruption allegations. In fact, all six living Peruvian presidents have either been imprisoned, implicated, or investigated for corruption.

Polling shows that Peruvians are weary of these scandals, and that they have negatively affected their opinion of democracy itself. Surveys conducted in May, before the most recent round of corruption scandals, indicate that 62% of Peruvians are worried about financial and political corruption in their country, compared to 35% worldwide. This is enough to make Peruvians the most concerned among the 28 major countries surveyed. Confidence in democracy has followed a similarly troubling trend, with only 45% of Peruvians indicating that they support it, the lowest approval level in a decade. Upcoming polls will likely find that the situation has worsened, as anti-corruption protest marches have begun and there are movements to fly the Peruvian flag at half-mast during its Independence Day celebrations.

When he assumed office in March, president Vizcarra pledged to curb corruption “at all costs”. While this commitment may cause déjà vu among corruption-weary Peruvians, Vizcarra is one of very few Peruvian leaders that has any chance of bringing it to fruition. Most political decision makers that have the ability to reform the system have themselves been embroiled in corruption scandals. Key stakeholders in the public and private sectors have benefitted greatly from the status quo, and thus have little incentive to right the ship. Though Vizcarra faces substantial headwinds in his quest to clean Peru’s political system, there are three key indicators to watch that would suggest his attempts will be successful:

Firstly, if he pays close attention to the governmental structures that will enable his success. A clean, independent judiciary is a vital pillar of any successful anti-corruption campaign, so he should continue to enact drastic actions to clean out any wrongdoers.Firing wrongdoers and leading thorough reviews is a good start, but he should also be sure to identify and place an untainted crop of new magistrates lest a new judiciary display the same problems as the old.

Secondly, if he heavily leverages the Peruvian people’s dissatisfaction with corruption. It is clear that many politicians have an incentive to inhibit the success of his initiative, so Vizcarra must mobilize the citizens that they supposedly represent and pressure the politicians to either clean up their act or resign. Though Vizcarra’s approval rating has fallen precipitously to 37 percent from his initial figure of 57 percent, he still is far more popular than any other Peruvian politician. By calling a referendum, he has taken am first step toward uniting the Peruvian people behind him.

Thirdly, if he creates a functional relationship with the powerful politician Keiko Fujimori. While Vizcarra’s lack of political history and party affiliation makes him feasible as an anti-corruption crusader, it puts him in a weak position compared to Fujimori, who helms Fuerza Popular and controls a healthy congressional majority. Since the Peruvian constitution grants disproportionate power to the unicameral legislature, any major proposition by the Vizcarra government will require the de facto sanction of Fujimori. Fujimori herself is under investigation for corruption and money laundering and wasmentioned as a potential co-conspirator in the same recordings that revealed wrongdoing in the judiciary, so conflict between her and Vizcarra’s anti-corruption crusade may be inevitable. Nonetheless, if he is to expect any major success in his administration’s objectives he must find a way to at least maintain a temporary alliance.

Outlook: what if he fails?

Vizcarra is faced with the unenviable task of confronting corruption and reinvigorating the legitimacy of his government in the eyes of the Peruvian people. He will likely find that much of the Peruvian government is hostile to his cause. Since he is one of a very small group of Peruvian politicians that has a realistic chance of reforming the system, his failure could prove the final straw for citizens. Peru’s democracy is already lacking strong institutions and leadership, and the further exasperation and disenfranchisement of its citizenry would make it susceptible to power grabs. The end result of Vizcarra’s failure could be a state where establishment and anti-establishment strongmen compete for power.

Arthur Williams is a Consultant in the Kuala Lumpur office of Kaiser Associates, a management consulting firm. Article as originally appears  https://globalriskinsights.com/2018/09/corruption-peru-democratic-institutions/